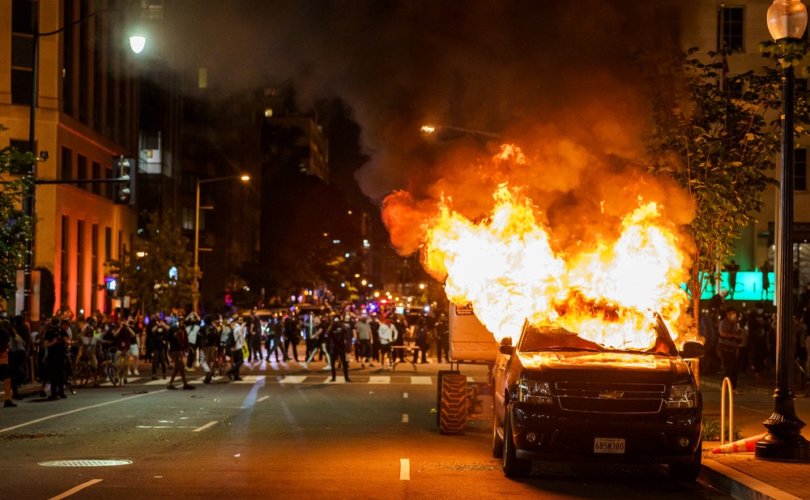 A Black Lives Matter riot in Washington, DC in May 2020shutterstock.com

February 1, 2021 (LifeSiteNews) – Norwegian member of Parliament Petter Eide has nominated Black Lives Matter (BLM), the pro-abortion “social justice” movement responsible for a torrent of riots and violence following the death of George Floyd in the summer of 2020, for the Nobel Peace Prize, The Guardian reported.

Eide, a member of the Socialist Left Party in the Norwegian Parliament, made the nomination on the grounds that BLM is “advancing a global push toward racial justice.” In a supporting statement for the nomination, the politician praised BLM’s ability to “mobilise people from all groups of society, not just African-Americans, not just oppressed people, it has been a broad movement, in a way which has been different from their predecessors.”

According to Eide, “one of the key challenges we have seen in America, but also in Europe and Asia, is the kind of increasing conflict based on inequality. Black Lives Matter has become a very important worldwide movement to fight racial injustice.”

“BLM's call for systemic change have spread around the world, forcing other countries to grapple with racism within their own societies,” he added.

On Friday, the organizers of BLM tweeted this response to the news of their Nobel peace prize nomination: “We hold the largest social movement in global history. Today, we have been nominated for the Nobel Peace Prize. People are waking up to our global call: for racial justice and an end to economic injustice, environmental racism, and white supremacy. We're only getting started.”

Defending his nomination of a movement like BLM for the Peace Prize, Eide asserts that there is an historical precedent for “doing this. It’s a strong linkage between antiracism movements and peace, and a recognition that without this kind of justice, there will be no peace and stability in the society.”

Whilst Eide is correct to note that BLM “have had a tremendous achievement in raising global awareness and consciousness about racial injustice,” he neglects to admit BLM’s part in the sharpening of racial identity politics.

In fact, Eide claims that “[s]tudies have shown that most of the demonstrations organised by Black Lives Matter have been peaceful.” Unwilling to lay any blame on BLM rioters for the violent conflicts arising during their protests, Eide says that “Of course there have been incidents, but most of them have been caused by the activities of either the police or counter-protestors.”

The data on BLM’s history of demonstrations run contrary to this assertion. Axios reported in September 2020 that the rioting and looting resulting from BLM protests “in 140 U.S. cities” amounted to the largest insurance damages claims in American history, reaching up to a staggering $2 billion.

Beside the astronomical costs to private and public property stands the cost of human lives. In the three months that followed the death of George Floyd, “30 people were killed, and 14,000 people arrested in American protests alone,” The Critic reported.

During one such riot in Philadelphia, Pennsylvania, the Daily Wire reported that 11 people were shot, and that “looters were shooting looters,” as the protest spiralled out of control. In the midst of the violence, 30 police officers were injured whilst attempting to control the situation.

BLM activists were even found to bring violence to the Million MAGA March in November last year, an event to support Donald Trump’s fight for a fair election. After demonstrators had spent the day peacefully marching through the nation’s capital, BLM and Antifa protestors descended on the city, provoking and fighting with Trump supporters, resulting in some hospitalizations as well as damage to public property.

Beyond supporting the violent displays recorded across the country and, indeed, the world, the Black Lives Matter organization also supports the destruction of “the Western-prescribed nuclear family,” or the normal family structure of mother, father, and child. The group makes the claim that the world is in the “tight grip of heteronormative thinking, or rather, the belief that all in the world are heterosexual (unless s/he or they disclose otherwise),” and that this must be opposed.

Additionally, the Black Lives Matter organization is ardently pro-abortion, stating that people “deserve and thus we demand reproductive justice that gives us autonomy over our bodies and our identities while ensuring that our children and families are supported, safe, and able to thrive.” The term “reproductive justice” is used as a euphemism for abortion.

Until September 2020, BLM proudly boasted their pro-abortion and anti-family beliefs on their website, under a section named “What We Believe.” The page displaying this information has since been removed.

Eide concluded his 2000-word nomination statement on a note of irony, calling BLM “the strongest global force against racial injustice,” and that awarding “the peace prize to Black Lives Matter … will send a powerful message that peace is founded on equality, solidarity and human rights, and that all countries must respect those basic principles.”