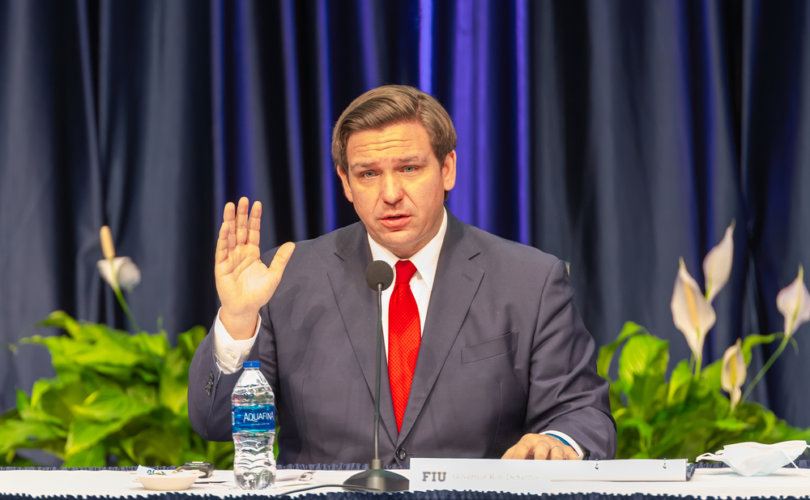 (LifeSiteNews) — Florida’s Republican Gov. Ron DeSantis suggested Tuesday the U.S. should pull back on its close diplomatic ties to Australia in response to the country’s authoritarian COVID-19 lockdowns and brutal treatment of private citizens by police and military.

“Look at what’s going on in Australia right now,” DeSantis said during a speech late Tuesday in Tampa, Florida. “After a year and a half they’re still enforcing lockdowns by the military.”

“In fact,” the governor added, “I wonder why we would still have the same diplomatic relationships when they’re doing that.”

DeSantis: “In Australia right now, after a year and a half, they’re still enforcing lockdowns by the military…Is Australia freer than communist China right now?…The fact that’s even a question tells you something has gone dramatically off the rails.”pic.twitter.com/YKQ5yAwg4K

“Is Australia freer than China? Communist China, right now?” DeSantis asked. “I don’t know. But the fact that that’s even a question tells you something has gone dramatically off the rails.”

The Australians had taken to the streets to protest against the city’s sixth lockdown as well as COVID injection mandates imposed upon tradespeople.

Under current lockdown orders, citizens are subject to curfew, banned from public gatherings, and forbidden to venture beyond a strictly limited area outside their homes.

Images emerging from the protests have shown Australian police wearing tactical gear while engaging in controversial and aggressive tactics to disperse crowds and deal with individual protesters.

“All those arrested will be issued with penalty notices for breaching the [chief health officer’s] directions,” Victoria Police said in a statement. “Police are disappointed to see the number of people who are continuing to breach the CHO directions and will continue to arrest and fine them if they are found to be in breach of the CHO directions.”

Victoria police, who have used tear gas, pepper balls, and stinger grenades against protesters, while footage also shows them tackling and choking noncompliant Aussies, have warned they will be “less tolerant” of anti-lockdown protesters in future confrontations.

Florida’s governor has not been the only one to notice the brutality of Australia’s public health regime.

The nation has drawn sharp international criticism for its draconian procedures and brutal enforcement strategies, with even the New York Times wondering, “Has Covid Cost Australia Its Love for Freedom?”

In his comments Tuesday, DeSantis warned against thinking that the same totalitarianism inflicted upon Australians under the guise of COVID protocols could not happen in the U.S.

It is unclear in what ways DeSantis might suggest the U.S. amend its diplomatic relationship with Australia.

A move by the federal government to distance itself from Australia due to its COVID strategy would likely have a profound impact upon the nation’s decision-making, since the country has long relied upon the United States for protection against potential conflicts with China, its Indo-Pacific neighbor and longtime geopolitical adversary.

The Chinese Communist Party (CCP) has repeatedly signaled its intentions to expand its power in the region over the past year, subsuming Hong Kong and making repeated threats to take over Taiwan.

In June, China threatened to engage in a full-scale nuclear war with Japan if the island nation interfered with future attempts by the CCP to gain control of Taiwan.

Meanwhile, the Biden administration has entered into a security pact with Australia as well as India and Japan, agreeing to share nuclear propulsion technology in a bid to shore up resources against China and its rapidly growing military might.

On September 21, ahead of a meeting with Australian leader Scott Morrison during the United Nations general assembly in New York, President Joe Biden reaffirmed that “[t]he United States has no closer or more reliable ally than Australia.”

It remains to be seen whether DeSantis will lodge a formal request for the U.S. to take diplomatic action to attempt to reign in Australia’s “off the rails” COVID strategy.

The governor has repeatedly affirmed that he will continue “fighting back” against Biden, particularly with regard to COVID-19 jab mandates which are leading to the firings of thousands of unvaccinated workers, including healthcare professionals.

The governor said he will continue to “stand up for people’s freedoms and their livelihoods.”

“When Biden is violating the Constitution, we are going to be on the frontlines,” DeSantis pledged, saying “that is the least that we can be doing.”