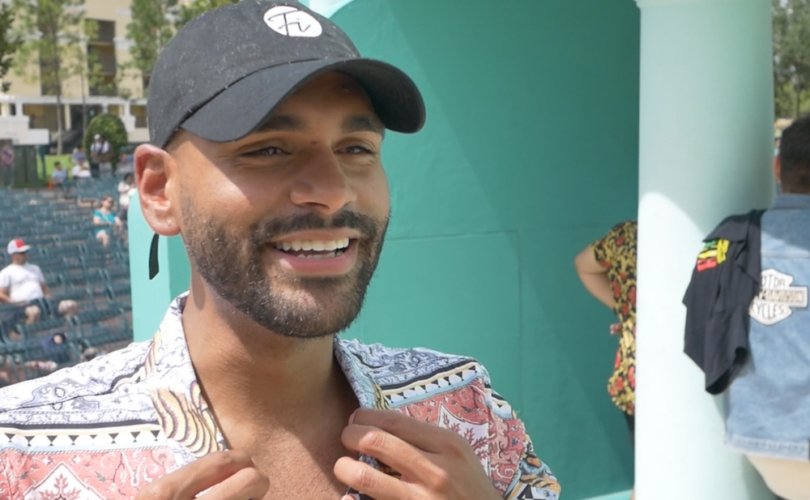 ORLANDO, Florida, September 16, 2019 (LifeSiteNews) – Three years after the Pulse Nightclub massacre where 49 homosexual men died, ex-homosexuals and ex-transgenders came to Orlando from around the country to publicly proclaim the freedom they’ve found through Jesus Christ.

At the outset of the event — held at Lake Eloa Park which is about a 5-minutes drive from the Pulse Nightclub — shooting survivor Luis Ruiz set the record straight about something secular media and LGBT activists consistently get wrong: Conversion.

“This is not conversion therapy,” proclaimed Ruiz to the cheers of the crowd.

“This is not electrotherapy.  This is not shock therapy,” he continued.

“This is all the Holy Spirit,” and about “a man who died on a Cross,” said Ruiz.

“This is not a gay to straight thing: This is a lost to saved thing,” he added.

“Change is possible,” said Angel Colon, another Pulse Nightclub survivor. Colon sustained six bullet wounds that night and had to learn how to walk again.

“Jesus wants your heart,” he explained to LifeSiteNews. “He doesn’t just want your (sexual) identity. He wants everything of you.”

The presence of these men and women who formerly lived homosexual or transgender lifestyles is an inconvenient truth for those who claim that same-sex attraction and transgenderism are immutable, irresistible characteristics.

The June 12, 2016 Pulse nightclub shooting was carried out by Omar Mateen, a 29-year-old security guard who pledged his allegiance to the Islamic State before killing 49 people and wounding 53 others in the worst act of terrorism on U.S. soil since 9/11. While the tragedy has been used to promote a greater acceptance of homosexuality, evidence shows that the Mateen was likely himself a homosexual who visited the Pulse club and other gay bars dozens of times over years, used a homosexual dating app, and asked a male classmate out on a date.

For over four hours on a brutally hot, sunny Florida afternoon, one after another took the stage to declare freedom from their former ‘identity’ as ‘gay’ or ‘trans. ’  And this happened through a real, personal experience purposefully turning away from the empty promises of the world and to the person of Jesus Christ.

Former lesbian activist Charlene Cothran said she is proud to “stand with her brothers and sisters from across the country and show the entire world that we are free from homosexuality” and other LGBT-based lifestyles.

“In a world and in a culture where people believe that can’t happen, we are the evidence,” said Cothran, “and that’s what I represent.”

A pivotal moment occurred in Cothran’s life in 2004 in Chicago, at an event attended by “thousands upon thousands” of fellow African American lesbians and homosexuals whom she had previously urged to “go and tell your parents that you are gay or lesbian. Be proud of it!”

“We taught people ‘gay theology’ through the pages of my publication,” said Cothran.

According to Cothran, “The Lord said, ‘Look around you. This is leading people to destruction.  Look at the generation who’s coming behind you,’ and conviction fell upon me like never before on that day.”

Later, “I gave the Lord a complete and total ‘Yes,’” declared Cothran.

“There are so many people that are saying … ‘my convictions are not to pursue a gay life,’ said Ken Williams, who traveled from California to attend the Freedom March. “There are thousands of people like that who are looking for help.”

Williams is a former homosexual, now a married father of four and is co-founder, along with Elizabeth Woning, of Equipped to Love, a ministry through which they draw upon their combined experiences of walking away from homosexuality to help others.

“Our stories are that God met us and led us out of that life, into great fulfillment,” Williams told LifeSiteNews. “So I stopped being suicidal, after I found encouragement to leave that life.”

“And so that’s all we’re doing. The people that are coming and asking ‘Is there any encouragement for me to leave [homosexuality]?’ We’re saying, ‘Absolutely, that happened for us,’” he added.

Woning sees the attempt to discredit and outlaw all resources aimed at helping those with unwanted same-sex attraction as an assault on Christianity.

“The LGBT community has the right to pursue whatever they want,” said Woning, “we should also be able to do that.”

Gabriel Pagan, who left homosexuality seven years ago, said those who dismiss the testimonies of people who have walked away from LGBT lifestyles just don’t understand that what he and others at the Freedom March are talking about is a “work of Jesus.”

I’m the happiest I’ve ever been in my life,” Pagan told LifeSiteNews.

“No conversion therapy,” he added.

Pagan, who recently became engaged to his girlfriend, said he is “over the moon excited” about his upcoming wedding.

Reflecting upon the night he was trampled in the melee at the Pulse Nightclub, Luis Ruiz said it was a “tragic event but the Lord used it for good.”

“Now I am sharing the love of Jesus,” explained Ruiz, who has often said he could have easily been the ‘fiftieth victim’ killed by the shooter.

“People are being radically changed,” he said.  “Not just a little change.  They want Jesus.”

While most of the Freedom March organizers and participants are not Catholic, perhaps it’s no coincidence that this event was held on the Feast of the Exultation of the Holy Cross, when Catholics celebrate the triumph of the Cross of Christ.