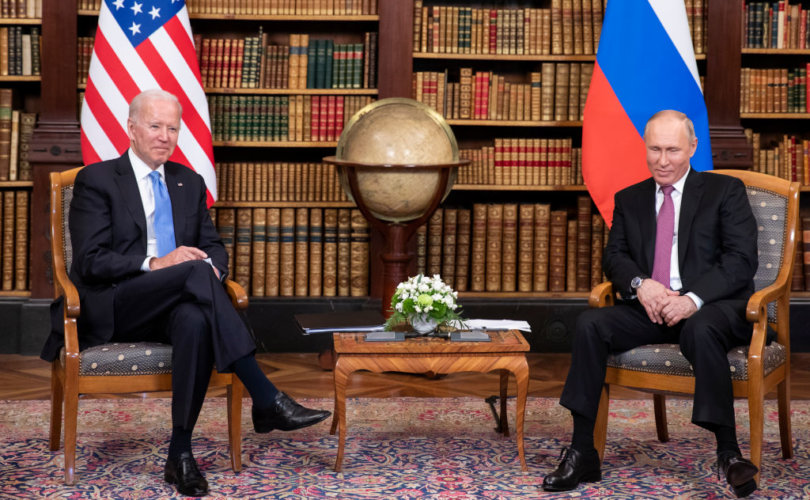 (LifeSiteNews) — A group of U.S. intellectuals – journalists, political advisers, and scholars – have signed an open letter to President Joe Biden (see full text below), pleading with him to reject policies which lead to an “intensification of conflict with Russia” and which “could lead to the deaths of millions of innocent people.”

The open letter, entitled Not in our name, cites Biden’s recent request to the U.S. Congress for $33 billion in taxpayer funds to support Ukraine militarily in its conflict with Russia. “We reject your heightened escalation of this conflict as dangerous and a provocation,” the signatories state.

The letter also references what Russian Foreign Minister Sergei Lavrov has described as the “serious” risk of nuclear war over the conflict in Ukraine.

Among the signatories are notable personalities such as Judge Andrew Napolitano, the filmmaker and humanitarian activist Jason Jones, LifeSite’s own founders Steve Jalsevac and John-Henry Westen, as well as political activists such as Jack Maxey, Jack Posobiec, and Michael Yon.

Catholic clergy and journalists are represented by Bishop René Gracida, Father David Nix, as well as by the editors of Catholic outlets such as Crisis Magazine, Catholic Family News, and Canon212.com.

The signatories conclude the open letter with the words:

At this dangerous moment in history, the U.S. must exert its power to become a force for just peace, urging Russia and Ukraine to come to the negotiation table in order to agree on compromises that would enable and ensure peace in the region.

The U.S. should not engage in a policy of intensification of conflict with Russia that could lead to the deaths of millions of innocent people. There are grave consequences of cumulative provocations.

Other scholars, journalists and other personalities of public life are invited to still sign this open letter and to give their support to this anti-war message by writing to [email protected]

A public petition linked to this letter can be signed here.

Not in our name (Full text and list of signatories)

The undersigned strongly and unambiguously express their opposition to your policy with regard to Ukraine. Your strategy is edging the world closer and closer to a nuclear war with Russia, and to another world war. Recently, you requested Congress for even more funds to be sent to Ukraine in order to help them buy more weapons for the military conflict with Russia. “So we need to contribute arms, funding, ammunition … so that they continue what they are doing,” you said on April 28 when asking for some more $33 billion in taxpayer funds to support Ukraine. “Robust military assistance” for Ukraine is your expression. Reuters reported that “President Joe Biden asked Congress for $33 billion to support Ukraine” and called it “a dramatic escalation of U.S. funding for the war with Russia.” At the same time, the U.S.-led NATO April 27 meeting in Ramstein, Germany urged NATO members to provide more military support to Ukraine, with Germany promising to send 50 self-propelled Cheetah anti-aircraft weapons. We reject your heightened escalation of this conflict as dangerous and a provocation.

The response from Russia? Just days before Biden’s appeal to Congress, Russian Foreign Minister Sergei Lavrov responded to the increased U.S. military support of Ukraine by saying there was a “serious” risk of nuclear war over the conflict. “It’s real. It shouldn’t be underestimated,” he stated.

Do we want to risk a nuclear war with Russia over a regional conflict in Eastern Europe?

The independent journalist Glenn Greenwald just recently stated, “Whatever your views on the moral dimensions of this war, it’s hard to deny this is the most dangerous moment in US foreign policy in two decades. Every week, US/NATO involvement in the war intensifies, as Russia explicitly warns of nuclear war. For what?”

We hereby declare that your escalation of this conflict as the President of the United States has not been done in our name.

Nor did you act in our name when you, as Vice-President of the United States, were involved in the 2014 coup in Ukraine that toppled the officially elected leadership of Ukraine. At that time, a telephone conversation of your collaborator Victoria Nuland (Assistant Secretary of State under President Barak Obama) revealed how she discussed which leaders should be placed into the new government in Ukraine. The transcript of that conversation also exposed your own direct involvement in this interference with a foreign nation state. This intrusion into the internal affairs of a sovereign nation was not done in our name, either.

You designated this same official, Victoria Nuland, now as the Under Secretary of State for Political Affairs. In that position, she has recently had to admit that Ukraine does have bio labs and that the U.S. is involved in them and is worried what Russia would do with its dangerous content should they get a hold of it. “Ukraine has biological research facilities which in fact we are now quite concerned Russian troops may be seeking to gain control of,” Nuland said. “So we are working with the Ukrainians on how they can prevent any of those research materials from falling into the hands of Russian forces should they approach.” Some of those very same Ukraine bio labs are ones that your own son, Hunter Biden, only months after the U.S.-led political coup in Ukraine in 2014, invested money by way of the U.S. Company Metabiota which is working with the Department of Defense. Additional evidence has been recently unearthed, effectively proving the U.S.’s involvement in Ukrainian bio labs.

This strange and troubling U.S. involvement in bio labs at the border of Russia – with direct involvement of your own family –  is not done in our name, either.

And let us also remind you that the United States does not have a good moral standing when it comes to condemning unjust wars of aggression. Recent U.S. history demonstrates a pattern of multiple military invasions of sovereign states – or military and tactical support for others to do so – most prominently the unjust 2003 invasion of Iraq with hundreds of thousands of civilian casualties, but also in Afghanistan, Libya, and Syria.

At this dangerous moment in history, the U.S. must exert its power to become a force for just peace, urging Russia and Ukraine to come to the negotiation table in order to agree on compromises that would enable and ensure peace in the region.

The U.S. should not engage in a policy of intensification of conflict with Russia that could lead to the deaths of millions of innocent people. There are grave consequences of cumulative provocations.

Not in our name, Mr. President.

You can sign the petition in opposition to U. S. escalation of war with Russia here

The Most Reverend Bishop René Gracida

The following signatories have added their names after the initial publication of the open letter.