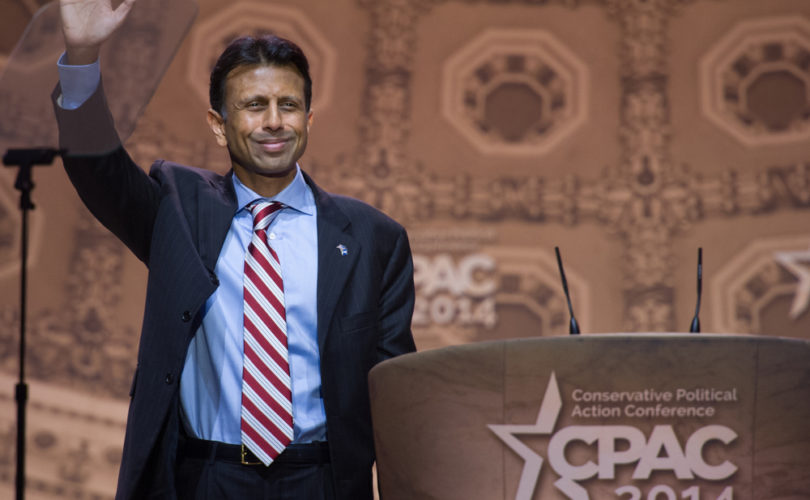 The 44-year-old announced he was suspending his presidential campaign last night on Fox News.

“I've come to the realization that this is not my time,” he told Fox News anchor Bret Baier.

After a promising political career capped off by two successful terms as governor of Louisiana – and a string of pro-life policies applauded by the right to life movement – Jindal found himself unable to break out of the bottom tier of an unusually crowded field.

“Governor Jindal's keen intellect, combined with his passion to uphold the principles and ideals that have made America an exceptional nation, made him an attractive candidate for president,” said Family Research Council President Tony Perkins.

Jindal served as President George W. Bush's Assistant Secretary of Health and Human Services before being elected to Congress. He won his second bid for governor against Democrat Kathleen Blanco in 2007, after her widely criticized handling of Hurricane Katrina. He coasted to re-election four years later.

Jindal vowed “to protect the unborn” when he formally entered the presidential race in June. In debates, he promised to prosecute Planned Parenthood for trafficking in human organs.

He halted the construction of a massive, 8,000-square-foot Planned Parenthood abortion facility in New Orleans and attempted to defund the abortion provider after videos shot by the Center for Medical Progress raised questions about the legality of its fetal tissue donation program.

When Planned Parenthood activists protested his actions outside the governor's mansion, Jindal screened the undercover videos for them, a shrewd tactic that quickly dispersed the crowd.

He backed Kim Davis' right to a religious accommodation and promised to fight Hollywood and Wall Street on behalf of traditional values.

He believed once he got on the debate stage against his fellow Republicans, his insights would shine. But CNN, Fox News, CNBC, and Fox Business divided the GOP presidential field in two, excluding several of the less well-known candidates from their prime time debates. Those who finished near the bottom of national polls found themselves banished to an earlier, “happy hour” debate that garnered little exposure. Jindal, with little name recognition and less cash, hardly cracked one percent support in most national polls.

He plans to serve out the remainder of his term, then craft more wonkish plans for how to ensure the nation's safety and prosperity.

“One of the things I will do is go back to work at the think tank I started a few years ago” – America Next – “where I will be outlining a blueprint for making this the American century,” he said in a statement after leaving the race. “We must show the way forward on growing our economy and winning the war against terror, and especially defeating radical Islam.”

“We cannot settle for the Left's view of envy and division,” he told Fox News on Tuesday. “We have to be the party that says everyone in this country – no matter the circumstances of their birth or who their parents are – can succeed in America.”

Observers and his fellow candidates saluted his intellect and said he will have a bright future on the national stage, however he chooses to serve.

“I look forward to working with Governor Jindal as he will no doubt continue to have a shaping influence on American politics and the Republican Party,” said FRC's Perkins.

“His focus on substantive policy matters advanced the debate that our party must have on the issues most important to American voters,” he said. “He presented bold policy proposals that helped strengthen the ideas put forth in this primary to prepare our eventual nominee for the general election.”

“Governor Jindal has served the people of Louisiana with distinction,” he said. “I have no doubt that he will play an important role in helping to elect the next President of the United States, and beyond.”

The end of his presidential run lacked the typical frenzy of campaign operatives casting blame at one another for his loss. And Jindal was happy his lean campaign did not run up a dime of debt.

Gov. Jindal is the third candidate to drop out of the race, following former Texas Gov. Rick Perry and sitting Wisconsin Gov. Scott Walker. There are 14 Republican presidential candidates still in the race.

He was not yet ready to make an endorsement saying, “I don't think the people care” whom he supports.

His daughters, he said, are taking his exit in stride. “Their biggest question is still whether they can get a dog,” he said.

Judge blocks Louisiana Planned Parenthood defunding: Bobby Jindal vows not to give up

Walker, Jindal back Kentucky clerk on marriage licenses: ‘The Constitution is very clear’

Jindal: Planned Parenthood protesters were ‘too scared to watch’ undercover videos outside mansion