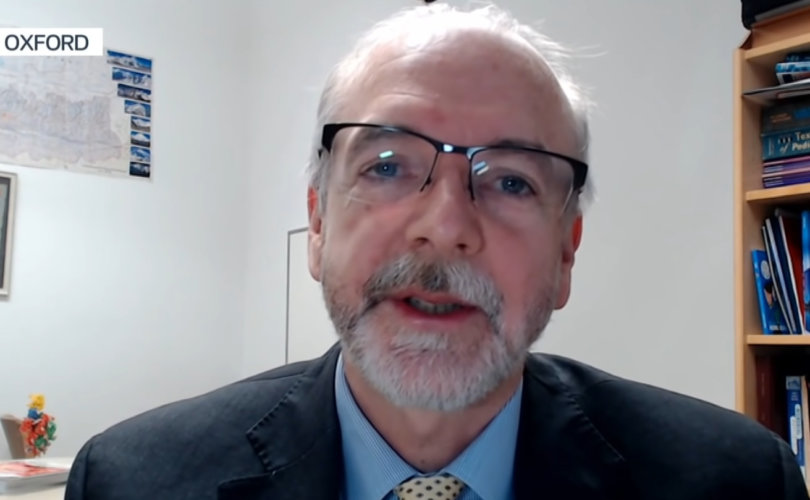 (LifeSiteNews) — The man behind the Oxford/AstraZeneca COVID-19 jab has said that proposals to offer booster shots twice a year are “not sustainable” and warned that supplying anything beyond a third dose of the jabs should be halted until evidence of their necessity comes to light.

During an interview with The Telegraph Monday, Professor Sir Andrew Pollard, director of the Oxford Vaccine Group and chair of Britain’s Joint Committee on Vaccination and Immunisation (JCVI), said that the COVID shot rollout should be reined in to “target the vulnerable” rather than giving endless boosters to the entire population.

In addition, the prominent scientist said that the omicron variant demonstrates that there is no need to implement harsh lockdown measures again, explaining that “at some point, society has to open up.” He added that “[w]hen we do open, there will be a period with a bump in infections, which is why winter is probably not the best time. But that’s a decision for the policy makers, not the scientists.”

With data from the U.K. Health Security Agency showing that immunity from the third doses wanes after around ten weeks, the JCVI is expected to consider the need for a fourth round of the shots.

However, Pollard, who chairs the committee, argued that society cannot expect to completely eradicate infection and that introducing perpetual booster shots is not a viable option.

Despite being a strong supporter of the jabs and playing a key role in the development of AstraZeneca’s COVID shot, Pollard stressed that “we can’t vaccinate the planet every four to six months. It’s not sustainable or affordable.”

“[If] your goal is to stop all infections … that is wrong,” the scientist added, emphasizing that when it comes to the virus “the worst is absolutely behind us.” He noted that “more strong evidence is needed” before following suit with places like Israel, where a fourth booster dose has been authorized for use.

Given Pollard’s role in developing the AstraZeneca shot for COVID-19, he is not involved in JCVI decisions regarding the novel coronavirus.

The Oxford-developed jab has received 240,065 reports from individuals experiencing some 850,893 separate adverse events, representing over 58 percent of all such reports in the U.K. following a COVID shot.

In March, concerns were raised about the development of dangerous blood clots following reception of the AstraZeneca shot, including deep vein thromboses (DVT) and thrombocytopenia (low platelet counts). So worrisome was the problem that nine countries temporarily pulled support for the shot at the time.

To date, 1,271 DVTs and 1,142 thrombocytopenias have been reported to the U.K.’s Yellow Card reporting system after taking AstraZeneca’s COVID jab.

Despite the worldwide push of the COVID shots as a measure to tackle transmission of the virus, trials have never produced evidence that the jabs stop infection or transmission. They do not even claim to reduce hospitalization, but the measurement of success is in preventing severe symptoms of COVID-19 disease. Moreover, there is strong evidence that the “vaccinated” are just as likely to carry and transmit the virus as the unvaccinated.