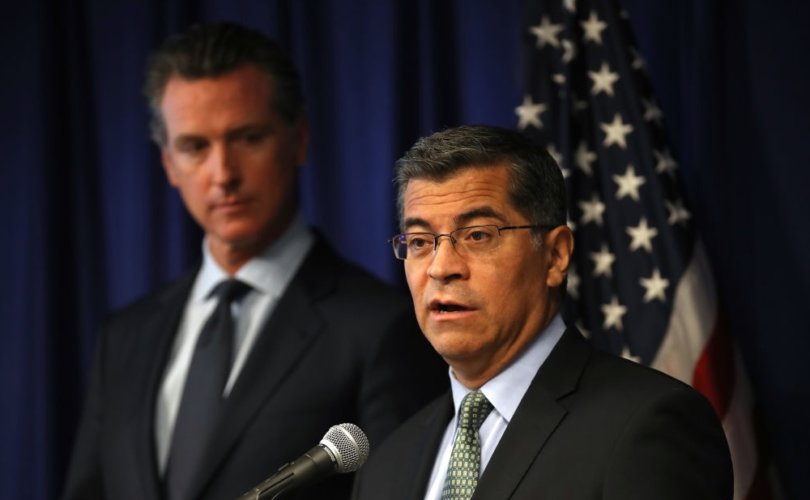 WASHINGTON, DC, February 23, 2021 (LifeSiteNews) — Pro-life and pro-freedom advocates are calling for the U.S. Senate to reject California Attorney General Xavier Becerra, a radical advocate of abortion and euthanasia, as the new leader of the Department of Health and Human Services (HHS).

Confirmation hearings for Becerra are being held today in the U.S. Senate.

According to moral theologian and attorney Kenneth Craycraft, during Beccerra’s tenure as a U.S. Representative from 1993 to 2017, “no member of Congress exceeded his enthusiasm for abortion for any or no reason up to, and even during, the birth of a child.”

Pro-life Oklahoma Senator James Lankford (R) explained that in addition to being “one of the country's most ardent advocates for abortion,” Becerra “has no health care experience and has directly advocated for the violation of federal conscience protection laws, including supporting legislation that would force religious employers like Hobby Lobby to violate their conscience and cover the morning-after pill.”

Becerra exercised the same aggression against the Little Sister of the Poor. As Kristin Hawkins, president of Students for Life of America, described, “the Sisters fought all the way to the Supreme Court twice to follow their consciences” in refusing to subsidize contraceptives and abortifacient chemicals in their health plans “with Becerra suing to end their religious exemption.”

Roger Severino, who served as the Director of the Office for Civil Rights at HHS during the Trump administration, has said that Becerra’s confirmation would be “an astounding conflict of interest.”

“Becerra is dangerously unqualified to lead HHS during a national pandemic,” said Severino, who now runs the HHS Accountability Initiative at the Ethics and Public Policy Center. “He has no public health experience and wants to impose California’s COVID-19 failures and abortion extremism on the rest of the nation. When I was head of Civil Rights at HHS, I twice held Becerra in violation of laws protecting conscience in health care resulting in a $200 million disallowance of HHS funds to California. For Becerra to head the very agency that investigated him and found he broke the law would be an astounding conflict of interest.”

Due to these dangers and more, 75 legislators signed a letter to President Joe Biden requesting that he withdraw Becerra’s nomination. Citing the former congressman’s “ardent support for abortion until the moment of birth,” which was demonstrated by his opposition to “the 2003 partial-birth abortion ban,” and his cosponsoring of legislation that would force employers to violate their sincerely held religious beliefs. The signatories also object to his “lack of experience” and his enthusiastic support for “eliminating the private health insurance market for 160 million Americans, only to replace it with a government takeover branded as Medicare-for-all.”

As Hawkins explained in a USA Today opinion piece, “Becerra filed 15 felony charges” against pro-life journalists David Daleiden and Sandra Merritt “who uncovered the fact that Planned Parenthood had a side business in selling aborted infant body parts. Even the Los Angeles Times called the heavy-handed prosecution ‘a disturbing overreach.’”

For these reasons the signatories called on Biden to “put our country over radical partisan objectives by withdrawing Mr. Becerra’s nomination for HHS Secretary.”

During this morning’s hearing Senator Mitt Romney took Becerra to task over his radical position on abortion. Even with the general disagreement of Republicans and Democrats on the issue of abortion, Romney said “most people agree that partial-birth abortion is awful. You voted against a ban on partial birth abortion. Why?”

.@SenatorRomney: You voted against a ban on partial-birth abortion. Why?

Xavier Becerra: I think we can find some common ground…

Romeny: I think we can reach common ground on many issues, but on partial-birth abortion, it sounds like we're not going to.#StopBecerra pic.twitter.com/6cQmUq6Eil

Following a dodge answer from Becerra appealing to a desire to find “some common ground,” Romney concluded, “I think we can reach common ground on many issues, but on partial-birth abortion, it sounds like we're not going to.”

In response to Becerra’s nomination, LifeSite has initiated a Voter Voice campaign where with a few clicks you can contact your U.S. Senators and ask that they oppose the nomination of Becerra as America’s next HHS Secretary.

The system also easily facilitates notifications on Twitter and provides for the option of calling your senator as well.

Please click here and take a few minutes to notify your senators of your opposition to this eminently unqualified nominee to head HHS.