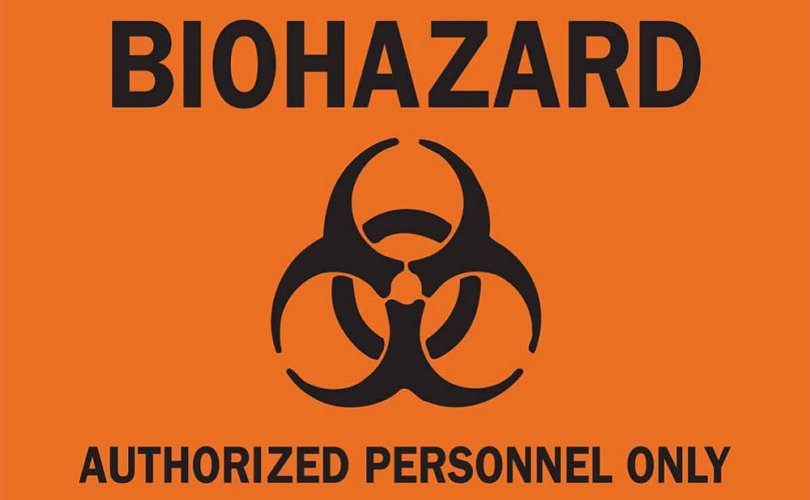 The new company, Bio-Haz Solutions, Inc., based in Nesquehoning, Pennsylvania, was first seen at ACO in early July making a pick-up of four large and apparently very heavy boxes.

ACO, which is owned and operated by the notorious late-term abortionist LeRoy Carhart of Nebraska, is one of a handful of abortion facilities in the U.S. that openly abort babies through all nine months of pregnancy.

In fact, Carhart specializes in the extremely expensive multi-day abortions on nearly full-term babies and has been known to abort as many as a dozen such babies per week.

The driver of a Bio-Haz Solutions van was seen going into ACO with flat cardboard boxes and empty red plastic biohazard bags. He came out with two boxes at a time that were so full of aborted baby remains that the cardboard bowed out and crunched at the bottom.

“It was appalling to see those pictures of boxes that must have been full of the bodies and pregnancy tissue of very large aborted babies. Apparently, there had not been a pick up there for at least two weeks, so there could have been as many as two dozen babies weighing up to five pounds each in those boxes,” said Operation Rescue President Troy Newman. “That really brings home the barbarity of late-term abortions. It's really the stuff of nightmares.”

Bio-Haz Solutions is the latest company to attempt to profit from the disposal of aborted babies at Carhart's Bethesda abortion facility.

“Now, it's time to call on pro-life supporters to again reach out to this new company and ask them to stop working for Carhart,” said Newman. “Together, our voices have the power to change hearts and save lives.”

This time, Mark Harrington of Created Equal has joined with Operation Rescue in calling for Bio-Haz Solutions to stop servicing Carhart's late-term abortion business. Harrington calls medical waste disposal companies the “weak link” for abortion facilities and has been conducting a successful national campaign that resulted in the nationally-known company waste disposal company, Stericycle, (among others) to stop servicing abortion clinics, leaving many scrambling to find new disposal services.

“We are happy to team up with Created Equal to call for Bio-Haz Solutions to stop enabling the horrific abortions that are taking place in Bethesda,” said Newman. “Without a disposal service, very soon Carhart just won't be able to continue operating, and that would certainly save lives.”

Please contact Bio-Haz Solutions owner David Henritzy and politely ask him to cancel his contract with LeRoy Carhart and AbortionClinics.org.