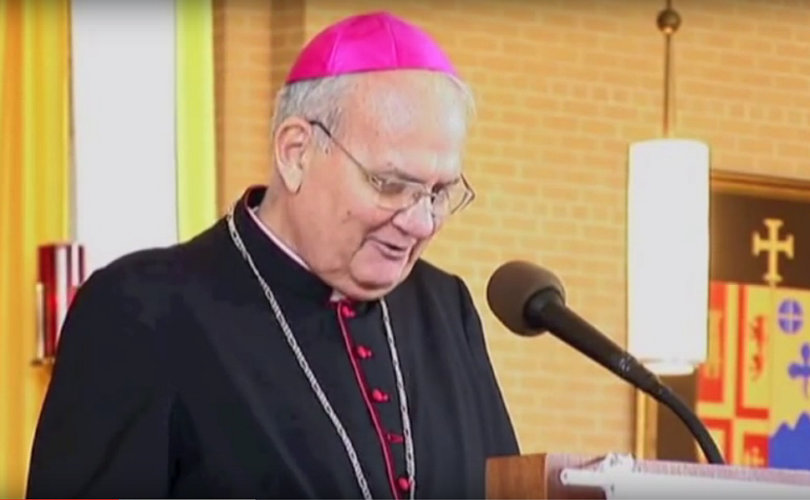 But in what may be the most outrageous case of speciously projecting fault, the Catholic bishop of St. Petersburg, Florida, distorted the very faith he was ordained to uphold.

“Sadly it is religion, including our own, which targets, mostly verbally, and also often breeds contempt for gays, lesbians and transgender people,” Bishop Robert Lynch wrote in a June 13 blog post. “Attacks today on LGBT men and women often plant the seed of contempt, then hatred, which can ultimately lead to violence.”

The Catholic Church teaches that individuals experiencing homosexual tendencies “must be accepted with respect, compassion, and sensitivity,” and that, “Every sign of unjust discrimination in their regard should be avoided.” It further teaches that homosexual persons are called to chastity, and that homosexual acts are “acts of grave depravity,” as well as, “intrinsically disordered.”

“They are contrary to the natural law,” the Catechism states. “They close the sexual act to the gift of life. They do not proceed from a genuine affective and sexual complementarity. Under no circumstances can they be approved.”

Bishop Lynch further misconstrued the Constitutional right for U.S. citizens to bear arms, and implied that to be pro-life, one must actively support gun control measures.

“It is long past time to ban the sale of all assault weapons whose use should be available only to the armed forces,” said Bishop Lynch. “If one is truly pro-life, then embrace this issue also and work for the elimination of sales to those who would turn them on innocents.”

Bishop Lynch has a troubling history of apparent support for homosexuality and hostility toward those who support the pro-life cause.

Despite religious liberty threats across the nation against those whose faith convictions aren’t compatible with homosexual “marriage,” the bishop said in a January 2015 Tampa Bay Times column that homosexual relationships pose no risk to the Church, and in fact can be godly and elevate society and the Church.

“I do not wish to lend our voice to notions which might suggest that same-sex couples are a threat incapable of sharing relationships marked by love and holiness and, thus, incapable of contributing to the edification of both the Church and the wider society,” he wrote.

The former chairman of Catholic Relief Services’ board of trustees from 2001 to 2007, Bishop Lynch besmirched the character and motivation of pro-life entities in 2013 for their having exposed serious concerns over the US bishops’ contentious relief agency, accusing them of “attacking” CRS as a “money raising scheme.”

Perhaps the most widely publicized instance of Bishop Lynch’s animosity toward support for life was his refusal to act in defense of Terri Schiavo’s life as the Florida woman was starved and dehydrated to death by court order at the hands of her husband Michael Schiavo within the St. Petersburg diocese, even as the Vatican appealed to the presiding judge to spare her from the enforced euthanasia.

In the wake of Orlando: a love-shaped apologetic