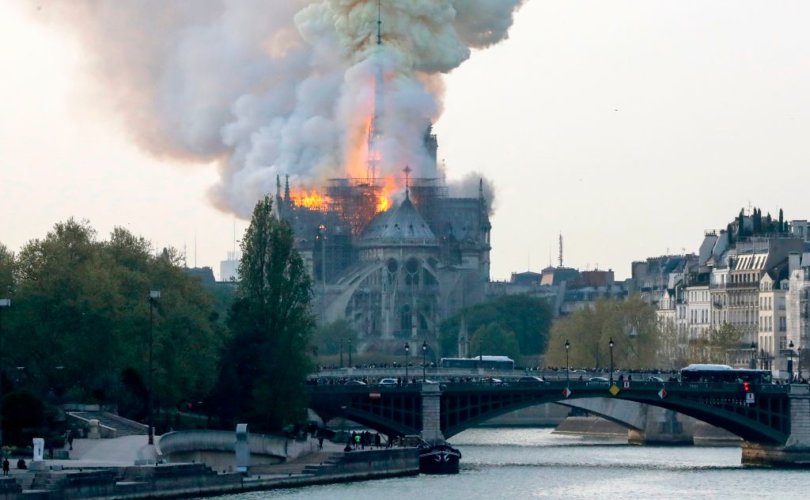 TOPSHOT-FRANCE-FIRE-NOTRE-DAME TOPSHOT - Smokes ascends as flames rise during a fire at the landmark Notre-Dame Cathedral in central Paris on April 15, 2019 afternoon, potentially involving renovation works being carried out at the site, the fire service FRANCOIS GUILLOT/AFP/Getty Images

PARIS, April 15, 2019 (LifeSiteNews) – Paris authorities are battling a fire in the city’s Notre Dame cathedral that broke out Monday, producing massive plumes of smoke billowing from the historic Catholic site.

Authorities have cleared the area surrounding the cathedral as they battle flames “leap[ing] out besides its two bell towers,” NBC News reports. Paris Mayor Anne Hidalgo has requested that passersby steer clear of the vicinity until further notice.

Here's a live feed from Notre Dame of the cathedral on fire, from an eyewitness in Paris: https://t.co/D1h7kybrPq doesn't look good!

A cause for the fire has not yet been confirmed, but local media reports that police are currently treating it as an accident, potentially related to renovations currently underway. “Notre-Dame was in the midst of renovations, with some sections under scaffolding, while bronze statues were removed last week for works,” NBC reports.

Fire at Paris’ Notre Dame cathedral was started by accident and is related to ongoing work, according to France 2, citing police. Either way it is terrible and a hideous blow to the symbolic heart of the city

To be clear — no evidence the fire at Notre Dame was set on purpose as some sort of attack. However, it is the case that several Catholic churches have been attacked, including set on fire, across France recent months https://t.co/P79XlaBYWu

“So horrible to watch the massive fire at Notre Dame Cathedral in Paris,” U.S. President Donald Trump said in response to the news. “Perhaps flying water tankers could be used to put it out. Must act quickly!”

So horrible to watch the massive fire at Notre Dame Cathedral in Paris. Perhaps flying water tankers could be used to put it out. Must act quickly!

While details are currently scarce and there’s no known evidence the fire was intentional, it comes two days after 22-year-old Ines Madani was sentenced to eight years in prison for her involvement in a 2016 plot to detonate a car packed with gas canisters near the cathedral.

Across social media, users are highlighting and lamenting the artistry and architecture being lost with various photos:

always wanted to see it, but..

we should take more care in our history and heritage, to be honest #NotreDame pic.twitter.com/sE8Xta8NVT

LifeSiteNews will continue to update this breaking story as developments unfold.

“Notre Dame of Paris in flames. Emotion for a whole nation,” French president Emmanuel Macron declared. “Thoughts for all Catholics and for all French. Like all our countrymen, I'm sad tonight to see this part of us burn.” Interior Minister Christophe Castaner assured the public that an “exceptional force” has been deployed to combat the blaze.

UPDATE, 1:46 PM CST: Video from the scene captures the fall of the spire amid the flames and the anguished reaction of witnesses:

“Notre Dame is an iconic symbol of faith to people all over the world – and it is heartbreaking to see a house of God in flames,” U.S. Vice President Mike Pence responded. “Our thoughts and prayers are with the firefighters on the scene and all the people of Paris.”

UPDATE, 2:47 PM CST: “The horrific fire that is engulfing the Cathedral of Notre-Dame de Paris is shocking and saddens us all, for this particular cathedral is not only a majestic Church, it is also a world treasure,” Cardinal Daniel DiNardo, president of the U.S. Conference of Catholic Bishops, said in a statement. “Noble in architecture and art, it has long been a symbol of the transcendent human spirit as well as our longing for God.

“Our hearts go out to the Archbishop and the people of Paris, and we pray for all the people of France, entrusting all to the prayers and intercession of the Mother of God, especially the firefighters battling the fire,” he continued. “We are a people of hope and of the resurrection, and as devastating as this fire is, I know that the faith and love embodied by this magnificent Cathedral will grow stronger in the hearts of all Christians.”

UPDATE, 3:06 PM CST: “The Holy See has learned with shock and sadness the news of the terrible fire that has devastated the Cathedral of Notre Dame de Paris, symbol of Christianity, in France and in the world,” the Vatican said in a statement. “We express our closeness to the French Catholic and to the people of Paris. We pray for the fire fighters and for all those who are doing everything possible to face this dramatic situation.”

UPDATE, 4:18 PM CST: While two-thirds of the cathedral's roof have been destroyed, French Interior Ministry official Laurent Nunez says that “both towers of the cathedral are safe” and work is ongoing to preserve the structure's remaining art, CNN reports. One firefighter has been seriously injured so far.