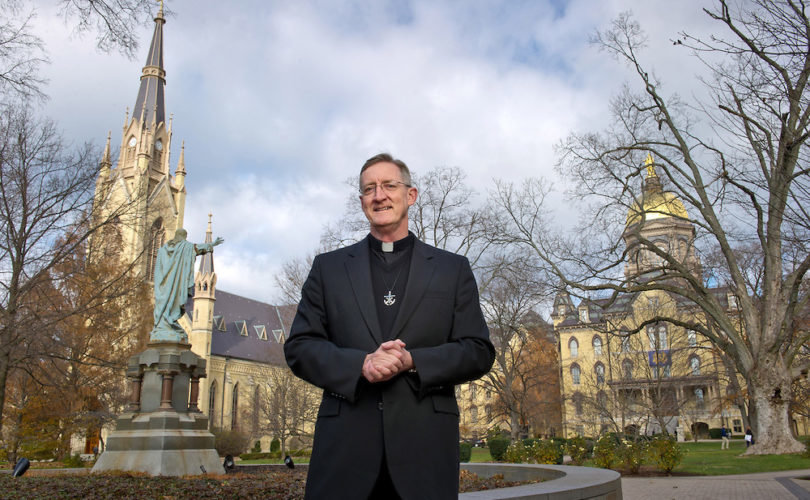 NOTRE DAME, Indiana, November 24, 2015 (LifeSiteNews) — A prominent priest in the religious order that founded Notre Dame University has been compelled to back out of a project aiming to provide Notre Dame students information to help ensure they get an authentic Catholic education.

Holy Cross Father Bill Miscamble, longtime Notre Dame history professor and prior History Department chair, has disassociated with a website created for him to help students and parents identify faculty and courses that best foster a Catholic education at the University.

The University of Notre Dame was founded by a priest from the Society of the Congregation of Holy Cross, whose Indiana Province shares in governance of the University.

Two days after NDCatholic.com went live, Father Miscamble had to make the announcement, “I regret that I can say only that I am required to end my involvement with the NDCatholic site and am not at liberty to say why.”

LifeSiteNews inquired with Father Miscamble on the situation, and he responded, “I am very sorry, but I cannot comment on this matter. God bless you.”

LifeSiteNews inquired as well with Notre Dame and did not hear back by press time.

NDCatholic.com was launched November 9 by Sycamore Trust, a group of Notre Dame alumni who formed in 2006 over concern for Notre Dame’s weakening Catholic identity.

Sycamore Trust “was born of intense concern over the loss by Notre Dame of its historic claim to a robust Catholic identity,” according to its website.

The school, long regarded as the nation’s premiere Catholic university, has been the center of troubles over its Catholic identity for decades. In recent years, it has come under strong criticism for its decision to award President Obama an honorary doctorate in 2009, and over its handling of the HHS contraception mandate. It is also frequently criticized for various events and speakers hosted on campus in contradiction of Catholic teaching, and the actions of some faculty.

“The University’s honoring of President Obama in opposition to the policy of the United States Conference of Catholic Bishops and in defiance of its own bishop, together with such other unsettling events as The Vagina Monologues and The Queer Film Festival, have raised serious doubt whether Notre Dame retains a vibrant Catholic identity,” the Sycamore Trust's website states. “The dramatic shrinking of the Catholic faculty, measured against the school’s Mission Statement, confirms that it does not.”

The NDCatholic site launched November 9, “for students who are seeking an authentic Catholic education at Notre Dame — one that will allow them to grasp the complementary nature of faith and reason, to develop a deep understanding of and love for the truth, and to gain a clear appreciation of the Catholic moral and social vision.”

“For a Catholic institution to live up fully to its promise, it must have devoted teachers and scholars who aim to stir in their students a hunger for the truth,” Father Miscamble is quoted as saying with the announcement of NDCatholic.com.

LifeSiteNews did not hear back from Sycamore Trust with comment prior to press time.

The group stresses on its website that it does not take issue with non-Catholic faculty at a Catholic university, and in fact, Father Miscamble's list of 100 or so recommended teachers is not limited to Catholics. Rather, “It is a question of balance, and unhappily the necessary balance in favor of Catholic faculty has been lost over the years at Notre Dame in its drive for secular acclaim.”

The NDCatholic website had been enthusiastically welcomed and commended, Sycamore Trust states in its announcement of Father Miscamble’s being removed from involvement in the site. NDCatholic.com apparently crashed on its first day due to heavy demand.

The site had opened with a video of Father Miscamble explaining its content, along with his longer written introduction, both of which the priest later requested Sycamore Trust remove because of his being directed to disassociate with the site.

Sycamore Trust Chairman Bill Dempsey says Father Miscamble told him he must disassociate himself from the website the day after it launched.

Dempsey emailed Father Miscamble the next day, telling him he was surprised and deeply disappointed, and also that he was concerned Notre Dame would look bad in the matter without a solid explanation for the decision. Dempsey asked Father Miscamble what reason should be given.

This prompted Father Miscamble’s statement that he could only say he’d been required to end his involvement with the NDCatholic site and was not at liberty to say why.

Father Miscamble, a former seminary rector who is also an author, has been a permanent faculty member of Notre Dame since 1988, also completing an MA, Ph.D. and Master of Divinity at the University prior to joining the faculty.

He is also known for his pro-life support, founding Faculty for Life, and for speaking out about concerns over Notre Dame’s Catholic identity. Father Miscamble was among many who criticized the University’s scandalous 2009 honoring of Barack Obama in light of Obama’s rabid pro-abortion stance and policies.

In 2013 he released his book For Notre Dame – Battling for the Heart and Soul of a Catholic University.

“Where I see a kind of two faces is Notre Dame is a school that wants to be the preeminent Catholic university to a variety of constituencies, yet we face all the temptations to conform to all the universities with which we want to compete, and that is done often at a cost to our Catholicity,” he said at the time. “I say that we worship at the golden calf of U.S. News and World Report’s rankings, with all that implies.”

“There is a real struggle going on for the future of Notre Dame, a struggle for what kind of place this will be,” he said. “Notre Dame needs to be held accountable.”

Despite Father Miscamble being made to pull out of participating in the website, the Sycamore Trust is moving forward with NDCatholic.com.

“For our part, we deeply regret this development, which we think a disservice to students and parents and, indeed, to the university,” the group states. “Even though Father Miscamble must withdraw, we will build upon what he has given us in continuing this project.”