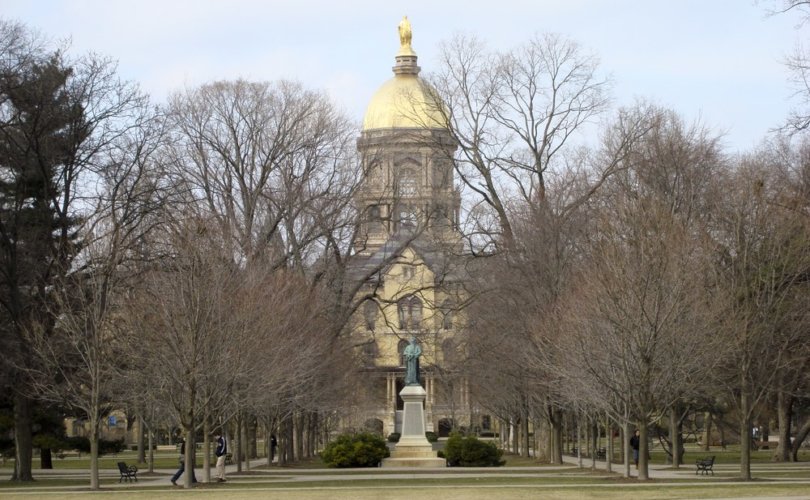 “The situation is one that demands discernment—something to which Pope Francis has called the Church in his various writings and addresses,” wrote Jenkins in a February 7 letter to faculty and staff about the decision.

“Discernment, which has a long history in the Catholic spiritual tradition, is, of course, a process of weighing thoughtfully considerations for and against various courses of action. Yet it also demands prayerful attention to God’s guidance through the prompting of the Holy Spirit,” he added.

The university had announced in November that contraception would be available to those covered on its insurance plans through a third-party insurance administrator. The decision dismayed alumni, staff and others concerned for the university’s Catholic identity, and also came as a surprise because Notre Dame had been among a number of Catholic institutions to sue over the HHS Contraception Mandate in Obamacare.

Jenkins stated in his letter that third-party insurance also included the “provision of abortion-inducing drugs” which are “far more gravely objectionable in Catholic teaching.” Because of this, the university decided to “stop the government-funded provision of the range of drugs and services through our third party administrator.”

“Instead, the University will provide coverage in the University’s own insurance plans for simple contraceptives (i.e., drugs designed to prevent conception),” wrote Jenkins

The policy is scheduled to be enacted starting June 1, 2018.

The Catholic Church condemns contraception because it separates the unitive and procreative purposes of the marital act. Chemical contraception also has countless associated health risks. Further, when regular oral contraception fails to prevent conception, some experts say it can actually cause an abortion.

“Now the University is to be sole funder and proprietor of a contraception giveaway, with only the logistics of it delegated by Notre Dame to its plan administrators. What it solemnly declared for years to be morally impossible is, suddenly, the substance of Notre Dame’s free choice,” he wrote.

Bradley said Notre Dame “has betrayed the Catholic faith,” adding that “Fr. Jenkins and all others involved in making this fateful, gravely wrong choice should be rebuked.”

The law professor said that the decision will cause incalculable harm to “so many persons’ minds, bodies and souls.”

He warned that Fr. Jenkins justification for funding contraception, based on “respecting” those who have decided to use contraception despite Church teaching, “is not only mistaken, but catastrophic for the moral life.”

“Our moral duty to respect others’ choices does not have anything to do with giving them the means to do evil,” he wrote, adding that “one should not respect another’s specific immoral choice at all.”

“Everyone’s immoral choices should be regretted, and their repetition discouraged, and their occurrences criticized appropriately,” he wrote.

The university did not provide contraception coverage in its insurance plans before the 2012 mandate, Catholic News Agency reports, except when it was prescribed for a medical condition. The Catholic university only allowed contraceptive coverage for staff and students after first unsuccessfully contesting Obama's HHS ‘contraception’ Mandate. Then, in a surprise flip-flop, the university rejecting the offer of a religious exemption to the Mandate by the Trump government.

Alumni criticized the flip-flop, as did Cardinal Timothy Dolan, chair of the USCCB’s Committee on Pro-Life Activities. Part of the concern was also that Notre Dame’s participation in the lawsuit without the intention of taking advantage of the exemption was a misuse of the justice system.

Bradley criticized Jenken’s for wrapping the university's funding of contraception in the language of “discernment.”

“But the Holy Spirit is not a consequentialist. God does not want us to weigh up pros and cons of adhering to the moral truth. And the greatest respect we can show others is to bear faithful witness to that truth,” he wrote.