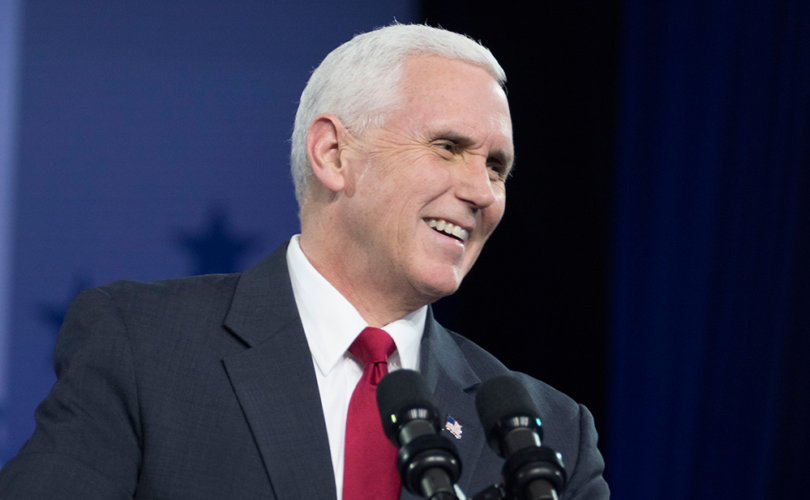 SOUTH BEND, Indiana, March 7, 2017 (LifeSiteNews) – In a break from tradition, Notre Dame will not host a sitting president as its commencement speaker this spring.

The university announced last week that Vice President Mike Pence, and not President Donald Trump, would be principal speaker for the May 21 address. Pence also will receive an honorary degree.

While Pence will be the first vice president to address the graduation, Notre Dame tradition is to invite U.S. presidents to give its commencement address during their first year in office.

Notre Dame’s president, who has been critical of Trump’s proposed moratorium on travel and refugees from several primarily Muslim countries, praised Pence’s “quiet earnestness” and other qualities, almost as though painting him in contrast to Trump.

“It is fitting that in the 175th year of our founding on Indiana soil that Notre Dame recognize a native son who served our state and now the nation with quiet earnestness, moral conviction and a dedication to the common good characteristic of true statesmen,” Holy Cross Father John Jenkins said in a statement.

University spokesman Paul Browne declined to confirm whether Trump was invited to this year’s graduation ceremony, The Washington Post reported, or if the president might be asked to visit Notre Dame at a later date.

Obama’s 2009 invite drew months of passionate criticism because of his support for abortion and homosexual “marriage” in conflict with Church teaching.

At the time, Father Jenkins disregarded the petitions of 367,000 concerned Catholics and others — among them 83 cardinals, bishops and archbishops and his local ordinary. And he ignored requests for “dialogue” from the 80-plus people arrested for peacefully demonstrating the unseemly Obama invitation on campus.

Father Jenkins persisted in dismissing the criticism, continually defending the decision to invite Obama, even after the commencement appearance.

“He is the president of the United States,” Father Jenkins said, “and there was a tradition of Notre Dame inviting presidents to be commencement speakers and receive honorary degrees, and we continue that tradition.”

The Notre Dame president had also said he would do it all over again.

“For all the controversy, I think it was a successful day,” he said.

However, the university president apparently had a different outlook regarding the prospect of maintaining Notre Dame tradition, the importance of not fearing controversies, and how some people might view an invitation to Trump.

After Trump’s November 2016 surprise election victory over Hillary Clinton, Father Jenkins told The Observer student newspaper in early December he was debating the question of commencement speaker selection. The possibility for controversy, it seemed, was an issue.

“I do think the elected leader of the nation should be listened to. And it would be good to have that person on the campus — whoever they are, whatever their views,” Father Jenkins said. “At the same time, the 2009 commencement was a bit of a political circus, and I think I’m conscious that that day is for graduates and their parents — and I don’t want to make the focus something else.”

“My concern a little bit is that, should the new president come, it may be even more of a circus,” he said.

Father Jenkins’s statement on the Pence invitation seemed to point to a contrast in demeanor between Pence and Trump.

“With his own brand of reserved dignity, Mike Pence instilled confidence on the state level then, and on the world stage now,” he said. “We are proud to welcome him to represent the new administration.”

Vice President Pence responded with characteristic grace to the invitation.

He said in a statement, “It is extraordinarily humbling to return to my home state and address the graduates of Notre Dame.”

President Trump’s strong immigration stance is considered controversial, even bigoted, by the left. At the same time, his efforts have remained popular among supporters for endeavoring to protect American citizens.

And while Trump’s immigration stance has been criticized by some of the nation’s bishops, Trump carried the Catholic vote in the election.

In the December interview with The Observer about the quandary over choosing a graduation speaker, Father Jenkins said it was important to wait and see what policies the Trump administration would institute after his inauguration.

Six days into office, Trump ordered the Department of Homeland Security to begin building the wall on the southern U.S. border with Mexico, which he promised during the election. The order also provided for 5,000 additional border protection officers.

That order has been tied up in court since the 9th Circuit Court of Appeals blocked it last month. Trump signed a new order Monday revoking and replacing the first order. The new directive drops Iraq from the list of countries from which travel is temporarily banned and goes into effect March 16.

Notre Dame has been the unfortunate site of breaches in Catholic identity for decades.

Since the 2009 speech by Obama, recent examples include an appearance last year by Supreme Court Justice Ruth Bader Ginsberg and the university honoring then-Vice President Joe Biden with its Laetare Medal to an American Catholic in recognition of outstanding service to the Church and society.

Both Biden and Ginsberg are fervent supporters of abortion and gay “marriage.”

A well-known Notre Dame priest-professor was also compelled in 2015 to back out of an initiative to provide students with information to help ensure they get an authentic Catholic education at the university.

The university also officially allowed a student group for homosexuals, which Father Jenkins termed “a big step forward,” but denied recognition to a marriage advocacy group.