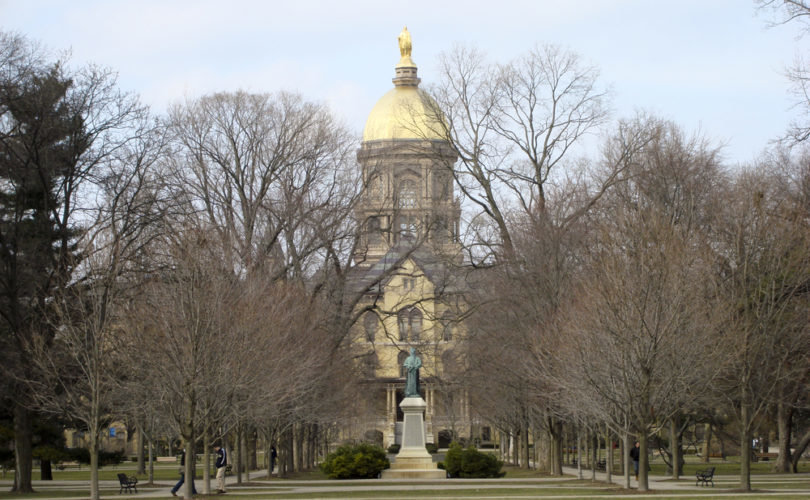 February 5, 2015 (CardinalNewmanSociety.org) — Gay and Lesbian Alumni of Notre Dame & St. Mary’s (GALA)—an unofficial alumni group—recently announced an “LGBTQ Scholarship” for students and is asking them about their sexual orientation and experience with activism.  The scholarship comes as no surprise for Notre Dame alumnus William Dempsey, who observed that GALA opposes Catholic teaching and has been working to increase its presence at the University.

The scholarship announcement was publicized on GALA’s website and reportedly given advertisement space in the student newspaper, The Observer. The two recipients of the new scholarship will receive $2,500 from GALA, but must “identify within the LGBTQ community,” according to the scholarship application which can be downloaded from the GALA website.

GALA is not officially recognized by the Notre Dame Alumni Association, however it has continued to pursue official recognition and aimed to submit a formal application to the Alumni Association last March, according to its website.

“GALA’s drive to increase its influence with the administration, faculty, and students is intense and long standing,” said Dempsey, chair of the group Sycamore Trust, in an interview with The Cardinal Newman Society. “(I)t has succeeded in two of its major goals: the recognition of a gay student organization and the award of spousal benefits (e.g., health insurance and student housing) to same-sex ‘married’ faculty and students.”

“Its success in securing official recognition and inclusion of sexual orientation in the school’s non-discrimination policy now seems likely notwithstanding its hostility to the Church’s teaching that homosexual sex is gravely immoral and its opposition to same-sex ‘marriage,’” Dempsey explained.

Dempsey also mentioned a number of events sponsored by GALA that took place at Notre Dame over the past several years. These included the sponsoring of speaker Eugene Robinson, an openly homosexual Episcopal bishop who has publicly opposed Church teaching on marriage. In an article for The Washington Post, Robinson denounced Catholic bishops for standing against same-sex marriage.

“GALA makes no secret of its dedication to undermining the Church’s teaching,” warned Dempsey. “(I)ts awardees have included such notorious opponents of Church teaching as John J. McNeil and Sister Jeanne Gramick, the former having been expelled from the Jesuits and the latter disciplined.”

“The school ought not sanction the promotion of this venture by an advertisement in the official student newspaper any more than it would one by a pro-choice ND alumni association,” Dempsey contended. “Nor should it bless GALA with official recognition any more than it would an alumni group dedicated to undermining some other important Church teaching on abortion, euthanasia, or support of the poor.”