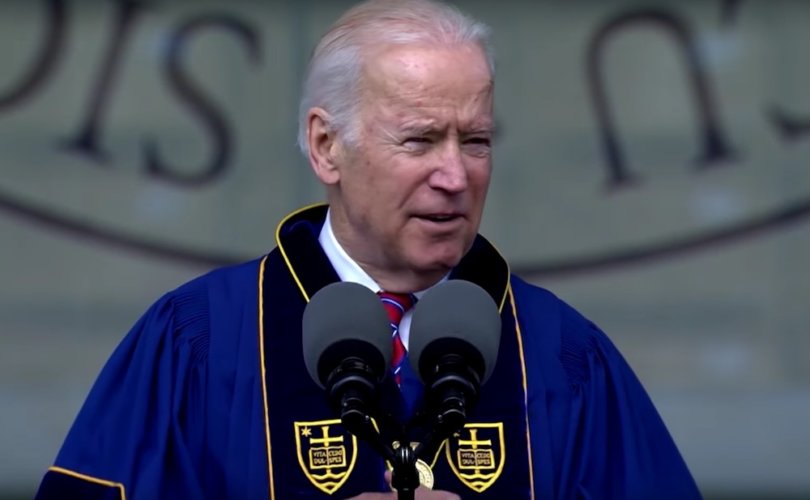 Notre Dame awarded Biden, along with former Speaker of the House John Boehner, its Laetare Medal, which is given for outstanding service to the Church and society.  Notre Dame students and faculty as well as a number of prominent Catholics voiced their objection to the large Catholic university honoring a politician who has used his power to repeatedly and loudly promote same-sex “marriage,” abortion, embryonic stem cell research, and other practices the Catholic Church considers intrinsically evil.

A statement read before Biden and Boehner received their awards said that they were being recognized for their public service and work for the common good.  In their commencement speeches, Biden and Boehner criticized the current negative nature of American politics.

Cardinal Donald Wuerl, the archbishop of Washington, offered Notre Dame’s Baccalaureate Mass on Saturday but didn’t attend commencement.  The Archdiocese of Washington previously told LifeSiteNews that they didn’t comment on matters within other dioceses and referred to the local bishop’s statement rebuking Notre Dame.

Phil Lawler, a well-known Catholic journalist, had called on Wuerl to pull out of the weekend’s activities over the Biden scandal.

“The silence from the [Church] hierarchy,” on this scandal “is deafening,” he wrote.

During his homily, Wuerl told students, “Your education here at Notre Dame unfolded in the context of an institution that recognizes and cherishes the existence of truth, the value of truth, the determinant role of truth in our lives—personally, collectively, and societally.”

Biden is “a man who knows better,” Scheidler said, noting that the vice president points to Church teaching as guiding him on matters of social justice and even has claimed to agree with Church teaching on the sanctity of life.

The local bishop, Bishop Kevin Rhoades of the Diocese of Fort Wayne-South Bend, rebuked Notre Dame for its decision to honor Biden, noting that the honor could “provoke scandal” by giving the impression “that one can be ‘a good Catholic’ while also supporting or advocating for positions that contradict our fundamental moral and social principles and teachings.”