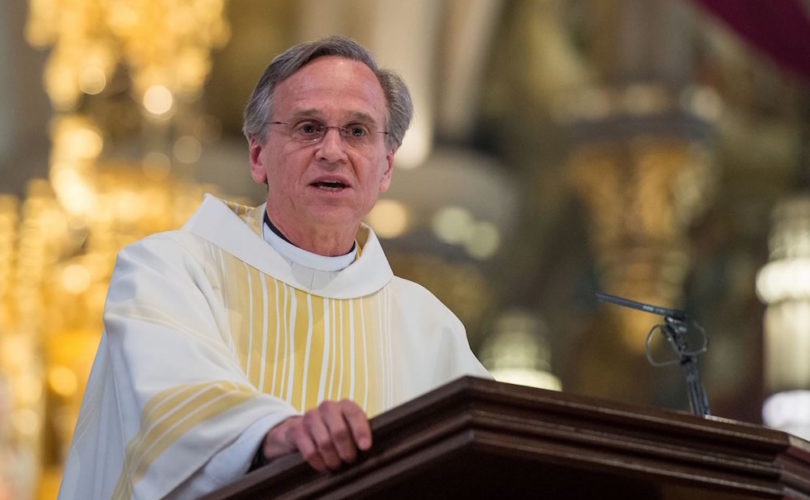 SOUTH BEND, Indiana, January 9, 2018 (LifeSiteNews) – It would be “hypocritical” for Notre Dame University’s president to attend the March for Life given his role in allowing abortifacient birth-control coverage through insurance to students and staff, concerned alumni are saying.

A Notre Dame alumni association, the Sycamore Trust, was disappointed when the university, under the presidency of Father John Jenkins, CSC, bowed to Obama’s HHS ‘contraception’ mandate which enjoined employers to provide their employees with health coverage that included “services” such as contraceptives and sterilization. The group expressed grave concern when the university did not except the new faith-based exemption offered by the Trump administration.

Father Jenkins has participated in the March for Life in the Capitol since 2010, but critics say that this year it would be better if he stayed away.

“It is hard to imagine him delivering a pro-life homily after having turned the university into an agent for the distribution of abortifacients and contraceptives to students and employees,” he said.

Notre Dame did not respond to LifeSiteNews’ request for comment before press time.

Manufactures of common hormonal contraceptives, such as the IUD, have made clear the abortive effects of contraception. According to the manufacturer of Mirena, the IUD makes a woman’s body hostile to new life in three ways: It thickens the woman’s cervical mucus to prevent sperm from traveling to an egg; it prevents sperm from fertilizing an egg; and if a sperm and egg do unite, the IUD thins the lining of the uterus, making it impossible for the newly conceived human being to implant on the uterine wall.

Notre Dame alumnus Brian Simboli has argued that even if there is a medical dispute about whether contraceptives act as abortifacients, “morality requires that one should treat them as having these effects.”

“The pro-life community, on balance, has hardly yet addressed the serious implications of this principle,” he wrote.

Simboli told LifeSiteNews that Notre Dame’s failure to stand up against the HHS mandate was a tragedy.

“It is a tragedy that a university with an about 12 billion dollar endowment, and so much potential to help the pro-life cause, did not stand up to the HHS mandate about abortifacients,” he said. “There is no way the Obama administration would have risked the political capital had Notre Dame done so at the get-go.”

Simboli blames Father Jenkins for Notre Dame’s refusal of the exemption from the mandate offered by the Trump administration. Notre Dame chose instead to let the university’s health plan contractors continue to provide free abortifacients and contraceptives to its students and employees.

“One can only wonder, in light of recent events at Notre Dame, precisely what Fr. Jenkins meant when he says that “I am one in whose heart ‘dogma beats loudly,” said Simboli.

Simboli was referring to a letter Jenkins wrote to Senator Diane Feinstein in response to her remark to Notre Dame professor Amy Coney Barrett, during her judicial confirmation hearing, that “dogma lives loudly in you.”  The remark was interpreted by many Catholics as an anti-Catholic slur.

“I am one in whose heart ‘dogma lives loudly,’ as it has for centuries in the lives of many Americans, some of whom have given their lives in service to this nation,” Jenkins wrote.

Under Jenkins’ tenure, however, Notre Dame has permitted various offenses against Catholic teaching. In 2006, Notre Dame permitted both the performance of  The Vagina Monologues, an obscene play in which one character exults in her statutory rape by an older woman. That same year, it allowed a film festival showcasing same-sex sexual desire. Then, in 2009, Notre Dame invited abortion extremist and then-U.S.-President Barack Obama to speak at a commencement ceremony where he was awarded a Doctorate of Laws.

“He is the president of the United States,” Father Jenkins said at the time, “and there was a tradition of Notre Dame inviting presidents to be commencement speakers and receive honorary degrees, and we continue that tradition.”

But Jenkins broke that tradition this year when he neglected to invite President Trump to Notre Dame’s commencement ceremony, choosing instead to honor Vice-President Mike Pence.

In welcoming Obama to Notre Dame, Jenkins disregarded the petitions of 367,000 individuals, including 83 cardinals, bishops, archbishops and his own local ordinary, to rescind the invitation. He also ignored requests for “dialogue” from the 88 protesters arrested for “criminal trespass” as they peacefully protested Obama’s presence on campus.

The 2018 March for Life, the largest pro-life rally in the world, will take place in Washington D.C. on January 19.

Editor's note: In an earlier version of this report, LifeSiteNews referred to Fr. Jenkins as “William,” whereas his name is “John.”