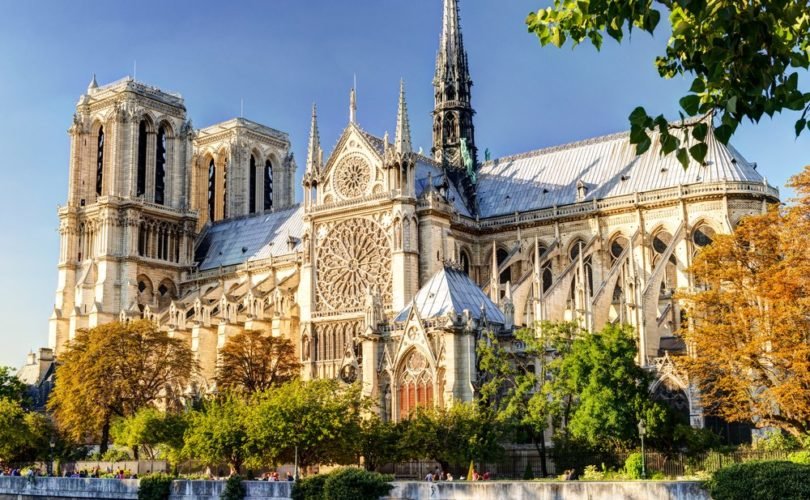 April 19, 2019, LifeSiteNews — Less than 72 hours after Notre Dame de Paris was substantially destroyed by fire, the hope and encouragement elicited by donation pledges totaling more than one billion Euros for its reconstruction have been tempered by concerns that the magnificent gothic Cathedral may be subject to modernist architectural interpretation, reflecting the new ethnic and religious diversity of France rather than its Catholic heritage.

Worries about the fate of the beloved Cathedral were heightened when the French government announced a design competition for a spire to replace the one that burned and collapsed into the heart of the venerable cruciform Church.

“The damage wrought by the Notre Dame fire has also raised important questions about the cathedral’s symbolic significance in an increasingly divided France, and how to rebuild (or which version of the cathedral should be rebuilt) going forward — and in some ways, these questions are one and the same,” asserted E.J. Dickson in her Rolling Stone article.

“But for some people in France, Notre Dame has also served as a deep-seated symbol of resentment, a monument to a deeply flawed institution and an idealized Christian European France that arguably never existed in the first place,” continued Dickson.

The article’s most troubling assertion came from Harvard University architecture historian Patricio del Real, who said, “The building was so overburdened with meaning that its burning feels like an act of liberation.”

Rolling Stone chose to feature Del Real’s statement in its promotional tweet about the article.

“The building was so overburdened with meaning that its burning feels like an act of liberation.” We talked to architects and historians about the significance of Notre Dame — and what should happen next https://t.co/0tulGIjwMA pic.twitter.com/pNll70pJfF

The tweet was “‘ratio’d’” on Twitter, meaning it had more replies than likes and retweets,” according to a Fox News report, a clear signal that the Harvard University Historian’s declaration was met with an avalanche of disapproval.

As this article is being written, the Rolling Stone tweet has been “Liked” only 893 times and “Retweeted” just 400 times while receiving more than 4,400 mostly negative comments.

The backlash of criticism against the Rolling Stone piece has been deadly.

“There is no difference in the mindset that thinks this way than the ISIS freaks who destroyed ancient history sites in Iraq and Syria,” tweeted IowaHawk blogger David Burge.

There is no difference in the mindset that thinks this way than the ISIS freaks who destroyed ancient history sites in Iraq and Syria. pic.twitter.com/kHKpHiYPVp

“Notre Dame is not just a building—it’s an 856-year-old Catholic Cathedral, built for God, inside which Christians adore Him,” said Catholic author Brittany Pettibone. “It can never be ‘overburdened with meaning.’ These architects can take their slimy ideas of redesign and flush them down the toilet.”

Notre Dame is not just a building—it’s an 856-year-old Catholic Cathedral, built for God, inside which Christians adore Him. It can never be “overburdened with meaning”. These architects can take their slimy ideas of redesign and flush them down the toilet.

“It’s not as if in rebuilding the church one is necessarily building a monument to the glorification of medieval catholicism and aristocracy,” said Jeffrey Hamburger, a professor of art history at Harvard University whose research focuses on the art of the High and later Middle Ages, offering a non-religious justification for re-creating the original structure.

“It’s simply the case that the building has witnessed the entire history of France as a modern nation,” said Hamburger.  “(You) can’t just erase history. It’s there, and it has to be dealt with critically.”

“Notre Dame is an absolutely unique place, at the heart of the île de la cité, from Roman Lutetia to greater Paris, a land unto itself. This disaster has aroused an immense wave of emotion in the hearts of architects who every day are building and rebuilding the history of architecture,” said French architect Dominique Perrault, who recently conducted an in-depth study on how to revive the entire île de la cité, according to a DesignBoom report.

Perrault and others are simply noting that there is no way that Notre Dame can be replicated exactly, because construction techniques have advanced, and construction materials available eight or nine centuries ago might no longer be extant.

“The stone that makes up the structure would be cut using machinery and not by hand by small armies of stonemasons as it was in the 12th century,” notes Kiona N. Smith, writing at ArsTechnica. “Another thing that would be impossible to come by is the amount of trees it would take to replace the roof timbers. In that sense, the value of craftsmanship will likely change.”

“The rebuilding of Notre Dame will be an extremely delicate undertaking, and we must not allow ourselves to be discouraged by the irreversible loss of the medieval ribbed roof, also known as ‘the forest,’” continued Perrault. “Our heritage is a sedimentation deposited across the ages, with practically each century leaving its imprint on the cathedral. ‘Every wave of time superinduces its alluvion.’  It will have to be rebuilt, and without altering the substance of its heritage.”

Notre Dame de Paris is one of the world’s most preeminent examples of Gothic architecture — a unique French architectural innovation, born when Abbott Sugar undertook the rebuilding of Saint Denis, completed around 1144.