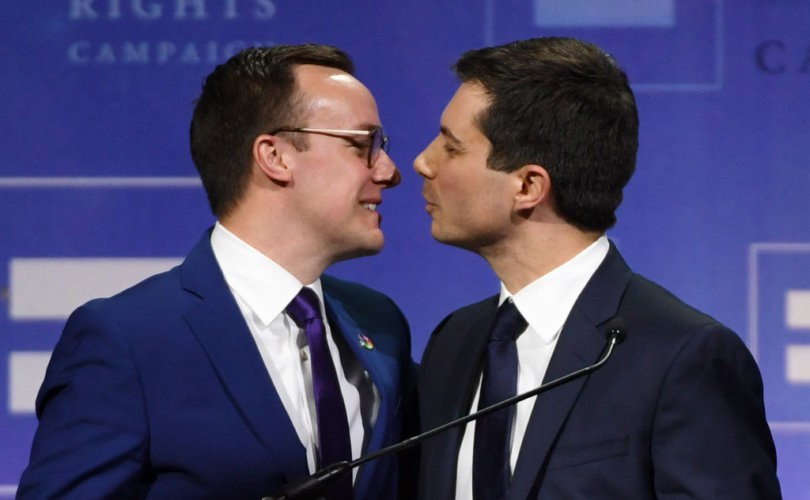 SOUTH BEND, Indiana, July 10, 2020 (LifeSiteNews) – The Catholic University of Notre Dame has announced the hiring of Pete Buttigieg, a pro-abortion homosexual who is ‘married’ to another man, as a 2020-2021 faculty fellow at the Notre Dame Institute for Advanced Study (NDIAS). Buttigieg is the former South Bend mayor who ran as a Democratic presidential candidate.

Buttigieg’s new position at the Catholic University comes as a surprise in view of his high profile political campaign which revealed to the American public a personal life and beliefs which stand in direct opposition to moral teachings of the Catholic Church.

Although baptized a Catholic and having attended a Catholic high school, Buttigieg is a self-identified gay who ‘married’ a man in an Episcopal Church ceremony.

Buttigieg “has become a national advertisement for the normalization of same-sex marriage,” noted a statement by the Sycamore Trust ––a Notre Dame alumni group which seeks to protect the school’s Catholic identity–– after the candidate was honored by the Gay and Lesbian Alumni Association of Notre Dame (GALA) last year.

While vying for the Democratic party’s presidential nomination, Buttigieg inferred that God made him gay, supported gay rights over religious liberty, and very publicly encouraged a 9-year-old boy to ‘come out’ as gay.

He even went so far as to say that homosexual ‘marriage’ had brought him “closer to God.”

In April 2019, liberal pundits and social media swooned over his announcement that he and his ‘husband,’ Chasten, planned to “have a child.”

Moreover, Buttigieg supports abortion on demand and has refused to condemn infanticide.

While mayor of South Bend ––home to the University of Notre Dame–– Buttigieg vetoed a city council rezoning plan permitting the pro-life Women’s Care Center to locate next to a newly opened abortion facility.

But Buttigieg’s antipathy toward bedrock Catholic teachings did not prevent him from being hired by the Catholic University.  Notre Dame said it was “thrilled” to have Buttigieg

“I’m thrilled to welcome Pete to the institute and Notre Dame in the coming year. More than ever, we need scholars and public leaders working together, generating the insights that will make democratic institutions stronger and advance the common good in creative and evidence-based ways,” said Meghan Sullivan, director of the NDIAS.

A Facebook posting by NDIAS declared the same sentiment: “NDIAS is thrilled” to have Buttigieg.

Some respected Catholics, however, are pointing out the discrepancy of having a Catholic university hire someone who lives a life contrary to basic Catholic teaching.

“The fact that the goals of Notre Dame are not the same as those of the Gospel becomes clear, again, with the naming of Pete Buttigieg as a faculty fellow at the NDIAS,” said Janet Smith, a former philosophy professor at Notre Dame.

“He holds many positions completely at odds with the Gospel, among them, he is in a homosexual ‘marriage’, and he supports abortion and holds views on religious freedom that would greatly restrict that freedom,” Smith told LifeSiteNews.

“It is inconceivable that Buttigieg will be advancing Gospel values in the work he is to do in exploring how trust is to be restored to political institutions and in the course on trust he will be teaching to undergraduates,” continued Smith. “He has abundantly indicated that he is not to be trusted as one who lives by or advocates Gospel values.

But clearly, he is not the only problem – the bigger problem is the NDIAS itself.  They cannot be trusted – their announcement of Buttigieg’s appointment makes no mention of his support of the LGBTQ agenda, of his support for abortion, or his desire to limit religious freedom.  Parents and students who trust Notre Dame to foster the Catholic faith are being deceived, again.

William Dempsey, a 1952 Notre Dame graduate and chairman of the Sycamore Trust, told Church Militant (CM) that the appointment of Buttigieg is “worse than the university's recognition of former president Barack Obama and vice president Biden.”

“Buttigieg's ‘partner’ will be given spousal benefits as a part of the Notre Dame community, teaching undergraduates,” explained Dempsey.  “His presence will radically still the voices who would teach Catholic doctrine and will radically undermine anyone who dares teach authentic Catholicism.”

“Though he possesses an impressive background and experience, I do believe Buttigieg’s  hiring continues a pattern I have seen at Notre Dame over the last decade or so and that is the slow erosion of maintaining a strong Catholic identity and supporting Catholic values,” observed Mark Nishan, class of 1976.

“I understand the desire of the University to welcome diversity and different thinkers to challenge thought and creativity,” said Nishan, “but it is disappointing that they embrace allowing  those who openly oppose catholic teachings and values to teach within it.”

“I can only say this incident continues a troubling trend I am observing,” he added.

Lecturing about ‘trust’ while undermining it

Buttigieg will work on two research projects at the NDIAS: one that explores how to restore trust in political institutions and another that considers the forces distinctively shaping the 2020s. He joins a group of more than 30 faculty and student fellows who will be conducting research on the nature of trust, the institute’s 2020-2021 research theme.

As an NDIAS faculty fellow, Buttigieg will join the NDIAS fellows and students in weekly work-in-progress seminars and other academic programming. He will also engage the broader campus community by teaching an interdisciplinary undergraduate course on the importance of trust as understood through different fields. The seminar draws on literature, politics, economics and philosophy and students will have the opportunity to engage with other guest experts.

While chosen to lecture on “trust,” the choice of Buttigieg to join NDIAS may serve to further undermine trust in the school's Catholic identity.

“Five decades of involvement in life issues and politics have taught me that trust is built on authenticity and, for a Catholic, informed familiarity with one’s faith tradition and duties in the public square,” said Notre Dame graduate Chuck Donovan (1974), president of the Charlotte Lozier Institute, an organization devoted to promoting the value of human life and the family.

“So much that parades in political life today is threadbare theater,  Notre Dame is at its best when it reaches back to ancient precepts and applies them with clarity to new situations,” Donovan told LifeSiteNews.  “Students should expect the university to dig a little deeper when it is building a faculty or curriculum.”