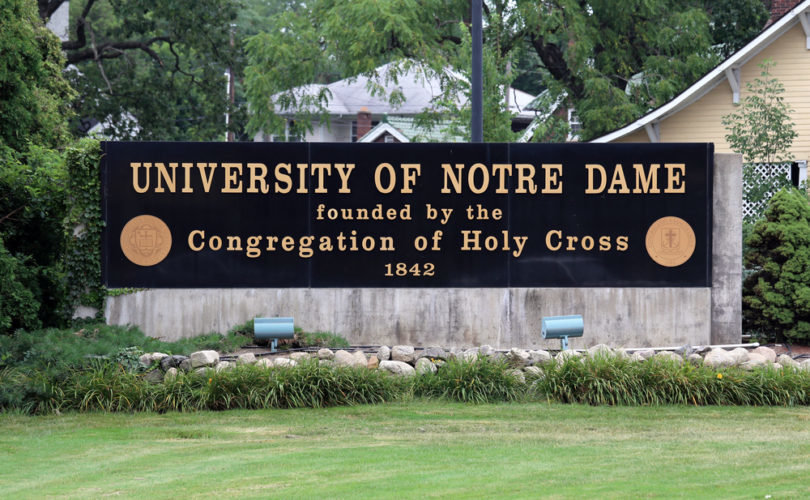 February 6, 2015 (CardinalNewmanSociety.org) — The University of Notre Dame recently announced that Father John Jenkins, C.S.C. has been elected by the Board of Trustees to serve a third five-year term as president of the University, despite the many instances of Catholic identity abuse that have occurred during his tenure.

Most notably, in 2009, Fr. Jenkins made the controversial decision to honor President Barack Obama at that year’s commencement ceremony, despite his pro-abortion policies. The Cardinal Newman Society organized a prayerful petition asking Fr. Jenkins to rescind the invitation. The petition garnered more than 367,000 signatures. Eighty-three cardinals, archbishops, and bishops—including Notre Dame’s local ordinary Bishop John D’Arcy—opposed the University’s decision. Regardless, Obama was awarded an honorary law degree at the ceremony and featured as a keynote speaker.

Campus performances of the scandalous play  The Vagina Monologues  were  approved by Fr. Jenkins in 2008. Bishop D’Arcy repeatedly condemned the play for its immoral content. Fr. Jenkins’s consent was symbolic of the mounting secularization of issues at Notre Dame, according to the alumni group SycamoreTrust. The University subsequently stopped holding performances.

In 2011, Roxanne Martino, a newly appointed member to the University’s Board of Trustees, was revealed by The Cardinal Newman Society to have contributed thousands of dollars to abortion advocacy groups, specifically the Chicago Foundation for Women and EMILY’s List—an organization dedicated to electing “pro-choice Democratic women.” The Society’s report and subsequent research from Sycamore Trust eventually led to Martino’s resignation.

Notre Dame’s approval of a University-recognized homosexual student organization in 2012 was hailed as historic by the student newspaper. But this action was thrown into sharp relief in 2014 when a club seeking to promote Catholic teaching on marriage was protested by the student “gay-straight alliance,” PrismND. The new club, Students for Child Oriented Policy (SCOP), was initially denied University recognition, but later gained its status as an official student organization.

In January of 2014, it was reported that Notre Dame intended to comply with the HHS mandate by accepting the Obama administration’s “accommodation,” which ensured offensive coverage for employees, even as the University continued to pursue litigation against the mandate.  Dismayed alumni decried Notre Dame’s compliance as setting a poor standard for other Catholic organizations involved in HHS mandate lawsuits and indirectly contributing to “a substantial number of drug-induced abortions, contraceptions and sterilizations.”  The University renewed its student health plan later in the year, providing students with free contraceptives and abortifacients as required by the HHS mandate.

Also in 2014, the Newman Society discovered that the University continued to undermine its case against the HHS mandate by selecting a new trustee who publicly advocated for the mandate. The appointment of Katie Washington to the Board of Trustees was criticized by Sycamore Trust as “inexplicable, insupportable, and incriminating,” and the Trust proceeded to call for her immediate dismissal.

Moreover, late last year, the University announced the extension of “employee benefits to same-sex spouses” following the Supreme Court’s refusal to hear appeals of lower-court cases striking down same-sex marriage bans.  Father Wilson Miscamble, a Notre Dame professor who has spoken out on Catholic identity concerns at the University in the past, called the news “deeply troubling” and “revelatory of the direction of the current Notre Dame administration.”  Notre Dame’s current ordinary, Bishop Kevin Rhoades, published comments concerning the decision, including a reminder for the University that Catholic teaching on marriage cannot be reduced to a “view,” as the University’s statement seemed to imply.

In light of Fr. Jenkins’ re-election, the Notre Dame trustees reportedly issued a resolution praising him for “unfailing commitment to the University’s Catholic character as well as to teaching and research excellence” which “have brought renewed emphasis to Notre Dame’s distinctive mission.”