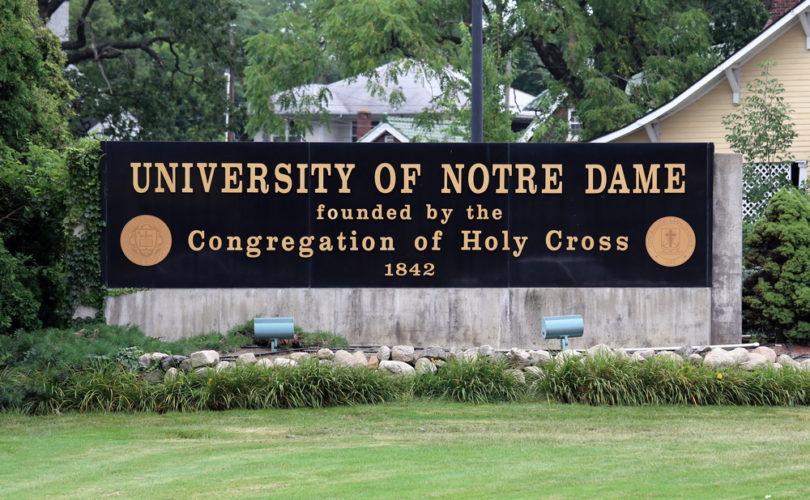 NOTRE DAME, Indiana (LifeSiteNews) — For years, the University of Notre Dame has compromised its Catholic identity through association by taking stands at odds with the Bible on issues such as homosexuality and contraception, and in the wake of the U.S. Supreme Court’s potential overturn of Roe v. Wade this summer, some of the school’s professors have engaged in arguably the most overt break from Catholic principles yet.

On May 4, Notre Dame global affairs professors Tamara Kay and Susan Ostermann published an essay in left-wing Salon claiming that prohibiting abortion would constitute “violence against women,” “irreparable harm,” and “traumatic sexual abuse,” whereas “abortion access” is “[c]onsistent with integral human development that emphasizes social justice and human dignity” and “respects the inherent dignity of women.”

Two days later, Kay and Ostermann published another essay at the Los Angeles Times, this time with sociologist Tricia Bruce, an affiliate of Notre Dame’s Center for the Study of Religion and Society. That piece attempts to make the case that “[a]bortion saves women’s lives,” in the process repeating the dubious claim that “outlawing abortion does not actually reduce it.”

Both essays were promoted on social media by Notre Dame’s Office of Public Affairs and Communications, despite the university’s official policy to “recogniz[e] and uphol[d] the sanctity of human life from conception to natural death,” “[c]onsistent with the teaching of the Catholic Church on such issues as abortion”:

.@KeoughGlobalND's Tamara Kay and Susan Ostermann and Tricia Bruce, affiliate of the Center for the Study of Religion and Society write for @latimes: Op-Ed: Pregnancy is risky. Losing access to abortion puts women’s lives at stake https://t.co/sPKjFqeTFL

While the school’s public relations account has shared pro-life articles as well, the Right to Life representatives argue that to give pro-abortion apologetics any promotion “behind a veil of supposed ‘neutrality’” is an affront to the school’s stated values.

“Abortion is a direct, intentional attack on the dignity of human life, and we cannot tolerate it under any circumstances,” they write. “Notre Dame presents itself to the world as a Catholic pro-life institution, but it has promulgated the pro-abortion narrative under the guise of promoting professors’ work.”

“Individuals look to institutions for guidance and stability, especially in a tumultuous political climate,” the authors conclude. “Notre Dame fails to provide witness to its Catholic mission when its public-facing offices elevate false and immoral arguments in one of the most important moral debates before us. Notre Dame must give witness to the truth of the Catholic faith at all times and take a consistently Catholic stance on this grave issue. Anything else is unacceptable.”

Past Notre Dame violations of Catholic principles include participation in LGBT “pride” month, mandating COVID-19 vaccines despite their use of fetal cells from aborted babies, and insuring abortifacient birth-control methods.