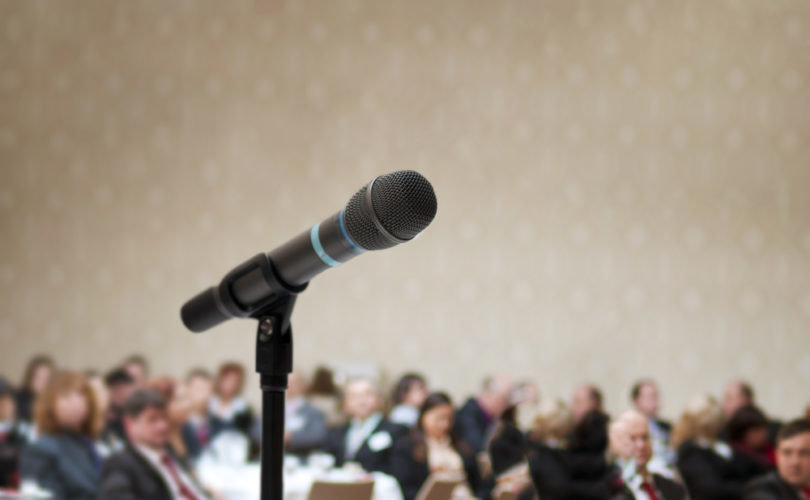 Winters is a columnist for the heterodox National Catholic Reporter, which its local bishop declared to have no legitimate claim to its “Catholic” label. By his caustic attacks on bishops and lay Catholics, Winters has encouraged divisions between his readers and those who are faithful to the Church.

Winters will join Fr. Jenkins, Bishop Daniel Flores of Brownsville, Texas, and two academics for a panel headlining the April 27 and 28 conference at Notre Dame, “Polarization in the U.S. Catholic Church: Naming the Wounds, Beginning to Heal.” The panelists will address the question, “How can we heal the division and reestablish the virtues of solidarity, love and humility at the heart of the Christian message?”

“Notre Dame has made a strikingly poor choice of Michael Sean Winters as a panelist alongside Father Jenkins,” said Patrick Reilly, president of The Cardinal Newman Society. “Winters’ publication features prominent dissidents and works against Christian unity, and he has used his own columns to attack the Church’s most loyal sons and daughters.”

Reilly said the choice of Winters raises serious concerns about the tenor of the panel and conference.

“The panel’s topic of ‘polarization’ in the Church can be deceptive and even dangerous, if it does not clearly embrace Christian unity as faithful to Jesus and His Church, including His teachings as they come to us through the Church,” Reilly said. “Do we seek to be humble before God, or is ‘humility’ a code word for complacency within a culture of relativism and opposition to the Church? Today’s polarization in the Church is the consequence of decades of dissent and confusion, which have blinded many people from recognizing the Church’s genuine love for them.”

Notre Dame sociologist Mary Ellen Konieczny, one of the conference organizers, stated in the news release that the conference is “deeply intertwined with Notre Dame’s Catholic mission.” However, Winters’ history of antagonism could impede the conference’s stated mission and serve as a platform for continued division at Notre Dame and elsewhere.

According to a conference advertisement:

It is no secret: the body of Christ in the United States is broken. Division and disunity prevail. Effects of this brokenness are by now familiar, especially at a place like Notre Dame. Only rarely does a genuinely diverse group of Catholics come together to name our wounds—with the goal of beginning to heal.

But the National Catholic Reporter‘s troubling history includes undercutting U.S. bishops on critical issues such as contraception, abortion, religious freedom, homosexuality, marriage and female ordination. As far back as 1968, Bishop Charles Helmsing of Kansas City charged the newspaper with “heresy” and urged the newspaper to remove the term “Catholic” from its masthead.

…In as much as the National Catholic Reporter does not reflect the teaching of the Church, but on the contrary, has openly and deliberately opposed this teaching. I ask the editors in all honesty to drop the term “Catholic” from their masthead. By retaining it they deceive their Catholic readers and do a great disservice to ecumenism by being responsible for the false irenicism of watering down Catholic teachings.

I have received letters and other complaints about NCR from the beginning of my time here. In the last months I have been deluged with emails and other correspondence from Catholics concerned about the editorial stances of the Reporter: officially condemning Church teaching on the ordination of women, insistent undermining of Church teaching on artificial contraception and sexual morality in general, lionizing dissident theologies while rejecting established Magisterial teaching, and a litany of other issues.

…When early in my tenure I requested that the paper submit their bona fides as a Catholic media outlet in accord with the expectations of Church law, they declined to participate indicating that they considered themselves an “independent newspaper which commented on ‘things Catholic.’”  At other times, correspondence has seemed to reach a dead end.

In light of the number of recent expressions of concern, I have a responsibility as the local bishop to instruct the Faithful about the problematic nature of this media source which bears the name “Catholic.” While I remain open to substantive and respectful discussion with the legitimate representatives of NCR, I find that my ability to influence the National Catholic Reporter toward fidelity to the Church seems limited to the supernatural level. For this we pray: St. Francis DeSales, intercede for us.

The Cardinal Newman Society is not alone in noting the Reporter’s biased reporting and even opposition to Catholic teaching, as well as concerns with Winters’ columns. Blogger Father John Zuhlsdorf has repeatedly accused Winters of unfair tactics in his writing. The Catholic League for Religious and Civil Rights called on Winters to resign from his position due to unfair attacks on Archbishop John Nienstedt of St. Paul-Minneapolis. Other divisive articles by Winters have drawn significant rebuttals at Aleteia (for biased reporting against Cardinal Raymond Burke), Catholic World Report (for “crazy” rhetoric against editor Carl Olson), Catholic League (for an “unseemly attack” on the Acton Institute’s Father Robert Sirico), First Things (for “distortions and errors” about Archbishop Charles Chaput) and Catholic Vote (for a “shameful case of hearing only what one wants to hear” about, again, Archbishop Chaput).

Susan Brinkmann wrote about Winters in her Women of Grace post:

It is amazing to me that a newspaper which has been attacking the basic tenets of the Catholic faith for decades with such audacity that several bishops have publicly condemned it is now suddenly concerned about healing the Church. My suggestion to Mr. Winters is that if he and his news organization truly want to heal the Church, they should start by cleaning their own house first.

Winters often resorts to ad hominem attacks that demonize Catholic leaders. “Nothing quite like being attacked by Bill Donohue to make a liberal Catholic’s day,” Winters gleefully wrote in 2012 about the president of the Catholic League. “Donohue is to informed discourse what Hurricane Isaac is to the Louisiana coast, all blustery and destructive wind.”

Again, in 2012, Winters took exception to a LifeSiteNews article, stating that “Life Site News is to the pro-life cause what Grover Norquist is to tax policy, an example of extremists who, like most extremists and all heretics, take one truth and one truth only, and let it run amok.” He holds himself to a different standard of journalism, but admits that he sometimes fails in his obligation “to render opposing views without distorting them.”

Bishops have also been targets of Winters’ criticism. Despite claiming to have never “ranted about a Church doctrine except in its favor,” he admits to “have ranted against a couple of prelates, but dang it, some of them deserve it.”

Recently, Winters slammed Cardinal Justin Rigali and Cardinal Raymond Burke for having “a deeply skewed sense of the type of leadership the Church in the United States needed” when serving on the Congregation for Bishops. In particular, he called the appointment of Archbishop Salvatore Cordileone to San Francisco “deeply regrettable” and a “mistake” by Pope Benedict XVI.

It appears that Winters makes a habit of “trying to drive a wedge between American bishops and the Pope,” Stephen White wrote for Catholic Vote, with regard to Winters’ distortion of Philadelphia Archbishop Charles Chaput’s words to make the claim that the Archbishop publicly challenged Pope Francis.

“It’s possible Winters was unaware of Archbishop Chaput’s full remarks, though one would think that before blasting away, Winters might have bothered to check the full remarks,” White states in his article. “No, it seems more likely that Winters simply heard what he wanted to hear… and ran with it. The Church has enough division within it already, must we really be so eager to find it where it doesn’t exist?” Winters eventually tried to explain his article, but, as White noted, he continued to miss the point and misconstrue Archbishop Chaput’s words.

Winters has even distorted the words of Pope Francis to serve his own ends. In his 2013 attack on Archbishop Cordileone’s defense of traditional marriage and religious freedom, Winters attempted to use the Holy Father’s words against the archbishop, thoroughly out of context.

“The Church is a big ship, and she does not turn quickly. So, perhaps it would be expecting too much for the bishops to get with a new program too quickly,” Winters wrote in his post. “This summer the pope, when asked about a gay monsignor, said, ‘who am I to judge?’ This was widely reported. Apparently, albeit unreported, the Holy Father intended to leave judgment to Cordileone.”