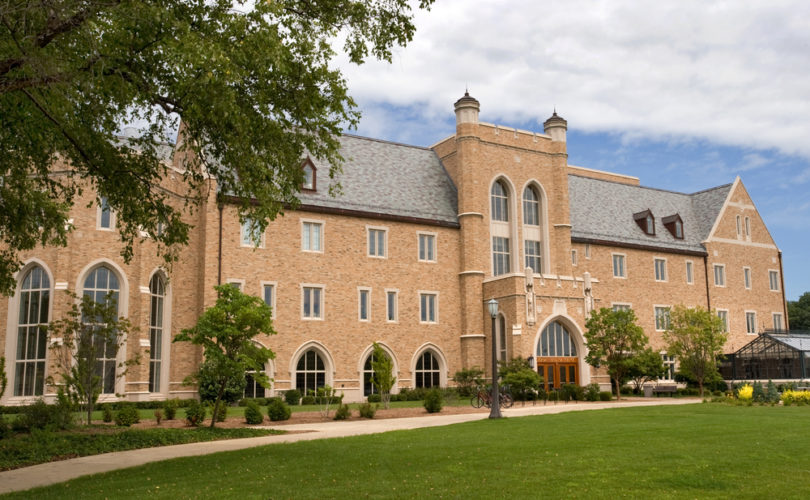 A conference today at the University of Notre Dame will address “a pastoral strategy for parishes to be able to receive the gifts of self-identified gay Catholics,” while remaining faithful to Catholic teaching on marriage and sexuality—but some speakers’ perspectives on “gay identity” may fall short of true orthodoxy.

“Gay in Christ: Dimensions of Fidelity” is co-sponsored by Notre Dame’s Institute for Church Life (ICL) and the Gender Relations Center. ICL director Dr. John Cavadini poses the following question on the University’s website: “Can Church teaching support an ‘exchange of gifts,’ enabling a parish community to receive the gifts that such people bring to us, and, in turn, to make the gifts of ecclesial belonging more securely and fruitfully available to these Catholics?”

Notre Dame indicates that many of the slated speakers for the conference are “self-identified gay Catholics” who observe Church teaching on marriage and sexuality and are celibate. But according to Austin Ruse, president of the Catholic Family and Human Rights Institute, some of the speakers are too positive about homosexuality—describing it as something greater than physical, same-sex attraction—and may cause harm by arguing for the inherent good of a “gay identity.”

“We are all children of God [and] we are not identified by our emotional and sexual desires,” Ruse told The Cardinal Newman Society in an interview. “Moreover, there is no such thing as ‘gay exceptionalism,’ that is, gifts that are unique to the person who is same-sex attracted.”

Ruse warns that such ideas have the danger of confusing young people and leading them in the wrong direction.

One of the scheduled speakers, Chris Damian, was interviewed by The Observer, Notre Dame’s student-run newspaper. Damian is a graduate of Notre Dame and recently gave a presentation at Notre Dame titled “Gay and Catholic.”

He reportedly stated that “the language and rhetoric of the Catechism regarding homosexuality tends to be misrepresented and misunderstood by Catholics, specifically passages that refer to homosexuality as an intrinsic disorder.”

He told The Observer:

I’m going to argue that the way in which the Catechism treats homosexuality is actually quite different for how it’s understood in the broader culture. The more I’ve thought about it, it seems to me that while the desire for sexual intimacy with a person of the same sex is a significant part of the gay experience, it is only one aspect of it.

This perspective is echoed by another conference speaker, Joshua Gonnerman, who published a piece for First Things titled “Why I Call Myself a Gay Christian.”  He wrote:

There are many things I find valuable about my experience of being gay… Gay Christians are, perhaps, “called to otherness”… [The] suggestion is that people with same-sex desire experience a kind of attraction that, when not concupiscent, is a gift to the Church.

Ruse argues in Crisis Magazine that this approach leads some advocates to want more than genuine fidelity to Catholic teaching:

A Slate article about the Notre Dame conference is titled, “The Catholic Church is Changing, and Celibate Gays Are Leading the Way.” The article claims that “the [C]hurch has opened itself to change because the general public’s attitudes have shifted so profoundly that its condemnation of gays has begun to seem heartless and out of touch.” The piece praises some Catholics for “validat[ing] the stability of same-sex attraction throughout a lifetime.”

“As long as orientation-change was viewed as a viable option, gay men and lesbians could still be viewed within a framework of sinfulness and disobedience,” the article continues. However, “by identifying themselves as gay or lesbian… they affirm the unique difficulties and challenges LGBTQ people face in a culture organized around heterosexual marriages and families.”

Ron Belgau, another of the Notre Dame conference’s planned speakers, reportedly told Slate that “there’s beginning to be a realization that the same-sex marriage fight is a losing one, and Christians have made themselves look pretty bad in the process.”

In 1986, Cardinal Joseph Ratzinger, as prefect of the Congregation for the Doctrine of the Faith, released a letter to the bishops on “The Pastoral Care of Homosexual Persons.”  In it, Cardinal Ratzinger explained that “the human person, made in the image and likeness of God, can hardly be adequately described by a reductionist reference to his or her sexual orientation.” He continued, the Church “insists that every person has a fundamental Identity: the creature of God, and by grace, his child and heir to eternal life.”

Daniel Mattson, who struggles with same-sex attraction but remains celibate, embraces Ratzinger’s letter and disagrees with the practice of self-identifying as “gay” and Christian.

He writes in First Things:

I think it is a mistake to view homosexuality as a gift, in and of itself. Those who identify as gay speak of the great gifts that supposedly flow from their homosexuality. But of course, any goods that are supposedly unique to homosexuality are common to man, and all that is good in man is the result of being made in the image and likeness of God.

In correspondence with The Newman Society, Cavadini said that he planned Notre Dame’s “Gay in Christ” conference “as a ‘workshop’ style conference that was exploratory and on the small side, not a conference that proclaims immediate results or even settled views.”

He also explained that he has no intention “of valorizing ‘coming out’ or of saying that declaring yourself ‘gay’ is the best thing you can do if you have same-sex attraction, and to the best of my knowledge, no one speaking at this conference believes that. THAT would be misleading students, potentially.”

But he suggested that someone who self-identifies as gay and defends Church teaching might prove resourceful in reaching young people with same-sex attraction.

Suppose you have a kid who tells you they are “gay.” You try to convince him that he is “struggling with same-sex attraction.” He says, “No, I’m not, I’m gay, and I know the Church is anti-gay and I intend to leave the Church as soon as I am able.” I have seen this scenario worked out with friends of mine, with parents who are good conservative Catholics, and indeed their kid(s) have left the Church and remain hostile.

What if there were someone in the parish, self-identified as “gay,” and was public about agreeing with Church teaching on marriage. I would, if it were my kid, immediately send him to talk to this person. Someone like this person, who apparently has resources for defending Church teaching and can provide support and advice for someone, showing that it is possible for people to be this way and live this way faithfully in the Church, that there are options here, including the option of marriage (meaning as the Church understands it), and including the option of not running your life as though your sexual orientation was in fact your whole identity.

I think that such a person, self-identified as “gay,” and also equally self-identified as defending Church teaching, has something to offer, a gift, and I wonder if the Church is very good at receiving this gift. It seems that this is a way of helping someone who “struggles with same-sex attraction,” if by “helping” you mean, helps them to live according to Church teaching.

Cavadini seems to be aware of concerns about this approach to pastoral care, but he endorses it:

I think the option of a self-identified gay Catholic who is living according to Church teaching, defending it, and becoming more holy and loving in doing so, can be a great asset in the Church, without also going so far as to say, this is the paradigm for everyone, or that this exhausts the strategies that the Church should have. I think this is one strategy that could be very helpful and am, with this conference, trying to explore it more fully. It is not, and cannot be, the only strategy.