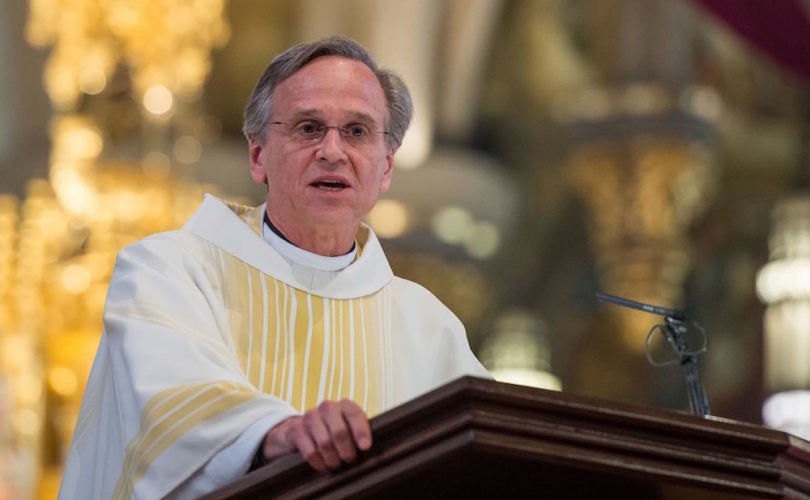 SOUTH BEND, Indiana, March 23, 2016 (LifeSiteNews) – Notre Dame’s president has taken aim at critics of the university’s latest departure from Catholic identity, and revived his defense of the school’s much-criticized decision in 2009 to honor pro-abortion Barack Obama.

“One of our great challenges today is that people who disagree often will vilify, will attack, will demean the opposition, and then they can’t work with the opposition,” Father Jenkins said. “So we come to this impasse of acrimony, of intransigence, and it doesn’t serve society.”

The priest was asked in an interview about “open gestures of dialogue” behind the choice of Biden and former House Speaker John Boehner, announced March 5, as the University’s 2016 Laetare medalists, a report from Notre Dame News said.

Boehner and Biden were selected as the 2016 medal recipients, “in recognition of their leadership, civility and dedication to our nation.”

An award recognizing outstanding service to the Catholic Church

The Laetare Medal is presented annually to an American Catholic in recognition of outstanding service to the Church and society, according to the university website. It is intended for a Catholic “whose genius has ennobled the arts and sciences, illustrated the ideals of the Church and enriched the heritage of humanity.”

And despite Biden’s support for abortion and homosexual “marriage” in conflict with the Church’s teaching, he is scheduled to receive the award with former Speaker Boehner at the University’s May 15 commencement ceremony.

The selection of Biden drew swift rebuke from Catholics.

A group of some 89 Notre Dame students published a letter in the student newspaper last week objecting to the Catholic university’s plan to honor Biden, and The Cardinal Newman Society also condemned the decision, calling it a betrayal of the Church and its Catholic mission.

“Apparently, some at Notre Dame still don’t get it,” Priests for Life National Director Father Frank Pavone told the National Catholic Register. “And this time, matters are made worse, because the pro-abortion public official being honored claims to be Catholic.”

“That is, it should be noted, he opposes Notre Dame’s claims of religious liberty,” Dempsey continued. “On all these crucial issues, the vice president’s service has been not ‘to the Church,’ but against the Church.”

“I believe it is wrong for Notre Dame to honor any ‘pro-choice’ public official with the Laetare Medal, even if he/she has other positive accomplishments in public service, since direct abortion is gravely contrary to the natural law and violates a very fundamental principle of Catholic moral and social teaching: the inalienable right to life of every innocent human being from the moment of conception,” Bishop Rhoades said in a statement. “I also question the propriety of honoring a public official who was a major spokesman for the redefinition of marriage.”

Father Jenkins had discussed the award selection with the bishop months ahead of time, and the bishop said while he understood the idea of encouraging civility and dialogue, he disagreed with the decision and voiced his concerns over honoring the vice president with him at the time.

A history of support for contravening Church principles

Father Jenkins has embraced government leaders, programs and other initiatives that conflict with the Church’s teaching in the past, while continually placing an emphasis on dialogue.

Despite the objection of 83 cardinals, bishops and archbishops, including the University’s local ordinary, and a petition signed by 367,000 people, Father Jenkins defended Notre Dame’s 2009 honoring of pre-abortion Barack Obama with an honorary degree and featuring him as a keynote speaker.

“There is much to admire and celebrate in the life and work of President Obama,” Father Jenkins told that year’s graduates, also saying he had no interest in seeking leniency for more than 80 pro-life citizens arrested for peacefully demonstrating on campus against the Obama appearance.

Other scandals during Father Jenkins’ tenure include his approval of performances of the Vagina Monologues, University recognition of a homosexual student group, willing compliance with the immoral HHS contraception mandate, and extension of employee benefits to “same-sex spouses.”

Father Jenkins is set to serve on a panel with contentious journalist Michael Sean Winters of the heterodox National Catholic Reporter publication as part of an April 27-28 conference Notre Dame is presenting on polarization in the Church.

It comes down to more scandal

Bishop Rhoades said it would have been better if the University had invited Biden and Boehner to speak at Notre Dame on the contentious topics at issue, “rather than bestow an honor that can provoke scandal.”

The Fort Wayne-South Bend prelate expressed repeated concern over scandal, as well as the specter of leading Catholics astray, and how promotion of homosexual “marriage” harms society.

“My principal concern about this whole matter is scandal,” Bishop Rhoades stated. “In honoring a “pro-choice” Catholic who also has supported the redefinition of marriage, which the Church considers harmful to the common good of society, it can give the impression to people, including Catholics in political office, that one can be ‘a good Catholic’ while also supporting or advocating for positions that contradict our fundamental moral and social principles and teachings.”