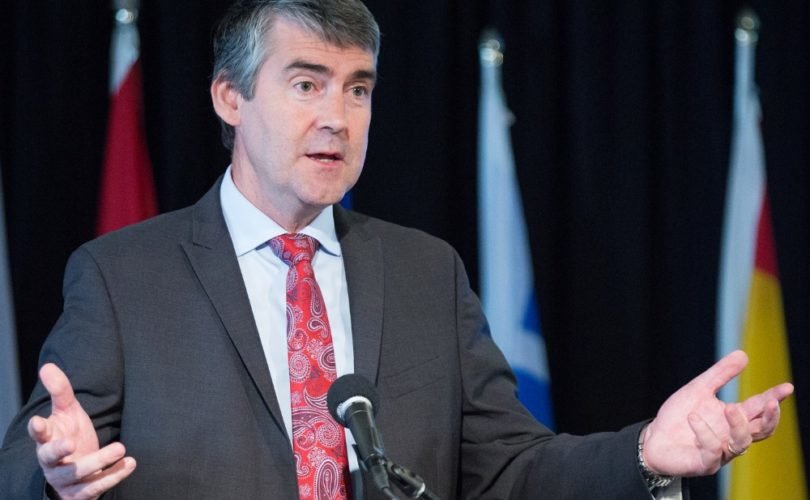 But just as the Liberals have turned from a pro-life party into a pro-abortion one, says Ellen Chesal, executive director of Campaign Life Coalition of Nova Scotia, so McNeil has evolved from a declared pro-lifer to a declared pro-abortion advocate. As for his MPs, says Chesal: they are far from free to admit to pro-life convictions.

McNeil’s remarks were reported in the Toronto Sun, buried in a story about Brian Gallant, the Liberal leader in adjoining New Brunswick, who not only is indicating he will provide public funds for all abortions there if he forms the government after the September election, but has echoed Trudeau’s ban on pro-life candidates.

But McNeil says the Nova Scotia Liberal Party, while strongly pro-abortion, welcomes pro-lifers. “They are in our party and there are members, dare I say, in our caucus. We have the most diverse government in the history of this province. … I'm very proud of the fact that members of our party get a chance to express those diverse views internally, and then we make a decision as a government on how to move forward.”

Chesal noted that when Campaign Life Coalition sent Liberal candidates questionnaires before the last election in October 2013, “they came back unanswered, every one, with the identical cover letter.”

Chesal also told LifeSiteNews how McNeil represented himself as pro-life in the 1999 election, and was supported by Campaign Life Coalition as such. But when opponents raised that record, apparently to darken his reputation with pro-abortion voters, Halifax Herald writer Dan Leger reported that “Liberal campaign spokesman Ryan Grant” told him McNeil’s views had  “evolved” since 1999 and he no longer supported Campaign Life’s “extreme positions.”

McNeil himself tweeted: “I support a woman's right to choose. A Liberal government would continue to protect that right in our province.”

I support a woman's right to choose. A Liberal government would continue to protect that right in our province.