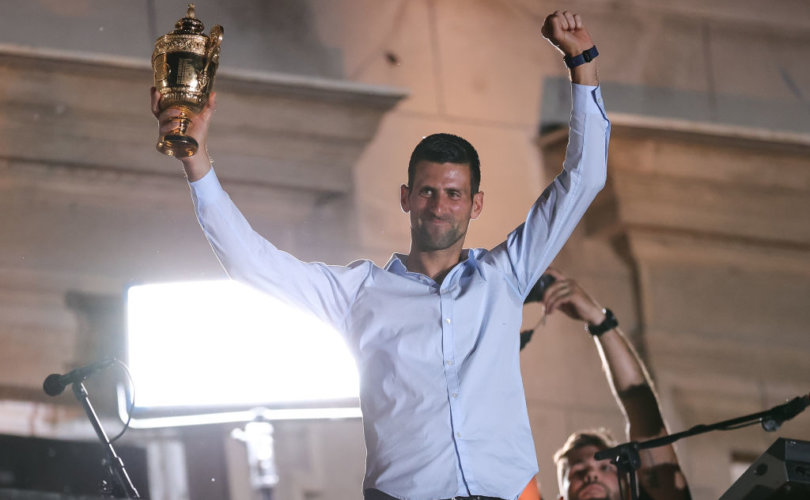 Novak Djokovic celebrates with his Wimbledon trophy during the welcoming ceremony in front of Belgrade City Hall on July 11, 2022 in Belgrade, Serbia. Srdjan Stevanovic/Getty Images)

On Thursday, the unvaccinated, Serbian tennis champion announced he was forced to withdraw from the tournament due to current Canadian border regulations which bar unvaccinated foreigners from entering, as reported by Gulf News.

Earlier this month, Montreal Masters tournament director Eugene Lepierre revealed he did not expect the tennis star to play in Canada.

“Either the Canadian government is going to change the rules regarding vaccination or he is going to roll up his sleeves and get the vaccine,” said Lepierre. “But I don’t think any of those scenarios are realistic.”

Djokovic, who has 21 Grand Slam men’s singles titles (2nd only behind Rafael Nadal), including a record nine Australian Open titles, will also likely be barred from participating in the U.S. Open which begins in August, as the United States also requires all visitors to be fully vaccinated.

Nor indeed does the likely loss of playing in the U.S. Open deter the tennis player from upholding his decision. In July, organizers of the 2022 U.S. Open tennis championships confirmed they would not allow Djokovic to play due to the current border mandates.

However, he remained hopeful that he would be able to play, tweeting, “I am preparing as if I will be allowed to compete, while I await to hear if there is any room for me to travel to US. Fingers crossed!”

I am preparing as if I will be allowed to compete, while I await to hear if there is any room for me to travel to US. Fingers crossed! 🤞🏼💪🏼https://t.co/cIDfdPtZ5t

The decision to bar Djokovic from playing has been condemned by many on social media, including health entrepreneur Vivek Ramaswamy.

“It makes no sense that Djokovic was able to enter America to compete in the U.S. Open in August 2021, but that he’s prohibited from defending… his title this year – when he recovered from Covid within the last 9 months, and Covid health risks have improved in the meantime,” he tweeted.

Missing the Montreal Tournament is hardly the first discrimination Djokovic has faced due to his unvaccinated status. In January, Australia canceled Djokovic’s visa for the second time, after the immigration minister deemed it was “in the public interest” to remove Djokovic from the country.

After a short-lived legal victory granting him permission to remain in Australia, he was deported amid so-called concerns over growing anti-vaccine sentiments in the country.