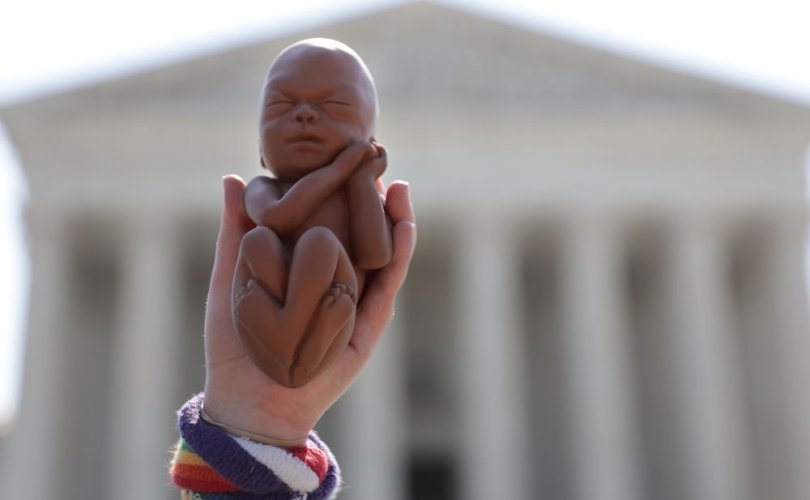 (LifeSiteNews) — Catholic pro-life advocates formally asked the U.S. Supreme Court this month to recognize the personhood of unborn babies under the U.S. Constitution. The push to recognize fetal personhood has the potential to produce a nationwide abortion ban if the Court affirms that the unborn are persons with guaranteed rights.

Catholics for Life filed the petition for a writ of certiorari with the Supreme Court on September 1, along with two expectant mothers representing their unborn babies referred to in the filing as Baby Doe and Baby Roe.

In the 46-page document, the petitioners request that the Court recognize the “personhood” of unborn babies under the U.S. Constitution’s Fourteenth Amendment, which ensures that no state shall “deprive any person of life, liberty, or property, without due process of law.”

According to the petition, Rhode Island’s 2019 Reproductive Privacy Act (RPA), which codified the “right to abortion” as defined in Roe v. Wade (1973), had “stripped Petitioners, Baby Mary Doe and Baby Roe, of their ‘personhood’” by repealing “Rhode Island General Laws § 11-3-4.”

The General Laws authorized the criminalization of abortion for 158 years until 2019. According to the since-repealed legislation, “human life commences at the instant of conception,” and an unborn baby is “a person within the language and meaning of the fourteenth amendment of the constitution of the United States.”

Now the U.S. Supreme Court has been asked to decide whether Rhode Island had “erred” in repealing the pro-life law in light of the Court’s landmark Dobbs v. Jackson Women’s Health Organization decision in June, which overturned Roe v. Wade (1973) and Planned Parenthood v. Casey (1992).

The petitioners argue that the Court “avoided the question of ‘when prenatal life is entitled to any rights enjoyed after birth’” when it handed down its decision in Dobbs, adding that their filing  “presents the opportunity for this Court to meet that inevitable question head on.”

According to the pro-lifers, the Court’s decision to declare Roe v. Wade “egregiously wrong from the start” and reverse Roe and Casey “surely signal rejection” of the prior determination in Roe that “the word ‘person,’ as used in the Fourteenth Amendment, does not include the unborn.”

RELATED: While the Supreme Court should be praised for overturning Roe, it didn’t go far enough

The authors of the petition say they aren’t asking “this Court to adopt any particular ‘theory of life”.

However, they request that the Court “identify the guarantees upon which Petitioners – and any unborn plaintiff regardless of gestational age – can rely for constitutional protection under the Fourteenth Amendment, and whether unborn human beings will categorically be denied access to the courts to challenge an abortion law.”

The petitioners state that their questions “are pointed and inevitable, in light of Dobbs,” and that the filing“ presents all that is necessary to resolve the unfinished business left by Dobbs.”

“Now is the time,” the pro-lifers argue.

If the Court chooses not to grant the request, the petitioners alternatively ask that the justices “vacate the ruling of the Rhode Island Supreme Court and remand the case for further proceedings in light of this Court’s decision of Dobbs v. Jackson – with specific guidance as to the analysis courts should take in this instance.”

It remains to be seen what success the petitioners will achieve. They previously failed to obtain a lower court injunction against Rhode Island’s codification of abortion, and have been stymied in attempts to appeal to higher courts, The Washington Examiner reported.

As the petitioners note in their filing, however, the U.S. Supreme Court’s June decision rolling back Roe v. Wade could put them in a stronger position than they faced in May.

At least four Supreme Court justices will need to grant their approval for hearing the case before it can be taken up.