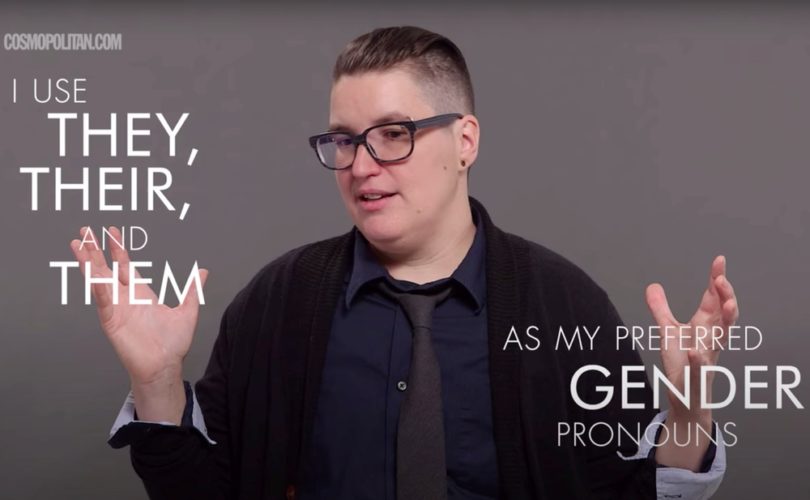 You could tell from the opening words of anchor Lulu Garcia-Navarro: “The Reverend Megan Rohrer has made history. They've been elected as the first openly transgender bishop in any mainstream American denomination – preferred pronouns they/them.“

Pronouns were harmed in the making of this “news” segment. The denomination is the Evangelical Lutheran Church in America, and Rohrer will preside from San Francisco over congregations across Northern California and Nevada.

Protestants now are apparently on an endless Reformation. Rohrer announced “As Lutherans, we pride ourselves on being ever reforming. And this is certainly a reformation moment if I've ever seen one.”

The propaganda paint-by-numbers hits the usual note of traumatized transgender people on the verge of suicide. Block explained “Rohrer hopes it's a moment, especially for transgender people, that will change and even save lives.” Rohrer explained: “There's almost not a week that goes by that someone doesn't reach out to me on social media and say, 'I chose to live today because I knew you existed.'”

BLOCK: Rohrer says the pressures on transgender people are especially dangerous now, with so much anti-trans legislation being proposed and passed around the country.

ROHRER: The weight of having people debate your dignity, the weight of angry, faithful people. Being the loudest for some people is too strong a weight to kind of hang on. And my hope is to be a voice that provides hope for people

There is not one second of a dissenting opinion, which is funny when NPR's logo right now says “Hear Every Voice.” For gender confirmation soundbites, they turn to gay Episcopal bishop Gene Robinson, who received this kind of laudatory one-sided publicity back in 2003 when he was installed.

BLOCK: Rohrer knows well how it feels to have your identity attacked. As a teenager in South Dakota, they were kicked out of a church youth group when they came out as a lesbian. The abuse continued later at a Lutheran college.

ROHRER: There were some people who tried to throw holy water on me to – I don't – exercise something or people who would be in the same religion classes as me and sing hymns whenever I would walk by. I didn't ever know what to do, so I would just sing harmony on the hymns.

BLOCK: And there were worse attacks both there and later when they became pastor of Grace Lutheran Church in San Francisco. So what might happen now that Rohrer is becoming bishop?

GENE ROBINSON: What will come towards them is a lot of vitriol and hatred. I can't describe to you how cruel and awful some of that is.

This was so one-sided that Block did not engage with the bad news that within ELCA, “they are projecting according to current trends, the church will basically cease to exist within the next generation.” Mainline denominations – the most in touch with the NPR zeitgeist – are bleeding members. This gets only a gentle reference at the end:

BLOCK: And maybe, just maybe, Pastor Rohrer says, this becomes a moment for a dwindling Lutheran church to grow.

ROHRER: I won't miss this opportunity to say, hey, join us in prayer, and join us in the pews. And if you are someone who's been longing for a moment like this, then come give the Lutherans a chance.

In case you're confused, Megan was a girl who became a “trans man,” but didn't change names. Cosmopolitan celebrated this in a 2018 YouTube video as Rohrer complained “most people's feelings about gay and lesbian people and trans people aren't rational.”

NPR is paid for by….you, the American taxpayer. When I clicked to listen to this, I got an ad for Comcast, the owners of NBC and MSNBC.