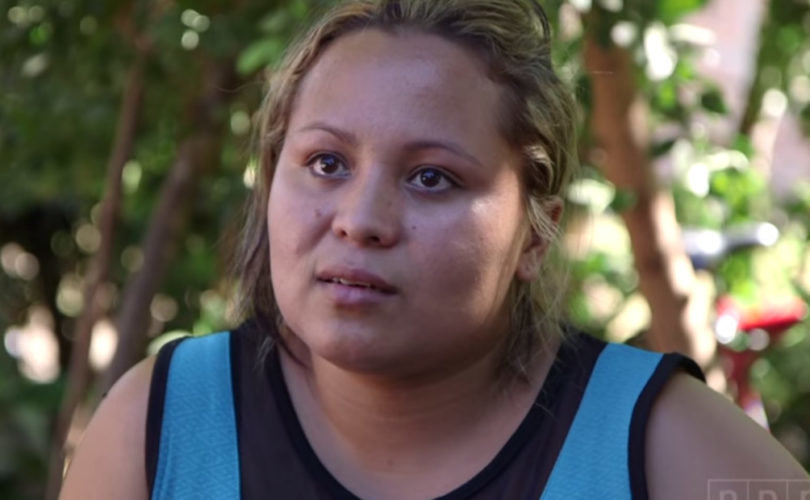 American media giant National Public Radio (NPR) published a report last week claiming to expose the underbelly of El Salvador’s pro-life legal system by profiling a woman whom they say was sentenced to 30 years for abortion after a stillbirth. On-the-ground evidence reveals, however, that the woman was in fact convicted for murdering her son after he was born alive.

In an intriguing twist, the article, which local pro-life leaders consider a “hit piece” on their pro-life laws, was published just three days before Amnesty International demanded that the Latin American country “decriminalise abortion on all counts.”

Titled “Why A Teenage Mom Was Jailed In El Salvador After A Stillbirth,” the NPR piece written by Jason Beaubien and John Poole presents Salvadoran Cristina Quintanilla as a victim of the country’s “nightmare” abortion law. Quintanilla, they report, was “dragged” before the courts in 2004 over the accusation of “having an abortion.”

But media reports from that time, as well as court documents obtained by LifeSiteNews through Salvadoran pro-life activist Evange Sol de Guirola, reveal that Quintanilla gave birth to a full-term baby boy who lived for two hours before dying. Quintanilla was charged with aggravated homicide in the death of her newborn son, not with having an abortion, as the NPR report alleges. Court documents, in fact, reveal that the case had nothing to do with abortion at all.

It is illegal for a mother to abort her child in El Salvador, the smallest country in Central America. In 1998, a massive pro-life effort resulted in the country removing exceptions from its 1973 penal code that permitted abortion, including to save the mother’s life, and in cases of rape and serious congenital disorder. In 1999, El Salvador, meaning “savior,” recognized for the first time “every human being” as a “person” from the “moment of conception.”

“The government’s repressive and outdated total ban on abortion is blighting the lives of women and girls in El Salvador, pushing them to unsafe, clandestine abortions or forcing them through dangerous pregnancies,” the organization said in a press release. “Those terminating their pregnancies could face years in prison.”

“The horrific repression that women and girls in El Salvador face is truly shocking and akin to torture. They are denied their fundamental right to make decisions about their own bodies and are severely punished if they dare to do so,” spokesperson Salil Shetty said.

The NPR story reports that Quintanilla was “17 at the time, and seven months pregnant with her second child” when she went into labor. Court documents reveal, however, that she was actually 18, and delivered a full-term baby of 40 to 42 weeks gestation. An official autopsy of the baby revealed he had been born alive and breathed on his own after someone had cut the umbilical cord.

The NPR authors state that a “woman accused of terminating a pregnancy in El Salvador can face up to 50 years in prison.” But according to Penal Code Art. 133, a woman convicted of consenting to an abortion can only be punished with imprisonment for 2-8 years. If the pregnant woman has an  involuntary abortion due to negligence, she cannot be punished at all, states Art. 137.

Abortion activists charge that abortions in El Salvador are often labeled as “aggravated homicide,” which carries a stiffer sentence. The abortion movement and sympathetic media have in the past, however, characterized infanticide cases as abortions in order to advance their legalization agenda.

The NPR authors also state that current law “requires doctors, nurses and other medical professionals to report suspected abortions.” But nowhere in the law does it state this.

Quintanilla’s sentence, they report, was eventually “overturned” after a young lawyer stumbled across her case.

Court documents reveal, however, that Quintanilla’s guilty verdict stood. Her lawyer appealed the ruling to the Supreme Court of Justice, arguing that Quintanilla should have been found guilty of involuntary manslaughter instead of committing intentional murder. The lawyer never contested the evidence that the baby had been born alive and breathed for two hours before dying. The lawyer’s case hung on the argument that there was no concrete evidence of Quintanilla’s direct involvement in the death of the newborn. The appeal was denied.

The lawyer filed another appeal, asking for a reduction of Quintanilla’s 30-year sentence. The court granted the appeal, stating that it found Quintanilla’s sentence to be excessive, severe, and disproportionate with the crime. Her sentence was reduced to three years, which she had already served, and she was set free.

The NPR authors highlighted the story of a 22-year-old El Salvador woman referred to as “Beatriz” — whom the international abortion lobby used as a hard case in May 2013 to justify changing national abortion laws — saying that the Salvadoran Supreme Court “refused to allow her an abortion despite her doctors saying carrying the baby to term could endanger her life.” In the end, Beatriz’s baby was delivered by C-section at 27 weeks. The baby girl died of natural causes and the mother went on to recover.

The authors conclude their story with these words: “This story is part of a series looking at the health implications of abortions in developing countries.”

“Amnesty International came to El Salvador to demand that we change our laws, that we make abortion legal and accessible to Salvadoran women. There is now a campaign against our country, our laws, our values, and our beliefs. It is a campaign based on lies and manipulation,” she told LifeSiteNews.

LifeSiteNews contacted NPR for comment and asked if it would retract the story. No response was given by press time.

In response to Amnesty International’s interference, the country’s congresswomen put forward a bill earlier this week to the Legislative Assembly asking it to reaffirm the constitutional right to life of the unborn.

“The dimension of the dignity of the human person is the one that is, at the very least, invulnerable and constant, whatever might be the situation of the individual,” states the bill.

This is not the first time mainstream media has been caught twisting facts to support the international abortion lobby’s agenda.

The New York Times ran a piece against El Salvador’s pro-life legislation in 2006 in which it highlighted the story of a woman who was reported to have had an illegal abortion when she was 18 weeks pregnant and was sentenced to thirty years in prison. A LifeSiteNews investigation at the time, however, found the story to be entirely false since court documents revealed the woman was actually found guilty of infanticide after she strangled her full-term baby shortly after birth. The New York Times initially refused to correct the story, but later issued a correction after the paper’s ombudsman called them out in a column published in the paper.