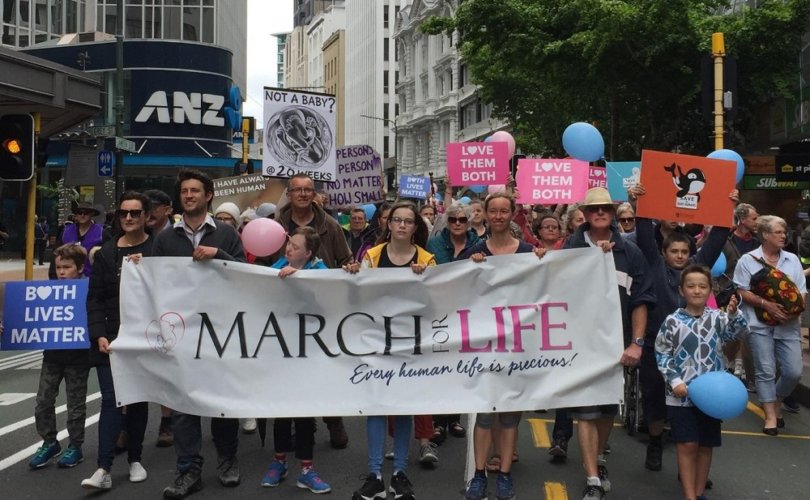 More than 2,400 people from all over New Zealand attended the March in Wellington, doubling in number from the previous year.

Joyful entertainment that celebrated the gift of life added to the atmosphere of expectation as people gathered to March. That mood continued through the streets of Wellington as the large group made its way to Parliament Grounds.

Personal stories had a powerful impact and brought home the reality of abortion, unexpected pregnancy, and the hope that can be found in difficult circumstances.

Naomi, who had an abortion 10 years ago, expressed her dismay at not being told how alone she would feel.  She shared her own pain, shame, guilt, and the long path to healing after her abortion.

“Women are hurting and broken everywhere,” she said. “They are looking for open hearts to sit with them in their brokenness.”

She concluded her powerful testimony by issuing a challenge to the crowd to love no matter what.

“As you arise to be a voice for the voiceless … make sure you are known to be a safe place,” she said. “That you’ll love women no matter what.  No matter the choices they choose to make and that you will sit with them in their darkest hour. Be that someone they can talk through their fears, their options, their future and a place to come when and if they are broken because of abortion. Love them both without reservation. Love her no matter what and do not turn away.”

Another young woman, Joanna, spoke of her surprise when at 17 she told her parents she was pregnant and found that, contrary to what she expected, they were supportive and encouraging. Others in the community were not so encouraging.

At 19, Joanna opened her own café and later on furthered her studies. “Having my baby did not stop me from achieving my dreams. In fact, she motivated me to be the best me possible,” she declared.

The hearts of everyone present were captured by nine-year-old Reuben, who has Down syndrome, as he stood proudly next to his parents, Aggie and Derek Brown, on the stage. Aggie spoke of her surprise and joy at learning she would finally be a mother at 48 when she and Derek were approached by friends to adopt Reuben.

“In my view, adoption has a more positive and rewarding outcome than termination,” she said.

“Yes, he may be Downs, but he has undeniably shown us and others so much love, joy and happiness. He has taught us tolerance, empathy and kindness” Aggie said. She added that “much work needs to be done to eliminate the vast majority of genocide, discrimination, and mistreatment that people with Down syndrome face.”

The moving testimony concluded with Aggie thanking Reuben’s birth mother for “making a courageous and selfless decision to choose adoption as a living option.”

The New Zealand government is currently considering legislation that would remove abortion from the Crimes Act and place it within the health framework. The Bill passed its first reading in Parliament with a massive majority.

The proposed law would remove all abortion restrictions before 20 weeks and include only a vague test of maternal “well being” after that time with no time limit.

A report from the Abortion Legislation Committee to the House is expected by February 14, 2020. A second reading and vote will take place soon after.

Since 1974, when the first abortion facility opened, more than 500,000 abortions have taken place in the small nation.

In a statement before Saturday’s March, the organizers pointed out that New Zealanders love both women and their unborn children, and they want that law to reflect that love.