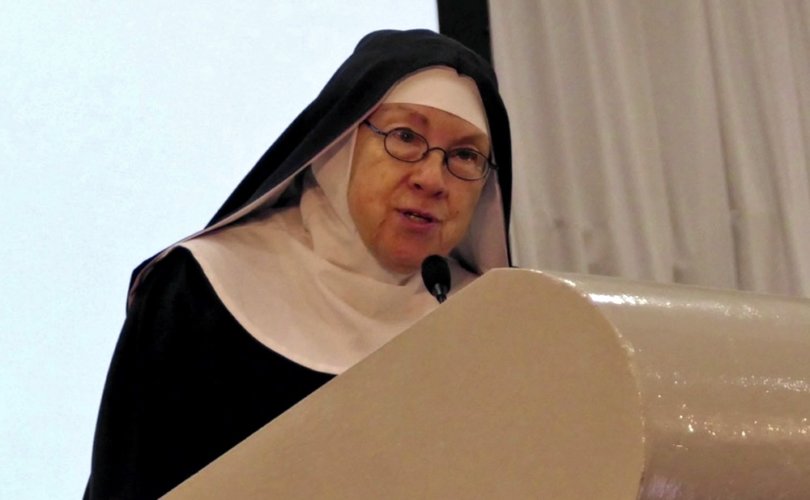 DUBLIN, Ireland, August 28, 2018 (LifeSiteNews) – Young people are leaving the Roman Catholic Church without even knowing what it means to be Catholic, and it's their parents' duty to teach them, says the founder of a new traditional-minded congregation of religious sisters.

“Children leave the Catholic faith – they think they're leaving the Catholic faith – but they never knew what it was,” said Mother Miriam, founder of the Daughters of Mary, Mother of Israel's Hope at the Conference of Catholic Families, an alternative conference to the Vatican-run World Meeting of Families (WMOF) held in Ireland last week.

Mother Miriam was adamant during her talk, titled Parenting In A World That Is Turned From God, that Catholic parents have a solemn duty to raise their children in the faith. Watch her entire talk below.

Citing the example of the mother and her seven sons who died rather than betray their faith in 2 Maccabees 7, Mother Miriam stressed the mother in the story would never have let a pagan society instill its false values in her sons.

“Every mother … who allows society to raise [her] children – even in the name of a Catholic school – is forfeiting [her] call and damning her children, unless that Catholic school is really Catholic,” she said.

“When people stand before God, it is not the church or the schools who will be held accountable,” she said. “It will be the parents … We must know what they have learned and absorbed before they go to bed at night.”

The lessons children need to learn do not all come from books but include what they can infer from the behavior of their parents, said the religious sister.

In his 1930 encyclical Casti Connubii (On Christian Marriage), Pope Pius explained that proper Catholic teaching within marriage is more than just instruction given by the Church.

“Something more is needed in addition to the education of the mind, namely a steadfast determination of the will, on the part of husband and wife, to observe the sacred laws of God and of nature in regard to marriage,” wrote Pope Pius XI in that encyclical.

“In fine, in spite of what others may wish to assert and spread abroad by word of mouth or in writing, let husband and wife resolve: to stand fast to the commandments of God in all things that matrimony demands; always to render to each other the assistance of mutual love; to preserve the honor of chastity; not to lay profane hands on the stable nature of the bond; to use the rights given them by marriage in a way that will be always Christian and sacred, more especially in the first years of wedlock, so that should there be need of continency afterwards, custom will have made it easier for each to preserve it,” he wrote.

Parents in Catholic marriages need to model chastity and modesty to their children, including in the way they dress, said Mother Miriam.

“Nothing will teach them more than the example you provide,” she said.

When it comes to attire, the religious sister was clear. Women should wear dresses that have neither low-cut necklines nor high hemlines – and nothing sleeveless. Catholic men, too, need to dress respectfully, she said.

“Men, nobody wants to sit next to you in church when you have shorts on and [sandals] and bare legs during mass,” she said. “Be respectful.”

For parents who have let their children live more according to the values of society than Catholic teaching – or whose children may be grown up and even senior citizens already – she offers this advice.