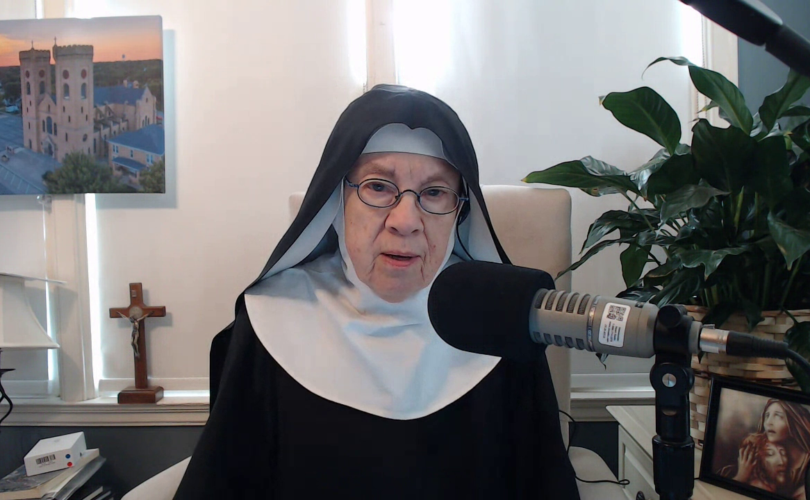 (LifeSiteNews) — A Catholic nun made an urgent appeal Friday to parents, asking them not to allow their children to receive the abortion-tainted COVID-19 vaccines.

Mother Miriam of the Lamb of God, O.S.B., spoke out in an explosive new episode of her daily show Mother Miriam Live. Her comments come as the Biden administration has revealed a proposed nationwide plan to inject 28 million kids as young as 5 years old with COVID jabs.

Mother Miriam urged parents to refuse the abortion-tainted and experimental “vaccine” at all costs, but especially when it comes to their children, as the government is preparing to enforce an “approval” of the jab for minors. She said that “you have no right to turn your children over to anyone especially to evil.”

The nun decried the jabs as an “experimental bio-weapon” that has been proven to give extreme side effects to children who have participated in trials. “Not one of them [vaccines] have been proven to do anything except to cause harm and kill you,” she stated.

In fact, a recent report from the Vaccine Adverse Event Reporting System (VAERS) showed that more than 21,000 adverse events, including 24 deaths, have been linked to children 12 to 17 years of age in the United States.

Mother Miriam described the campaign to vaccinate children as “100 percent diabolical” and appealed to parents. She added that if people choose to get the shot and “give it to your children, you are participating in evil that you think good will come. It will not. Death will come.”

Mother warned that “if your children take the vaccine, and they die from it now or eventually or have an adverse effect or effects, you are responsible.” She encouraged parents to take their kids out of any school system mandating jabs, and to “not allow your children to be the subject of these evil demons.”

Mother Miriam Live airs every day LIVE at 10 am EST on Facebook, and is hosted by The Station of the Cross Catholic Radio Network and LifeSiteNews. You can also view past episodes here, as well as on Rumble.