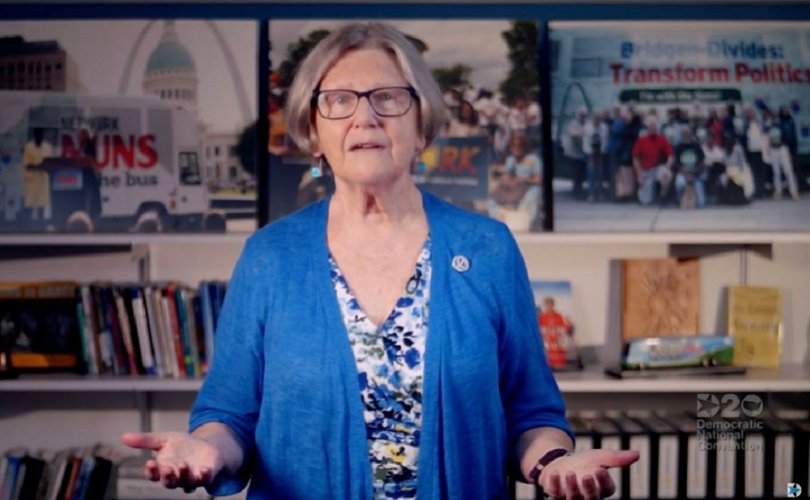 UNITED STATES, August 21, 2020, (LifeSiteNews) — A nun who led prayers at the recent Democratic National Convention along with pro-LGBT priest Fr. James Martin has told Catholic media that the question of whether abortion should be opposed is above her “pay grade.”

Catholic News Agency (CNA) reports that in response to being asked whether her organization opposes the legal protection of abortion, Sr. Simone Campbell responded: “That is not our issue. That is not it. It is above my pay grade.”

Sr. Simone, who is the executive director of the Network Lobby for Catholic Social Justice, led prayers at the political convention that mentioned caring for the earth; healing the planet; ending structural racism, bigotry, and sexism; and welcoming immigrants. She said nothing about the thousands of babies aborted every day in the U.S.

In 2016, Sr. Simone said a major pro-abortion leader’s account of her own abortion was “touching and compelling” and stated: “I don’t think it’s a good policy to outlaw abortion.”

CNA also reported that a review of the funding of the Network Lobby for Catholic Social Justice show that the lobby group has received a number of donations from pro-abortion groups.

“From 2012 to 2015 the Ford Foundation gave three grants totaling $350,000 to the Network Education Program to train faith leaders and to elevate their voices regarding ‘federal budget and tax debates and on policies affecting low- and middle-income populations,’” the news agency reported.

Cecile Richards, former president of Planned Parenthood Federation of America, has been on the Network’s Board of Trustees since 2010.

In October 2019, Bishop Joseph Strickland of Tyler, Texas denounced as “disgusting cooperation with evil” the news that the Ford Foundation was providing multi-million-dollar grants to key synod groups at the Vatican’s Amazon Synod in Rome.

CNA further reported that the Bauman Foundation, which has among its board members Jenny Lawson, the vice president of organizing and electoral campaigns at the Planned Parenthood Action Fund, has given grants of $20,000 to $50,000 to Sr. Simone’s organization in every fiscal year from 2008 through 2019.

When announcing the news of her delivering prayers at the DNC, the Associated Press described Sr. Simone as “a longtime Biden ally dating to the push to pass President Barack Obama’s health care plan.”

Sr. Simone confirmed her support for the Obama’s radically pro-abortion health care plan, which has caused years of legal diffculties for the Little Sisters of the Poor, a group of nuns dedicated to aiding the elderly, in an interview following the DNC.

Asked by interviewer Rev. Dr. C. Welton Gaddy how to begin conversations with Catholics “with very strong feelings about key moral issues which are informed by their faith,” Sr. Simone replied that she was calling on Catholics to be “Pope Francis voters” and to support the unborn through protecting Obama’s Affordable Care Act.

“One of the problems that’s hard on this issue, the moral issue of abortion, which is the one that is so rigidly held onto and it’s expressed in your attitude towards Roe v. Wade,” Simone said.

Democratic presidential candidate Joe Biden, who himself identifies as a Catholic despite supporting abortion “under any circumstance,” recently published two campaign videos highlighting his friendship with Pope Francis.

Last year, Biden told a PBS interviewer that Pope Francis gives him Communion after a Catholic priest followed Church law and denied him Communion because of his public support for abortion.