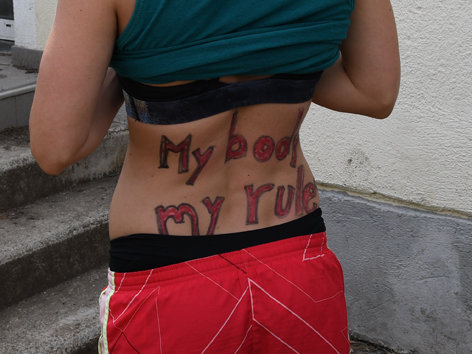 UPDATE FROM THE VATICAN (8:15 pm local time, June 22): According to the Vatican, the decision to cancel the game was not taken by the nuncio but by the entire Vatican Women’s soccer team. The nuncio then agreed.

Austrian news outlets ORF and Kathpress reported on Saturday that Spanish Archbishop Pedro Lopez Quintana, apostolic nuncio to Austria, withdrew the Vatican women’s team from the game after what was expected to be a friendly match turned to protest.

“Everything took off once the [Vatican] anthem began,” ORF reported. During the anthem, members of the Austrian team (Mariahilf) pulled up their jerseys, exposing images of female reproductive organs and pro-abortion slogans painted on their stomachs and backs.

Banners reading “Against Homophobia” were simultaneously rolled out in the spectator stands.

According to the Austrian news outlet, the protest was difficult to see from the VIP tent. An official from the Vatican team informed the Nuncio about the protest. According to ORF, “a visibly emotional conversation followed, and the Nuncio left the field with his colleagues.”

A friendly handshake followed between the teams, but there was no kick-off, Kathpress reported. Instead, players from both teams were summoned to the sidelines by coaches. The crowds were then informed via loudspeaker that the Vatican team would not be competing.

Luise H., representing the players involved in the protest, told ORF that the group didn’t know there would be consequences for their actions and would have liked to play the match.

Leaflets distributed to journalists explained that the activists could not identify with the Church’s rejection of abortion and same-sex marriage.

Regretting the cancellation, Luise H. told ORF that they “were not aware that the timing of the action, during the playing of the Vatican hymn and in the presence of the apostolic nuncio, could be detrimental to the idea of sport and ruin many working weeks of preparations.”

The Vatican launched the first women’s soccer team in its history in May 2019. Composed largely of Holy See employees and family members, it debuted in a match against AS Roma’s team on May 26.