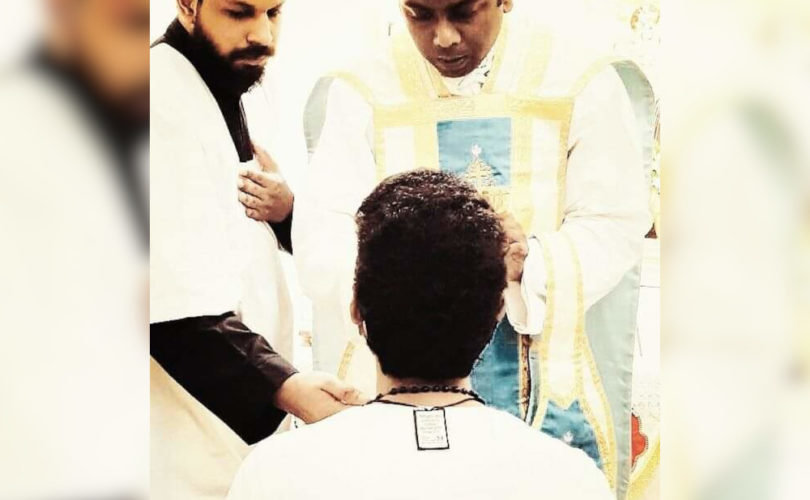 July 26, 2021 (LifeSiteNews) — A young man from India who was saved from an abortion by nuns working at the hospital is seeking to pursue his vocation by studying at Our Lady of Guadalupe Seminary in Nebraska, which is run by the traditional Catholic Priestly Fraternity of St. Peter (FSSP).

He now needs help to raise the necessary funds to answer the call and enter the seminary. Readers may consider helping him raise funds through this LifeFunder page.

Dominic Pavan, currently living in India, is filled with a desire to spread the joy and truth of the Gospel, recognizing that so many people need to come to know God.

His mother married young, but around 16 weeks into her pregnancy with Dominic, she began seeking to have an abortion. However, her local hospital was run by nuns who convinced her to wait several weeks. By the time she returned to the clinic, Dominic’s mother was past the legal limit for abortions in India.

She returned to the same hospital when giving birth, and the nuns placed Dominic in front of a statue of Our Lady soon after he was born, entrusting him to Mary with their prayers.

Raised in his very traditional Hindu family, Dominic would go to the temple “almost every day.” Yet around the age of five, he became fascinated by an image of the Sacred Heart in the Catholic school he attended, as well as a Marian shrine he visited on school trips.

Dominic recalled how he was very religious, but always particularly fascinated with Christ, eventually leading him to ask his grandmother for a Bible.

His family tolerated Dominic’s devotion to Christ, as long as it was coupled with Hindu devotions, but when he began to understand the exclusivity of God in the Christian faith, his family disapproved.

Becoming enamored with the Catholic faith and the directive to spread the Gospel, Dominic established multiple Facebook pages in order to share news about Christ and the teachings of the Bible.

Baptized at the age of 16, Dominic’s example and witness to the faith inspired his mother and maternal grandmother to be baptized and enter the Catholic Church, as well. He has committed himself to teaching people about Christ, noting that “I want to make Him known. There are so many people hungry for the truth.”

“There are people who are hungry for His love, they are so broken inside … People are so empty and they need Jesus, they need our Blessed Lord. They need the Church, they need the sacraments, and I want to give my life for this purpose.”

Dominic is looking to pursue his vocation by entering a seminary, and has been accepted to the FSSP’s seminary in Denton, Nebraska. The FSSP is a young Society of Apostolic Life devoted to the traditional liturgy of the Church, with around 150 seminarians in their two seminaries in the U.S. and Germany.

The seminary asks each seminarian to provide $8,300 up front, covering travel expenses, tuition for the first year, and a very limited amount of personal expenses.