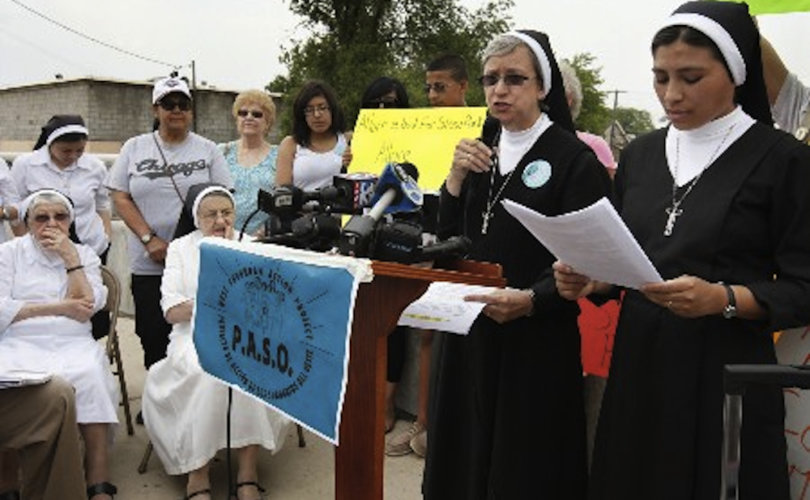 CHICAGO, Illinois, November 21, 2016 (LifeSiteNews) – After a two-year legal battle waged by the Missionary Sisters of St. Charles Borromeo, an unsavory neighbor’s strip and sex club near their convent outside Chicago was ordered to close its doors.

But Club Allure lawyer Robert Itzkow told the Chicago Sun-Times that the  owners will appeal to the state Liquor Control Commission and, if necessary, to the courts. In the meantime, Itzkow said the club plans to continue to operate, pending the result. But until an appeal is filed and a stay granted, the club is closed.

The order’s property in the Village of Melrose Park just west of Chicago houses a retirement home for 15 sisters in their 80s and 90s, a school for novices, a residence for working members, and three chapels that proved crucial to winning the case.

The convent lies just north of the Club Allure, which opened in 2013. It quickly brought noise and traffic until early in the morning and, as the complaint from sisters and residents alleges, “public violence, drunkenness, and litter including  empty whiskey and beer bottles, discarded contraceptive packages and products, and even used condoms evidencing illicit sexual misbehavior either in the club or about its environs, cigarette and cigar butts, used syringes, as well as loud and often unruly late-night pedestrian and vehicle traffic up and down their nearby residential streets and sidewalks.”

The sisters have received several hearings in different venues, with the Thomas More Society claiming violation of state ordinances intended to keep adult entertainment away from schools and churches, and liquor laws seeking to distance alcohol use from schools and churches. They had failed on technicalities, or in the case of a nuisance complaint against the club as a house of prostitution, because the complaint was too vaguely worded.

“We’re going to court again on that one,” said Tom Brejcha, the head of Thomas More Society, “but this time we’ll be more specific.” He promises to file the “Triple X” affidavits of several private investigators who were offered or provided with sexual services by Club Allure staff.

Brejcha says the club will argue that the prostitution complaint is moot because the local liquor commission just lifted its licence. “But they can’t have it both ways. They can’t appeal, reopen the club, and claim the issue is moot.”

The Thomas More Society advanced several arguments for shutting down the club — that it violated separate ordinances about selling liquor near a retirement home, a school and a church. The liquor commissioner ruled that the sisters’ retirement home did not qualify under the act because it did not “hold itself out” as such, and the school wasn’t a school because the novices took their academic instruction elsewhere.

But the commissioner decided that the three chapels were indeed churches under the liquor act, because Masses were celebrated there daily, the Eucharist was always reserved there, and the public was admitted.

However, the club lawyer said the commissioner’s way of measuring the distance between the convent and his club made no sense. “No thoughtful [judge] will uphold this decision. The mayor made a political decision because he just had another club open in town and he has an election in April. That’s all this is,” Itzkow said.

Brejcha told LifeSiteNews that he welcomes an appeal because it will allow him to re-argue the other reasons to close the club rejected by the liquor commissioner, who is also the mayor.