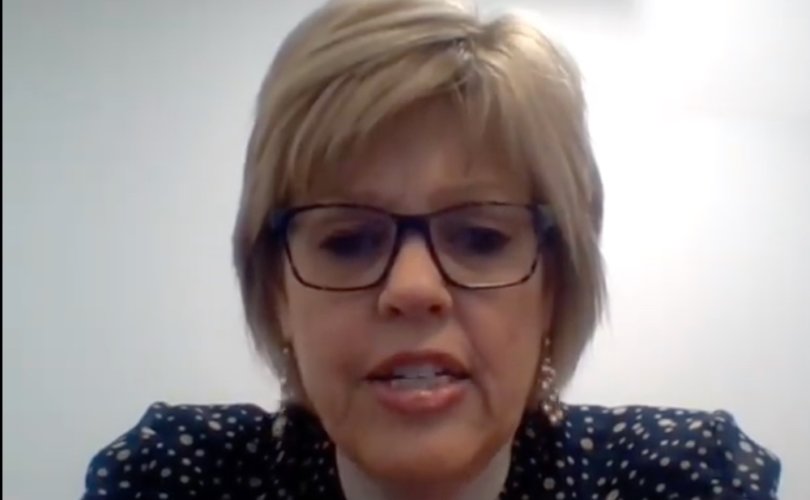 Jill Stanek, a nurse who became a pro-life advocate

“What is the difference between a baby who has just been born and a baby that’s still in the birth canal?” Stanek asked.

The controversy coincided with that of New York’s recent enshrining of abortion as a fundamental right in the state with its “Reproductive Health Act.”

The law feasibly invalidates any restriction on abortion and is also feared to be an open door to infanticide. Its passage was literally cheered and celebrated by pro-abortion lawmakers, led by Democrat New York Governor Andrew Cuomo, who’d championed it throughout the process.

Stanek discussed the fallout in a recent interview with LifeSiteNews, where she also recalled her experience of learning that the faith-based Chicago-area hospital where she worked in the late 1990’s was leaving children born from botched abortions to die.

It was while she was a registered nurse at Christ Hospital in Oak Lawn in 1999 that she discovered the hospital was involved in late-term abortions, Stanek recounted.

“Sometimes babies survived the abortion procedure,” she said, “and if they survived, they were allowed to die without any medical intervention whatsoever.”

When she witnessed a baby boy born alive after abortion being taken by a colleague to be left in the room where the hospital disposed of biohazard materials and dirty linens, it was a pivotal moment.

“One night a nursing coworker was taking a little abortion survivor to the soiled utility room to die, which is where they went,” said Stanek, “and when she told me what she was doing I couldn’t bare the thought of his dying alone, and so I rocked him for the 45 minutes that he lived.”

The boy was between 21 and 22 weeks old and he’d been aborted because he had Down syndrome, she recalled.

A pre-born diagnosis of Down syndrome results in parents aborting their children at a disturbingly high rate in the U.S. and across the world, in some cases around 100 percent of the time.

“He was about the size of my hand,” Stanek said. “I couldn’t tell if he was alive or not toward the end, unless I held him up against the light to see if I could see his heart beating through his chest wall, because their skin is so thin at that age.”

The pro-life advocate detailed how after the boy was pronounced dead, she’d folded his little arms across his chest and tied them together with a little string, wrapped him in a shroud, and took him to the morgue where hospital staff took all of their dead patients.

“And that was a life-changing event,” she stated.

Babies survived late-term abortions somewhere between one-third and one-fourth of the time in her experience, living anywhere from a few minutes to almost an eight-hour shift, in one case.

When they were aborted and they survived, they were offered to the parents to hold, said Stanek, and usually the parents didn’t want to hold them – or anything to do with them – and so then it was left up to the nurse.

“And if the nurse had time and compassion then she would hold the baby,” she said, “and if not then she would just take the baby to the soiled utility room to die.”

Stanek noted how Northam’s comments, Tran’s now-failed bill, and New York’s radical new abortion law have brought this issue to the forefront. She said that Northam’s description of how infant children born after failed abortion would be left to die was right on the mark.

“Northam meanwhile, said – and he’s a pediatric neurologist – he described it, it is infanticide,” Stanek said, “and that’s exactly what happens at Christ (Hospital).”

They provide what they call “comfort care,” she explained, but, “Sometimes the babies really don’t get comfort care; it’s just something that’s put in the charts, sometimes they were just laid out to die.”

“He (Northam) described exactly what I know was going on at Christ Hospital,” Stanek said. “And I knew he knew exactly what happened as he laid it out, because I’ve seen it.”

In 2000 Stanek was asked to testify before a U.S. House committee for the federal Born Alive Infants Protection Act (BAIPA). The Act, passed by Congress in 2002, specified that any baby who is completed expelled from his or her mother and shows any signs of life is to be regarded as a legal person by federal law, regardless of whether the child was born during an attempted abortion.

A nearly identical version of the federal bill had been brought before the Illinois Senate in the early 2000’s, where then-State Senator Barack Obama voted against the proposed law three times.

Republicans in the U.S. House and Senate are now trying to pass the Born-Alive Abortion Survivors Protection Act, legislation that would build on the existing law.

Down syndrome or other fetal anomalies aren’t the only reason children are aborted, Stanek pointed out.

“The whole system will abort for a wider range of reasons than just a fatally ill baby,” she said.

The pro-life activist conveyed that no matter a child’s age or medical condition, in or outside the womb, all human life is precious.

“A baby is just as precious and unique,” Stanek said, “made in the image of God, from the moment of conception.”