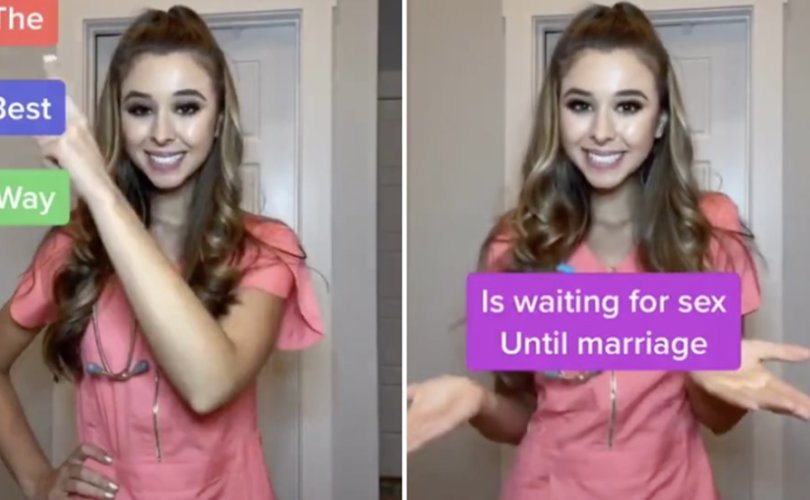 January 20, 2020 (LifeSiteNews) ― A nurse has been bullied online after her social media post went viral in which she stated that the “best way” to prevent sexually transmitted diseases (STDs) is to abstain from sex before marriage.

“Nurse Holly,” a health professional with 1.7 million followers on the social media platform TikTok, annoyed viewers, including other nurses, by appearing on screen with the commonsense message: “The best way to prevent STDs is waiting for sex until marriage. Just the truth.”

if i go to get tested and the nurse tell me i should have waited till marriage SOMEONE is getting knocked tf out pic.twitter.com/cVnNENVIBi

According to the Daily Wire, Nurse Holly was “inundated with scorn” by many of those who viewed it. She took down the video but not before someone copied it onto another platform. The original video became fodder for parody, as her critics made their own videos accusing her of shaming patients and violating nursing ethics.

Holly told BuzzFeed News that she deleted her video because of the backlash and apologized “for any offense that was taken.” She added that she only wanted “to promote positivity and healthy lifestyles.”

One of Holly’s detractors claimed on Twitter that she has studied with her.

“I went to nursing school with her,” tweeted “Krista,” a registered nurse (RN). “She’s actually a practicing RN. I saw these views and beliefs firsthand from her, many of my classmates, and even some of my professors,” Krista continued. “I completely regret going to a private Christian college for nursing school…very scary.”

Krista retweeted the message of another nurse who filmed a video response to Nurse Holly.

“So tired of nurses acting a fool on their large platforms,” tweeted “Sarah, RN.” “Promoting irresponsible and biased rhetoric regarding public health in an effort to go viral is so low and so so dangerous,” she continued. “Abstinence teaching does not equate to safe sex.”

“Sometimes science isn't politically correct, and I'm grateful for people such as Nurse Holly who acknowledge this and are more concerned with people's health than garnering social media approval,” he told LifeSiteNews.

“Contrary to what her critics are saying, STDs aren't prevented by the creation of safe spaces and the practice of being non-judgmental.”

Evert recalled reseacher Robert Rector’s remarks in The Washington Post: “The number-one determinant of whether a person will catch a sexually transmitted disease is the number of lifetime sexual partners. We seem to go out of our way as a government and a nation to avoid telling people that, but we hand out a lot of free condoms.”

The popular speaker, whose chastity-positive message recently led to a media backlash and cancellations in Ireland, observed that the most prevalent STD cannot be stopped by condoms.

“In fact, the most common sexually transmitted disease (HPV) has killed more women than AIDS, and the condom offers little protection from it,” said Evert.

“If we are concerned about the sexual health of Americans (45 percent of whom have HPV), it’s time to let the data speak for itself. Abstinence works 100 percent of the time.”