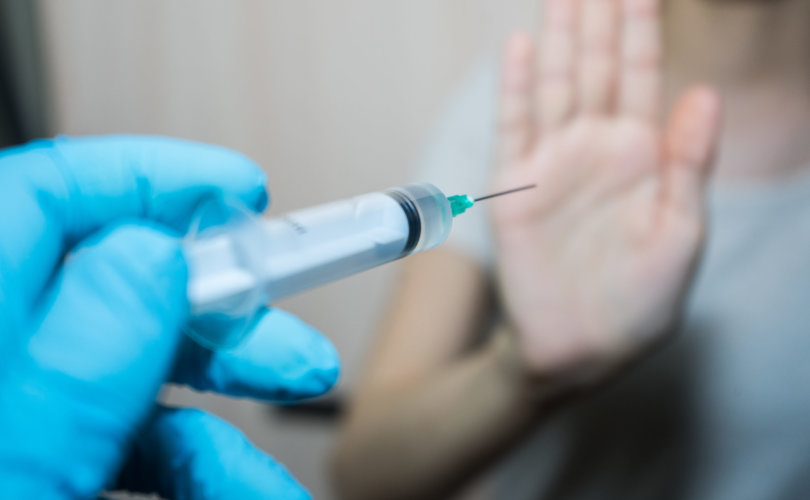 Officials at Rock Haven issued a memo on December 23 informing workers that reception of the vaccine was “a requirement for all staff” and those who did not comply would be laid off for failing to “perform the essential functions of the job.”

The memo went on to explain a laid-off employee “will not be allowed to return to work until they have completed the COVID-19 vaccine series.”

The initial session scheduled by the nursing home to conduct the first of a two-shot regimen was January 5. After declining to show up for the injection, registered nurse Terra Anderson was let go from her job.

In short order, she received a letter dated January 6 that informed her she had been laid off for her “inability to meet the essential functions of your job; failure to complete the Covid-19 vaccine as scheduled.”

A report from local Channel3000 indicated that “nearly a dozen” employees have been forced out of their jobs because of this policy.

Speaking to The Gazette under the condition of anonymity due to fears of retaliation, one employee said that though he or she is scheduled to receive the first dose of the Moderna regimen in February, they would like to refuse it. The employee also explained that 27 other workers at the nursing home this month had sent the county’s Health Services Committee letters explaining their objections to the vaccination mandate.

The concerns included how this biological agent, which was rushed through development and testing, may have dangerous, unknown long-term effects.

Others expressed worries about it effecting their pregnancy or fertility.

Michelle Lynch, a secretary at Rock Haven, reported that staff “are having side effects” from the first injection, “and they're being told, ‘Too bad,’” she said.

Letters to Rock County supervisors revealed that two employees reported suffering “high fevers and other side effects from getting the vaccine on Jan. 5.” In one case, “the side effects were so bad” the employee “had to go to the doctor and was advised not to get the second shot of the vaccine.”

According to reports, officials from Walgreens and CVS, the two main pharmacy chains conducting vaccinations, long-term care employees have been “much more reluctant than residents to get the vaccine.”

Estimates from the American Health Care Association (AHCA) is that around 50 percent of long-term care staff are declining the injections.

“We're having a real challenge with staff,” said Mark Parkinson, president and CEO of AHCA. “There's a lot of misinformation out there. There are rampant rumors spreading on social media that the vaccine can cause fertility problems, which has caused concerns among many of the young women that work in our facilities.”

Contrary to Parkinson’s characterization, the UK government issued a 10-page report late last year that warned these biological agents should not be used by pregnant or breast-feeding mothers. With regard to their impact on fertility, the report simply states it is “unknown whether COVID-19 mRNA Vaccine BNT162b2 has an impact on fertility.”

Therefore, according to the UK government, mandating young women receive these injections requires them to gamble with their fertility in order to keep their job.

Safety concerns with these biological agents also include “allergic” and “potentially fatal reactions,” that they may actually cause an increased vulnerability to the virus, and that, indeed, worries over long-term effects remain legitimate as these chemicals lack proper testing.

In addition, the U.S. Food and Drug Administration also drew up a document this fall listing the possible side-effects from a COVID-19 vaccine, including strokes, encephalitis, auto-immune disease, birth defects, Kawasaki disease, and death.

Current reports reveal that hundreds of individuals injected with these chemicals have been admitted to the hospital, and the shots have so far been linked to at least 55 deaths in the United States.

With regard to the elderly, a report on one nursing home in Auburn, New York, asserts that they had no coronavirus deaths at the facility at all until seven days after they began administering the vaccine. In a period of less than two weeks, beginning December 29, the “24 coronavirus-infected residents at the 300-bed nursing home” had died.

Earlier this month, the Norwegian Medicines Agency reported that 23 people died within days of receiving the first dose of the Pfizer COVID-19 vaccine, 13 of whom were nursing home patients.

As a result, health experts from China called for Norway and other countries to suspend the use of mRNA vaccines, as currently produced by Moderna and Pfizer, especially among the elderly.

In response to the outcry from Rock Haven employees, several county board members indicated they plan to challenge the policy during their board meeting on January 28.

“I think we’re going to have to look at this real hard at the next county board meeting,” said Supervisor Brian Knudson, who also chairs Rock County’s Human Services Board. “I don’t think it’s fair to proceed laying off people. That’s not right.”

County Chairman Rich Bostwick said if the rule is challenged, a new rule could be passed in its place with a simple majority agreement from county supervisors.

In anticipation of this moral question, Dr. Joseph Meaney, president of the National Catholic Bioethics Center, affirmed in July that informed consent is not even possible for the new biological agents since long-term effects remain unknown due to the lack of extended testing. Thus, any use of coercion of persons to take such a vaccine, including making it a requirement for employment, remains “ethically unacceptable.”