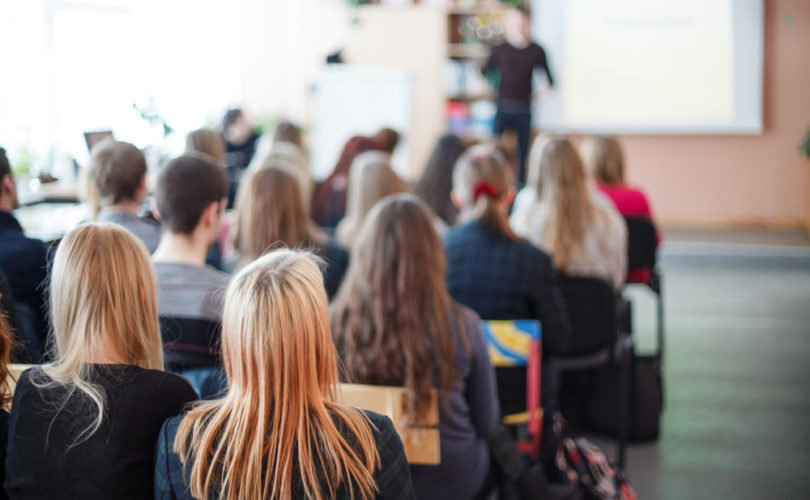 LONDON, April 7, 2015 (LifeSiteNews.com) – The British government must “make it compulsory that all schools’ sex education policies include a positive portrayal of same-sex relationships,” the UK's National Union of Teachers (NUT) decided at its annual conference on Sunday.

Christine Blower, General Secretary of the union, said that “NUT is at the forefront in the campaign for equality of opportunity and fair treatment for all students and staff, regardless of gender identity or sexual orientation,” and that all political parties contending in the May election should adopt the union's motion.

“The NUT calls for all parties standing in the 2015 General Election to show their commitment to tackling the discrimination faced by both LGBT students and teachers in schools by following the 10-point action plan outlined in the motion. This includes making it compulsory for all schools’ sex education policies to include a positive portrayal of same sex relationships, promoting LGBT History Month in all schools, and encouraging schools to develop a curriculum that is inclusive of LGBT issues,” Blower said.

The proposals in the motion also called encouraging transgender students – and teachers and staff – “while transitioning” from one sex to another “and after.”

“We need education policy that develops curriculum for children and young people that supports the democratic values of a diverse Britain – including LGBT equality,” Blower said.

“Future governments must tackle the embedded homophobia, biphobia, and transphobia that exist in some schools,” Blower added. “Lesbians, gay men, bisexual and transgender people are all part of their local school communities as teachers, support staff, students, parents, and governors.”

Critics of the teacher's union agenda have slammed the proposals as intolerant of those who reject the idea that homosexuality or gender identity disorder should be praised, with one opponent charging that the union's scheme amounts to “thought control.”

Simon Calvert, the Christian Institute’s deputy director for public affairs, said, “This motion is itself an act of intolerance towards mainstream Christians and their beliefs.”

“I wonder whether Christian members of the NUT who have paid their dues can expect any help from the NUT when their jobs are on the line,” he said in a news release.

“This kind of policy is dangerous for our children who are being oversexualized at a very young age. They are being introduced to concepts and having normalized sex relationships which robs them of their innocence and is not good for their emotional and moral wellbeing,” Williams said.

Chris McGovern, the chairman of Campaign for Real Education, a group that advocates for parents' rights and improvement in educational standards, said the teacher's union is engaging in propaganda.

“The rights of groups who oppose gay marriage on sincere religious grounds should be respected as much as those who support gay marriage. Thought control should not be promoted by the NUT,” McGovern said.

While NUT is calling for homosexual indoctrination for children in all schools, faith-based schools in the UK are already being targeted for not “actively promoting British values,” which includes teaching tolerance of homosexuality, or face being shut down.

Last fall Education Secretary Nicky Morgan announced that faith-based schools are required to conform to the Equality Act. The new rules introduced by the Department of Education gave inspectors from the Office for Standards in Education (Ofsted) power to downgrade the ratings of, or even close, schools that do not comply.

The new measures were invoked in response to the so-called Birmingham Trojan Horse plots, in which radical Islamists reportedly attempted to take over state schools in order to indoctrinate children into radical Islamist ideologies.

Christian and Jewish groups were outraged that their schools were suspected of “indoctrinating or alienating” children by teaching them traditional ethics and morality.

Antonia Tully, national coordinator of Safe at School, a parents' rights campaign of the Society for the Protection of Unborn Children (SPUC), called Morgan's announcement an “attack on every parent in the country.”

“It's quite clear that the new rules for schools actively to promote so-called 'British values' are all about indoctrinating children with a homosexual ideology. The prospect that schools will have to champion homosexuality or risk being downgraded by Ofsted strips all parents of their right to educate their own children about sexual morality,” Tully said.