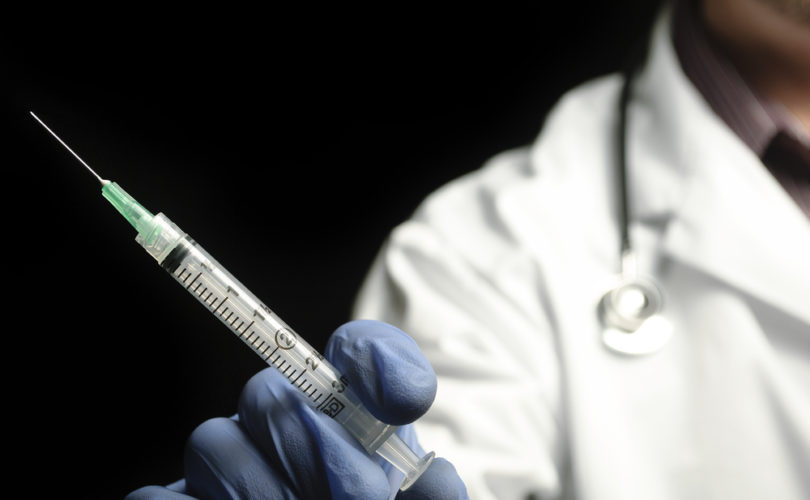 NEW YORK, September 3, 2015 (LifeSiteNews) – An Orthodox Christian woman has won the right to refuse a vaccine developed using aborted babies' tissue, based on her religious beliefs.

The vaccine is for measles/mumps/rubella and is required by New York City law for all schoolchildren. It was developed from fetal tissue procured from abortions, hence the moral dilemma for practicing Christians.

The woman, who remains anonymous, said her Christian beliefs against abortion compel her to have nothing to do with vaccines made using aborted fetal tissue.

“Abortion is clearly a mortal sin and is [an] abhorrent act to any Christian,” the New York mom said in her petition for exemption, according to the New York Post. “The vaccine manufacturers' use of aborted fetal cells in its products and research means that I cannot associate with them or support them financially (by buying their products), for such support would make me complicit to their sin.”

Other early Church documents condemning abortion include the Didache, the Epistle of Barnabas, the Epistle to Diognetus, the Apocalypse of Peter, St. Athenagoras's writings, the letters of St. Clement of Alexandria, the Apostolic Constitutions, Tertullian, Hippolytus's Apostolic Traditions. Additionally, every early Church council says likewise.

Every ancient Christian leader unequivocally wrote that abortion, without exception, is against Christian belief and practice. Those who wrote extensively on the topic include St. Basil the Great, St. John Chrysostom, St. Jerome, St. Ambrose of Milan, St. Gregory of Nyssa, St. Augustine, St. John the Faster, and the sixth worldwide Great Ecumenical Council (691).

This conviction continues to the present day. The Congress of the Greek Archdiocese of North and South America stated, “The Orthodox Church has a definite, formal, and intended attitude toward abortion. It condemns all procedures purporting to abort the embryo or fetus, whether by surgical or medical means. The Orthodox Church brands abortion as murder, that is, the premeditated termination of the life of a human being.  Decisions of the Supreme Court and state legislatures by which abortion is allowed, with or without restrictions, should be viewed by practicing Christians as an affront to their beliefs in the sanctity of life.”

Thus, New York admitted that the woman's beliefs were in line with her religion.  Nevertheless, pro-abortionists say the First Amendment's assurance of the free exercise of religion should not include parents choosing whether to vaccinate their children.

Pro-abortionists sharply criticized the decision. “If we allow people to opt-out of vaccination, it puts other people's children at risk,” says Sharon Levin of the pro-abortion National Women's Law Center.  “I think this decision is just one can in a crate of a can of worms that have been opened since the Hobby Lobby decision.”

Levin was referring to Hobby Lobby's legal attempt to opt out of Obamacare's mandatory abortion/sterilization/contraception coverage, which violated the family-owned and operated corporation's religious convictions.