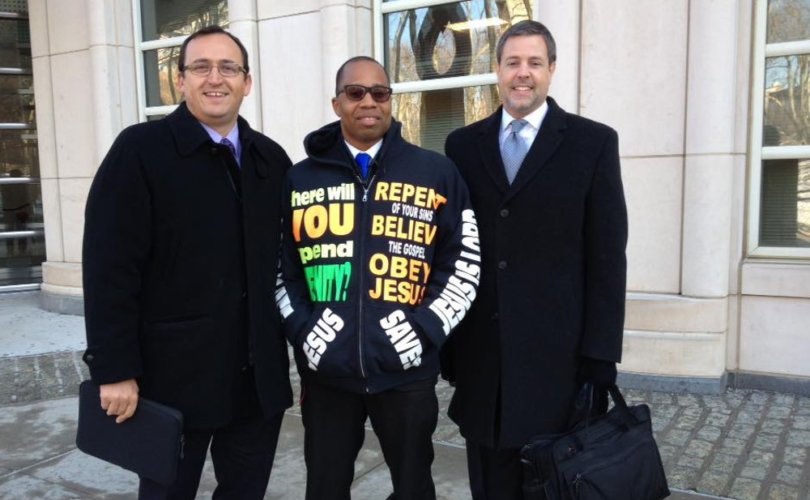 The unanimous decision from a three-judge panel affirmed the decision of a district court which had issued an opinion favorable to the pro-lifers in 2018.

“This is a great victory,” said Mat Staver, founder and chairman of the Liberty Counsel, a Florida-based legal organization which represented one of the defendants in the case.

Liberty Counsel has successfully argued many religious liberty cases, notably winning a significant case in California earlier this year against Democrat Governor Gavin Newsom. Under the settlement, the governor may not impose any more COVID restrictions upon churches and other houses of worship in the state, and must pay $1,350,000 to Liberty Counsel to reimburse attorney fees and costs.

Remarking on the recent win in New York defending the 13 pro-life activists, Staver said Liberty Counsel is “pleased that the Second Circuit Court of Appeals reversed its prior opinion and reinstated the district court’s well-reasoned opinion that thwarted the attorney general’s attempt to censor our client.”

Court Reverses Itself in Favor of NY Pro-Life Defendants
“This a great victory. We are pleased that the Second Circuit reversed its prior opinion and reinstated the district court’s well-reasoned opinion.”https://t.co/S3rLhhMc7v pic.twitter.com/YXoNCQaOos

Calling the legal action against the defendants “politically-motivated and patently frivolous,” he added that his client “did nothing wrong by exercising his First Amendment right to preach the gospel on a public sidewalk.”

The opinion of the federal court affirmed a New York district court’s 2018 denial of a preliminary injunction which had been sought the prior year by New York’s then-Attorney General Eric Schneiderman.

In backing the original district court’s decision, the federal appeals court did “not specifically affirm or question the array of evidentiary and factual findings made by the district court,“ but nonetheless upheld “the denial of the Attorney General’s motion for a preliminary injunction.”

The decision marks a victory for the pro-life defendants and all who attempt to counsel women and save the lives of unborn babies by protesting and praying in front of abortion facilities.

The legal action in the New York case began in June 2017, when the 13 pro-lifers were sued by New York AG Schneiderman, who sought to create a buffer zone preventing anti-abortion activists from coming within 16 feet of the Choices Women’s Medical Center abortion facility in the Queens borough of New York City.

“Schneiderman intended to silence the pro-life and Christian messages he openly despised,” Liberty Council explained in a statement.

Schneiderman held a press conference to announce the launch of his lawsuit against the pro-life activists, in which he affirmed his own pro-abortion stance and said the Christians protesting the murder of children had “run their mouths” with “unlawful, un-American rhetoric.”

Pro-life activists have been meeting in front of the Queens, New York abortion facility since 2012, where they have prayed, counseled women against killing their babies, and held up signs depicting the horrors of infanticide via legal abortion.

A year later Schneiderman – who had used his authority to take legal action against former film producer and convicted sex offender Harvey Weinstein – stepped down from his position after four women accused him of committing physical violence against them.

In July 2018, U.S. District Judge Carol Bagley Amon denied Schneiderman’s 2017 request, saying that while she was not suggesting that people who escorted pregnant mothers to the abortion facility “intentionally lied at the hearing,” she nevertheless found “much of their testimony is unreliable,” the radically pro-abortion Rewire.News reported.

Judge Amon said the protester activity logs which had been kept by clinic volunteers and staff were “hearsay,” “biased,” and “unreliable.”

The Bush-appointed judge further found the protesters did not “harass, annoy, or alarm” anybody during their protests.

However, Judge Amon’s decision favoring the pro-lifers was upended by New York’s new Attorney General, Leticia James, who appealed to the Second Circuit Court for a reversal.

In response to James’s appeal for a judicial opinion against the pro-life activists, a divided panel on the Circuit Court agreed, reversing Judge Amon’s 2018 decision.

The move was immediately met with new motions from the pro-lifers asking the court to reconsider.

Last week, the motions filed by the pro-lifers were granted, and the court issued a 3-0 opinion in their favor.

A radical pro-abortion politician, James became attorney general in 2019. Earlier this year she called on the federal government to make sure women had easy access to at-home abortions during the coronavirus lockdowns.

“While any woman who wants to go into a doctor’s office or into a clinic today and get an abortion should continue to be able to do so, control over one’s reproductive freedom should not be limited to those able to leave their homes as we battle the coronavirus,” she claimed.

James, whose position makes her the chief law enforcement officer in the state of New York, added that the government should ensure that “no woman is forced to risk her health while exercising her constitutional right [sic] to an abortion.”