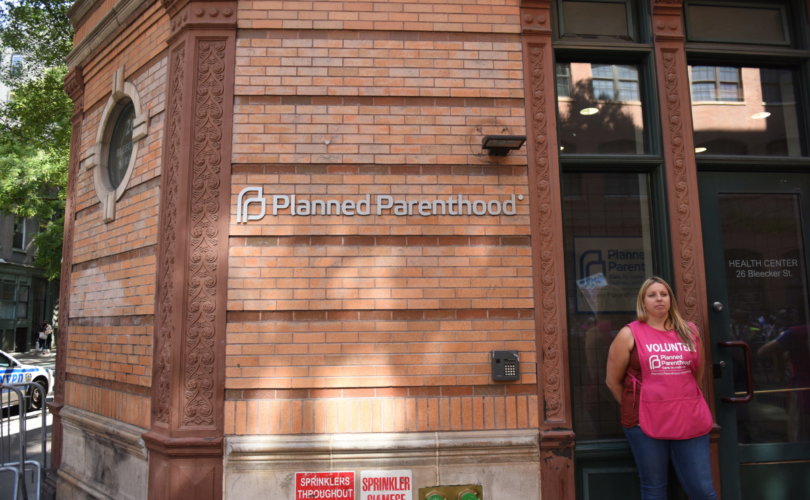 NEW YORK, July 21, 2020 (LifeSiteNews) — Planned Parenthood says it is scrubbing the name of its eugenicist founder Margaret Sanger from its high-volume Manhattan abortion center in the wake of a scandal over employees’ allegations that the abortion giant is racist.

Planned Parenthood of Greater New York announced Tuesday that it is removing Sanger’s name from its flagship Bleecker Street abortion center because of her “harmful connections to the eugenics movement,” The New York Times reported.

Planned Parenthood is also talking to the city about removing Sanger’s name from over a 20-year-old street sign that hangs near its Bleecker Street office, the newspaper noted.

“The removal of Margaret Sanger’s name from our building is both a necessary and overdue step to reckon with our legacy and acknowledge Planned Parenthood’s contributions to historical reproductive harm within communities of color,” Karen Seltzer, the chair of the New York affiliate’s board, said in a statement.

The Margaret Sanger Planned Parenthood abortion facility, which will now be called the Manhattan Health Center, “is known for causing a large number of life-threatening medical emergencies that required ambulance transport to a local hospital,” according to Operation Rescue.

The Planned Parenthood Federation of America, which has defended Sanger in the past, said in a statement that it supported the New York chapter’s decision to strike her name from the abortion center, the Times reported.

The pro-life movement has been pointing out for years that Sanger was a racist eugenicist whose goal was to use contraception and sterilization programs to reduce the population of races and ethnicities she deemed inferior.

Notably, a pro-life black woman told attendees at a Black Lives Matters rally that Planned Parenthood is the “number one killer of the black population” and asked: “Why don’t I see my brothers and my sisters outside Planned Parenthood?”

According to Students for Life Action’s “Strike Out Sanger” Campaign: “Seventy-nine percent of today’s Planned Parenthood facilities are located in minority and low-income areas; 20 million black babies have been aborted since the tragic Roe v. Wade decision; black babies in New York City are more likely to be aborted than born alive; and according to the CDC, nearly 36 percent of all abortions were committed on black babies despite the fact that African-Americans only make up 13 percent of the total population.”

That was followed the next day by a letter from employees of the Kansas-based Planned Parenthood Great Plains, where McQuade served as CEO from 2010 to 2017, alleging systemic racism throughout the entire Planned Parenthood abortion conglomerate, it reported.

Merle McGee, the New York chapter’s chief equity and engagement officer, told The New York Times that there was no connection between McQuade’s ouster and the decision to remove Sanger’s name.

Rather, the decision to disavow Sanger came out of a three-year effort to combat internal racism and improve relations with groups led by black women who were suspect of Planned Parenthood’s beginnings. There is one black, two Asians and two Hispanics on the New York affiliate’s 22-member board, the Times reported.

“The biggest concern with Margaret Sanger is her public support for the eugenics medical philosophy which was rooted in racism, ableism and classism,” McGee said.

Pro-life leaders had mixed responses to the decision.

Rev. Patrick Mahoney, chief strategy officer for the Washington-based Stanton Public Policy Center, described it as a “big admission” that could potentially lead to Planned Parenthood losing its public funding.

“Planned Parenthood as an organization has admitted that Margaret Sanger is a eugenicist and racist, and that that’s a negative thing,” he told LifeSiteNews.

“So this is really extremely monumental because it isn’t just the pro-life community who is saying that Margaret Sanger and the practice of Planned Parenthood are racist in its foundation, the organization has said it,” Mahoney said.

“With the national conversation in America very focused on the issue of racial injustice, the larger issue now becomes, how can we as a nation give hundreds of millions of dollars to an organization that was founded by a racist, and its racist policies still continue?”

“We’re going to continue to press Congress and the President: how can we fund this organization?” he said.

That was echoed by Stanton founder and CEO Brandi Swindell, who said her organization is also continuing to call for the removal of a display honoring Margaret Sanger from the National Portrait Gallery in Washington, D.C.

Troy Newman, president of Operation Rescue, whose group has documented 34 life-threatening medical emergencies at the Margaret Sanger Planned Parenthood, described the move as a “hollow gesture that doesn’t begin to make up for over 100 years of racism and harm.”

“If Planned Parenthood truly wanted to help women, it would stop aborting all babies, including the babies of Blacks and other minorities, which it continues to disproportionately target for depopulation through abortion,” he said.

Abby Johnson, former Planned Parenthood abortion clinic director turned pro-life, said the decision was a “good start” but that Sanger’s philosophy remains at the core of the abortion giant.

“In a rare moment of introspection, and quite shockingly honest, Planned Parenthood of NY has made the right decision to remove their founder's name from their building. Margaret Sanger is a known eugenicist whose legacy is built on racism,” Johnson said in a press statement.

“Even though Planned Parenthood is moving to separate themselves from Sanger’s name, her influence on the abortion giant remains at its core, including their annual Maggie Awards named after her,” added Johnson, who runs an organization that helps people leave the abortion business.

“Horrifyingly, New York aborts more black babies than are born alive, an almost incomprehensible statistic and one that Planned Parenthood plays an integral role in,” she added.

As for Students for Life Action “Strike Out Sanger” campaign, it has three goals: rename Margaret Sanger Square in New York City; remove Sanger’s sculpture in the Smithsonian’s National Portrait Gallery, and topple the Sanger statue at the Old South Meeting House on Boston’s Freedom Trail.