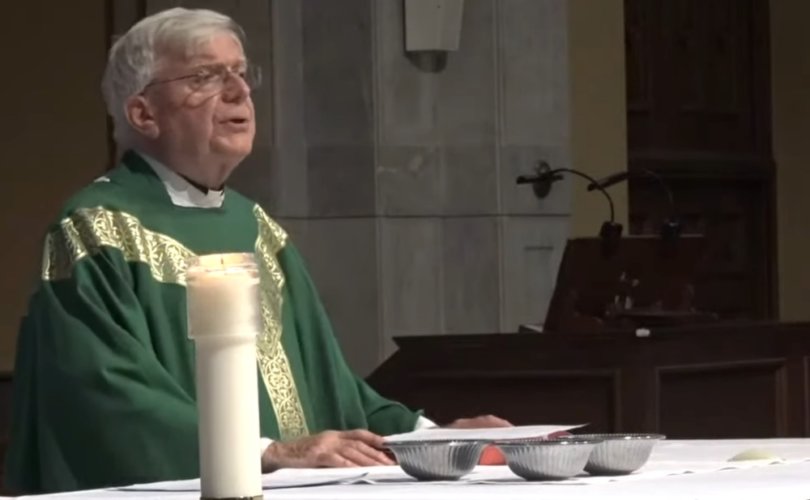 NEW YORK, New York, September 2, 2020 (LifeSiteNews) – A Jesuit priest in New York City last Sunday led his congregation in a “prayer for racial justice,” accepting the controversial concept of “white privilege” as a reality. He asked the faithful if they were willing to “transform our Church culture.”

Fr. Kenneth Boller S.J., the local pastor at St. Francis Xavier Catholic Church, had photos of Ahmaud Arbery, Breonna Taylor and George Floyd – black people killed in recent months – on display at what appeared to be a side altar.

“I now invite you to stand, and join us in the prayer for racial justice, by responding ‘yes’ to each of the following statements,” Boller began after the reception of Holy Communion, and before the final blessing. Watch video here starting at minute 54:09.

He then asked his congregation a series of questions, disguised as a prayer that did not mention God or Jesus Christ. After each question, the faithful responded with “yes.”

A few questions later, “white privilege” came up again. “Therefore, from this day forward, will you strive to understand more deeply the injustice and suffering white privilege and white supremacy cause?” he asked. The questions begin at minute 54:09 in the video below.

The Washington Post, already in 2016, had defined “white privilege” as “the level of societal advantage that comes with being seen as the norm in America, automatically conferred irrespective of wealth, gender or other factors. It makes life smoother, but it’s something you would barely notice unless it were suddenly taken away – or unless it had never applied to you in the first place.”

Ever since the death of George Floyd in May during an arrest, the concept of “white privilege” has been referenced more frequently, especially by liberals, including many celebrities.

Most recently, singer and former Disney Channel star Demi Lovato, wrote, “So here I am, sitting in a home that I was able to afford with the money that I have from singing, while people of color are fearing for their lives every day. I realized this was a lightning bolt jolting through my body, where I was reminded of my privilege. I felt an overwhelming responsibility to help spread awareness about this injustice, so I began posting things that I thought would educate people.”

In response to the Black Lives Matter moment, Lovato at first was unsure how to show her support. “All I knew was that I hated that I shared the same skin color as the people accused of committing heinous crimes against Ahmaud Arbery, Breonna Taylor, George Floyd and many, many other Black lives,” she added.

Kenan Malik, writing for the liberal newspaper The Guardian, was more nuanced about “white privilege” than others.

“The stress on ‘white privilege’ turns a social issue into a matter of personal and group psychology,” he explained. “Viewing white people – all white people – as ‘guilty and complicit’ distorts political issues and deflects from real causes.”

Conservative commentator Dennis Prager, however, had argued in 2016 that “no reasonable person can argue that white privilege applies to the great majority of whites, let alone to all whites. There are simply too many variables other than race that determine individual success in America.”

As one example, Prager said that “Two-Parent Privilege” is a far more tangible privilege than “white privilege.” He explained that somebody “raised by a father and mother, you enter adulthood with more privileges than anyone else in American society, irrespective of race, ethnicity, or sex. That’s why the poverty rate among two-parent black families is only 7 percent,” compared to “a 22 percent poverty rate among whites in single-parent homes.”

Fr. Boller, during his “prayer for racial justice,” also asked, “Do you support racial equity justice and liberation for every person? Do you affirm the inherent worth and dignity of every person?”

The Catholic Church has always affirmed the dignity of every human being, from conception until natural death. Indeed, the Catechism of the Catholic Church affirms that each person’s dignity “is rooted in his creation in the image and likeness of God” and “fulfilled in his vocation to divine beatitude.”

Nonetheless, Boller asked, “Will you commit to help transform our Church culture to one that is actively engaged in seeking racial justice and equity for all, for everyone?”

“Will you make a greater effort to treat all people with the same respect you expect to receive?” he added. “Will you commit to developing the courage to live your beliefs and values of racial justice and equality? Will you strive to eliminate racial prejudice from your thoughts and actions so that you can better promote the racial justice efforts of our Church? Will you renew and honor this pledge daily knowing that our Church and our community, our nation, and our world will be better places because of our efforts?”