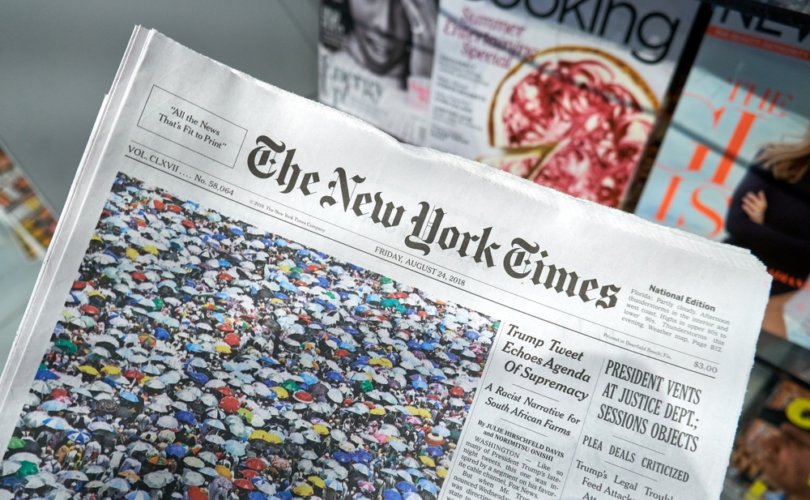 (LifeSiteNews) — The New York Times issued a lengthy correction on October 7 after an article the day before had several mistakes, including overstating the number of kids hospitalized with COVID.

“An earlier version of this article incorrectly described actions taken by regulators in Sweden and Denmark. They have halted use of the Moderna vaccine in children; they have not begun offering single doses,” the correction said.

“The article also misstated the number of hospitalizations in U.S. children. It is more than 63,000 from August 2020 to October 2021, not 900,000 since the beginning of the pandemic,” the correction said. “In addition, the article misstated the timing of an F.D.A meeting on authorization of the Pfizer-BioNTech vaccine for children. It is later this month, not next week.”

Apoorva Mandavilli, who writes in her bio that she won an award in 2019 for “Excellence in Medical Science Reporting,” has yet to post any comments on her Twitter page explaining what happened or how she made the mistakes.

Mandavilli previously called the “lab leak theory,” the thesis that COVID-19 came from the Wuhan Institute of Virology, a “racist” idea.

“Someday we will stop talking about the lab leak theory and maybe even admit its racist roots. But alas, that day is not yet here,” Mandavilli said in a May tweet, The Post Millennial reported.

The Lancet, which published a letter denouncing the theory early during the outbreak of COVID, has had to walk back its statements. Facebook also retracted its policy of censoring content that said COVID came from the Wuhan lab.

The October 7 correction highlights the issues raised by Swedish and Danish health officials when it comes to administering COVID shots to kids.

Both countries paused the use of the Moderna jabs for young adults and children.

“The Swedish health agency said it would pause using the shot for people born in 1991 and later as data pointed to an increase of myocarditis and pericarditis among youths and young adults that had been vaccinated,” Reuters reported.

The Danish Health Authority said it will not give the Moderna jabs to anyone younger than 18 years old.

A Moderna spokesperson told Reuters that the cases are heart inflammation and not of concern.

“These are typically mild cases and individuals tend to recover within a short time following standard treatment and rest,” a spokesperson told Reuters. “The risk of myocarditis is substantially increased for those who contract COVID-19, and vaccination is the best way to protect against this.”

But other medical professionals have said the COVID shots can be more dangerous, particularly for people younger than 40 years old, compared with the risk of adverse reactions from the virus itself.

Dr. Doran Fink, a deputy vaccine adviser for the Food and Drug Administration (FDA), told a jab safety panel last month that myocarditis from the shots pose a greater risk for young adults than COVID-19.

“The chances of dying from COVID is about .003% for people under the age of 24 in Canada,” Canadian neurologist Steven Pelech said in August.

However, the shots are more dangerous. Furthermore, the effects of heart inflammation can last for years, leading to problems such as increased risk of heart attack.

“For example, myocarditis. Inflammation in the heart. Contrary to what a number of people have said, there is no such thing as ‘mild myocarditis,’” Pelech said, according to the Western Standard.