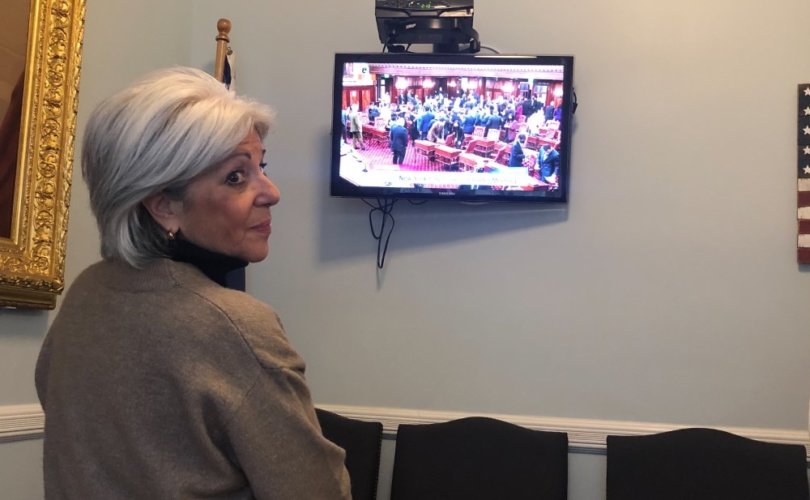 Vickie Paladino’s son and Chief Political Advisor, Thomas Paladino, told LifeSiteNews that she was forced to vote “remotely” for the day’s charter session: “By remotely, I mean one room over from the City Council Chamber. They wanted to make the point of not allowing us onto the floor of the chamber because of our refusal to disclose her vaccination status.”

Vickie Paladino, who represents several neighborhoods in Queens, is the only member of the 51-person NYC Council who has refused to provide proof of vaccination.

A directive expressly requiring this of NYC Council members was sent Nov. 8, not long before Vickie was elected. It announced, “Beginning November 15, 2021, no one who works at the Council will be permitted to work at City Hall and/or 250 Broadway offices, or at any Council Member district office, if they have not provided the required proof of vaccination.”

When asked why his mother believes it’s important to refuse to comply with this city government requirement, Thomas Paladino told LifeSiteNews:

“If we don’t, who will? We were elected for a reason. We made our opposition to the mandate a cornerstone of our campaign. And we won. And we owe it to our district, to our supporters, and to our entire city to press this for the benefit of everyone.”

In fact, President of Personhood New York Dawn Eskew shared with LifeSiteNews that during Vickie’s race for New York City Council, “many NYC teachers, NYPD, & NYFD (firemen)” who lost their jobs “asked for her help,” as New York City was one the first major cities in the United States to require proof of injection or COVID-19 tests for all government workers, before expanding that requirement to all private sector employees performing in-person work.

Under de Blasio, the city has had a reputation for some of the strictest COVID-19 mandates in the country, and Eric Adams, who was sworn in as New York City mayor on January 1, 2022, has already announced his intention to continue De Blasio’s vaccine mandates encompassing both private and public employees.

Vickie has denounced New York’s vaccine mandates since their inception. “Like tens of thousands of fellow New Yorkers, I believe the mandates are counterproductive and crippling to our economy and deeply divisive socially,” she told the New York Post in late November.

“This is about the people in general, and what the mandates do to our ability to live our lives and work and function as normal, free human beings in the United States of America,” Thomas told LifeSiteNews. “That is being denied to everybody, from people who work as a waiter in a restaurant, all the way up to people who are elected representatives on a major City Council.”

He told LifeSiteNews that while “out of respect for the speaker’s nomination,” they decided not to immediately push for Paladino’s access to the chamber floor, his mother “cannot make any promise moving forward.”

“This is going to continue to be an ongoing issue because essentially they are denying an elected representative access to the primary chamber where the business of government is conducted. It’s an issue that we’re going to press with them.”

A brush with de Blasio: Vickie Paladino’s launch to fame

Vickie attracted attention in 2017 for publicly berating de Blasio to his face as he visited her longtime Queens neighborhood, Whitestone, to announce that $16 million in city funding would be allocated to leveling sidewalks damaged by tree roots.

De Blasio had just received much public reproach for leaving for Germany earlier that month to join protests against the G20 Summit, only a day after a New York City police officer was ambushed and killed in the Bronx. The German protest De Blasio attended was titled “G20: Welcome to Hell,” and shared the slogan, “Borderless solidarity instead of nationalism.”

The incident catapulted Vickie into the public eye. Nicole Malliotakis, a Republican U.S. representative who ran against de Blasio in New York City’s 2017 mayoral race, shared the video in which Vickie explained the outrage against de Blasio that fueled her confrontation. Malliotakis met with Paladino a day later.

Thomas recounted to LifeSiteNews that his mother “was getting phone calls from random people all across the city thanking her, from cops, from firemen, from people all over the city. And she returned every phone call, every email, hundreds and hundreds of people.”

“So she deserves a lot of credit for really putting the work in the right way …and she didn’t do it because she wanted to run for office, she just did it because that’s just how she is.” Thomas explained that following this burst of publicity, “[s]he was approached by a couple of [political] consultants, and she took the bull by the horns and that was it.” She thereafter ran for New York State Senate in 2018.

From the beginning of her run for New York City Council, Vickie has highlighted her priorities of public safety as well as the ability of businesses to freely operate and thrive, and of the “constitutional right to speak and assemble.” She has been particularly critical of what she calls “draconian” lockdowns imposed after the COVID-19 outbreak.

Regarding their path forward, Thomas said, “We’re exploring all of our options to remedy this situation as fast as possible.”

Vickie told the New York Post after her election that “under no circumstances” would her staff be required to disclose their vaccination status, and vowed to fight not just on behalf of herself and her staff, but for all of her constituents: “Should the mandates continue indefinitely, my office is exploring all available options to protect the livelihoods and liberty of my constituents, staff, and all New Yorkers,” she said in late November.

While public support for Vickie’s stance from Democrat-dominated fellow New York City Council members is scarce, Thomas shared with LifeSiteNews, “In conversations we’ve had with other Democrats, we’ve definitely gotten the sense that the mandates are nowhere near as universally accepted as the media might want us to believe.”