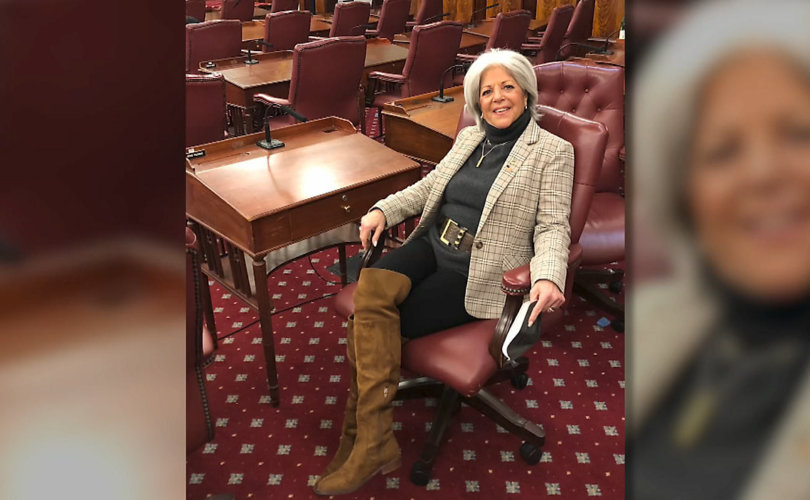 NEW YORK CITY (LifeSiteNews) — A New York City Council member who was previously barred from the Council Chamber floor for refusing to provide proof of vaccination can now join its proceedings after having been granted a religious exemption.

Vickie Paladino, who was elected as NYC Council member on November 17 representing several neighborhoods in Queens, was denied access to the NYC Council chamber floor on January 5, her first day of Council session, during which she had to participate remotely from Minority Leader Joe Borelli’s office.

At the time, Paladino had chosen not to immediately push for access to the chamber floor “out of respect for the speaker’s nomination,” but she made clear that day on Twitter that she would “fight the mandates with every resource available,” adding, “Going forward, if anyone has a problem with me in the chamber, they will have to remove me.”

Thomas Paladino, Vickie’s son and chief political adviser, told LifeSiteNews that a few days before the Council’s next meeting on January 20 his mother was granted her exemption by NYC Council legal staff.

Thomas said that while his mother, who is a Catholic, is religiously opposed to the currently available “vaccines,” her position is that “nobody should have to disclose this one way or the other.”

“Regardless of whether you choose to be vaccinated or choose not to be vaccinated, that’s a decision that you’re making on your own,” he continued. “And it is none of anybody’s business, least of all the government, to interfere with that decision, or to demand something of you in that regard.”

“And then that invites all kinds of legal action. And at the end of the day, they don’t want to do anything that’s going to invite legal action,” said Thomas, although he also made a point to give credit to Council Speaker Adrienne Adams for being “extremely gracious” toward them.

Thomas noted that “a couple of journalists” questioned his mother’s religious exemption, saying  “the pope says that it’s everybody’s religious duty to go get vaccinated.”

“As if the pope was a dictator that we have to all obey. These people display a fundamental lack of understanding of what religious faith and what religious belief even is,” said Thomas.

While acknowledging that this is a positive turn of events for his mother, Thomas emphasized, ”This is not about us, this is not about Vickie Paladino. This is about our fight for the entire city.”

He continued, “This does not end here. We are going to continue to take action against these mandates in any way that we can. And this isn’t going to be over until everybody in New York City is free from the mandates as well, and is free to exercise their conscience in any way they see fit.”

Thomas had noted to LifeSiteNews in a previous interview that opposition to COVID shot mandates has been a “cornerstone” of his mother’s campaign. Indeed, much of her platform has directly opposed New York City’s prevailing policies initiated under former Mayor Bill de Blasio. She has focused on the importance of supporting law and order in the city, reopening businesses, and restoring freedom to employees and others burdened by COVID mandates.

In fact, Vickie was launched to fame — and soon after, into politics — after a video of her confrontation of de Blasio on his lack of support of NYC police and his trip to Germany to join a protest against “nationalism” went viral.

“Look, are people dropping dead to the left and the right of you? No, they’re not,” she told NY1 in a recent interview.

“I don’t need to show you my papers. This is not Nazi Germany,” she remarked.

New York City was one the first major cities in the United States to require proof of injection or COVID-19 tests for all government workers, before expanding that requirement to all private sector employees performing in-person work.