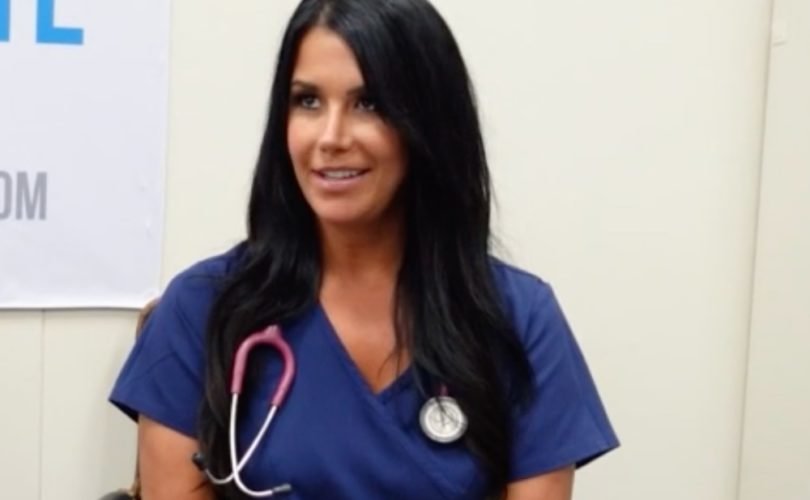 TULSA, Oklahoma, April 26, 2021 (LifeSiteNews) — Erin Maria Olzewski, the whistleblower nurse who made headlines last year documenting “fraud, negligence, and greed” that “led to unnecessary deaths” during the peak of the COVID-19 pandemic, sat down with LifeSiteNews during the Health & Freedom Conference to share her experience and reflections.

Olzewski (pronounced OL-CHEZ-SKEE), whose findings were first brought to light in a viral June video titled “Perspectives on the Pandemic: The (Undercover) Epicenter Nurse,” received a strong appreciative reception from the sold-out, 4,000-person event held at Rhema Bible College.

A native of Wisconsin, yet a current resident of the Tampa, Florida area, Olzewski, explained how she volunteered to temporarily work as a travel nurse in New York City telling LifeSite’s Rebekah Roberts, “we weren’t seeing a large influx of [COVID-19] patients” in Florida.

Also being an Army combat veteran who served in Iraq from 2003 to 2004, Olzewski mentioned how she decided to enter another type of “frontlines war zone,” by serving those in greater need at the “epicenter” of the pandemic.

Upon arrival she was surprised to find that she “sat around for three days with nothing to do” and learned that other nurses had been “sitting around for 21 days or an entire month getting paid $10,000 a week,” without any assignment. “If they needed nurses so badly, why are you bringing me here if there’s nurses sitting around?” she asked, describing this as her first “red flag” that the reality of the situation in New York was not what was being reported in the news media.

And, “lucky me,” she said with a smile and a touch of sarcasm, “I did get assigned to Elmhurst Hospital [in Queens] which ended up being ‘the epicenter of the epicenter’” for reported COVID-19 fatalities.

“The very first day [at Elmhurst] I was shocked. It was something I’ve never seen before,” she said. “Patients were alone in the rooms on ventilators [with] no family allowed in [to advocate for them]. People were just dying from gross negligence, medical malpractice, [and] mismanagement.”

“For me, that was really difficult to swallow. Everything made sense to me at that moment of why there were so many deaths in New York,” she said.

Following a good cry back in her hotel room, she eventually contacted an attorney in New York, secured a “pair of spyglasses” and began to document what she saw in the hospital.

“I recorded them murdering patients. I recorded just the complete and absolute disregard for human life,” she said.

According to the video, Olzewski revealed how patients who repeatedly tested negative for COVID-19 were being described as “COVID confirmed” in their charts, which triggered a higher compensation from government payouts.

She contrasted the treatments that they had provided in Florida to what was happening in New York. “[In Florida] we treated our patients with hydroxychloroquine, zinc … sent them home and they were fine.” In New York, “they were banning alternative treatments like hydroxychloroquine. The only thing they could do was to put people on ventilators.”

At the time, the Department of Health and Human Services (HHS) provided what some called “perverse incentives” instituted by government COVID-19 relief funding, which awarded significantly more compensation to hospitals should patients be classified as COVID-19 positive ($13,000) or if they are put on a ventilator ($39,000).

Olzewski indicated these incentives dramatically impacted what was happening at Elmhurst. “You know, $13,000 to admit [COVID-19 classified] patients, and they were just admitting everybody.”

She further alleged that with the $39,000 incentive, the hospital would then put admitted patients “on a ventilator that they knew would kill them.” In addition, “in some cases” there was an incentive of “$10,000 [for] every death.” With families kicked out and not being able to monitor, it was “the perfect storm, and people took advantage of it.”

Reflecting on lockdowns last year, and presently in some places, she said they have always been “completely uncalled for. People stayed home and got even more sick, so that caused even more deaths.”

As most states sought to justify their lockdowns on statistics coming out of New York, Olzewski criticized the injustice of “taking away peoples’ freedoms based on New York numbers … which now we know we’re lies.” Much of these high fatality rates, she said, came from “[Gov. Andrew] Cuomo putting these [COVID-19] patients into nursing homes” spreading the infection through members of the most vulnerable population.

New York state nursing home deaths for the period topped 15,000, and following Cuomo’s cover-up of these figures, there have been many calls for his resignation even from members of his own Democratic party.

“But the lockdowns are causing a lot more harm” than the virus, Olzewski said. These include  “emotional issues, depression, suicide, just the mal-health of everybody who is living in fear itself. It’s just no way to live. It’s un-American to take away freedoms based on a false narrative.”

With regards to advice, she emphasized the need to focus on one’s health using natural methods. “No one is focusing on preventative health and what you can do. Quercetin is a natural alternative to hydroxychloroquine, you can get over-the-counter, take it with zinc, vitamin C, get outside, [and get] good exercise. Get healthy, [and] drink water,” she said.

“Be brave. Be bold. And step outside of your comfort zone. If you see something say something and think about future generations to come. If you don’t fight right now, then who’s going to do it? Who is going to fight? For me, [the incentive] is my kids… It’s our future generations. And the time is now to step up and to change the world. We can’t let them steal [our freedom] from us,” Olzewski concluded.

More information on her revelations can be found in Olzewski’s book, Undercover Epicenter Nurse: How Fraud, Negligence, and Greed Led to Unnecessary Deaths at Elmhurst Hospital, by visiting Global Frontline Nurses, or Erin’s specific page here.