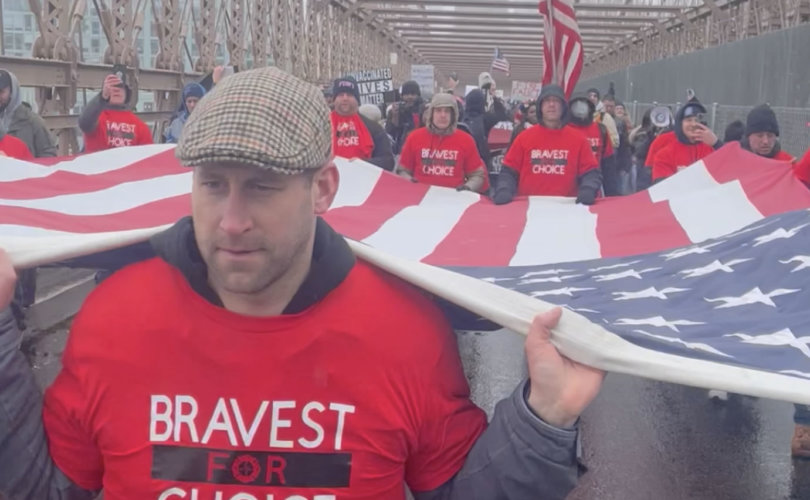 Marching across Brooklyn Bridge to City Hall, the group expressed solidarity with the Canadian Truckers Freedom Convoy protesting COVID-19 vaccine mandates and passports, and which remains under sinister attack by the Canadian government and legacy media in that country and here in the United States.

Dubbed “RipItUp,” many who are vaccinated joined the unvaccinated in support of medical freedom by publicly ripping up their “vaccination passports,” — a document that allows people to move about freely in public spaces in New York City.

Firefighters, Transit Workers and others tear up their vaccination passports aka segregation passes at City Hall.

“Although originally it was the unjust terminations which brought us all together to march over the Brooklyn Bridge once again, we all knew it was much more, as this fight is not specific or isolated to NYC, it’s a worldwide fight against ‘medical tyranny; and ‘medical segregation,’” one recently retired first responder who attended the event told LifeSiteNews.

Although not necessarily planned, the overriding theme of yesterday’s event just naturally evolved into a heartfelt show of support for our brothers and sisters up in Canada, where the Canadians have taken this fight to the next level, with courage rooted in “true charity,” as opposed to Trudeau’s belief in government “coerced charity,” which is nothing less than tyranny! These brave Canadians continue to “fight the good fight!”

“Right now, I am praying for all those Canadians who have become targets of the tyrannical Trudeau government,” he added.

“Essential workers are essential for a reason,” said NYC firefighter Paul Schweit in a tweeted video. “They protect the citizens of New York City because they signed up to be of service.”

“We’re not asking for much,” he continued. “We’re asking for negotiations, for the freedom to choose.”

“We’re asking for fair treatment,” Schweit said. “Nobody should be losing their job over this.”

“No medical tyranny, no vaccine mandates” and “My body, my choice. The vaccine you will not force” – FDNY Firefighter Paul Schweit, founder of Braves for Choice, an FDNY anti-vaccine mandate grouphttps://t.co/iJSybOD42A pic.twitter.com/iYZogzsinB

“They’re not being terminated, they are quitting,” insisted the mayor, according to ABC7NY News, in an attempt to justify his stance. “Because if the rules of you being employed means ‘vaccinated’ and you’re not, that is a decision you’re making, not a decision we’re making as a city. I say don’t quit on New York. Take your vaccine and booster shot.”

Despite the ongoing intractability of the city’s mayor, New York Gov. Kathy Hochul has sent out signals that her state’s indoor vaccine and mask mandates — which are set to expire on Thursday, February 10 —  could be lifted as early as tomorrow.

Many of those marching yesterday are members of Bravest for Choice, “Firefighters, Medics and EMTs who have been serving New York City throughout the entire pandemic [who] are being sent home due an unjust, unnecessary mandate.”

These men and women want to work. They want to keep serving the public. They simply cannot comply with the mandate due to religious, medical or personal reasons.

Just let them have a CHOICE.