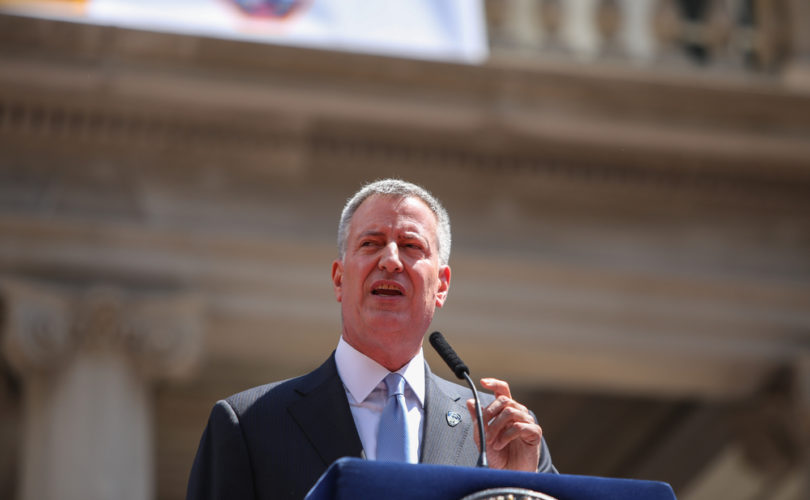 The mayor's edict is called, “Access to Single-Sex City Facilities Consistent With Gender Identity and Expression.”  It means that all New York City single-gender facilities must accommodate both sexes, including city buildings and offices, parks, children's playgrounds, swimming pools, and more, all access given without showing identification or any proof of gender.

Mayor de Blasio declared that transgenders using opposite sex bathrooms and locker rooms “is a fundamental human right that should not be restricted or denied to any individual.”

Ironically, he added, “Every New Yorker should feel safe in our city.”  Critics question whether the mayor includes those who do not feel safe in public showers and toilets that the opposite sex may undress in and use, or if he only refers to making the gender confused feel more comfortable in their ailment.

“Second, the Mayor’s order is based on the confused notion that a person’s gender is a legal construct ‘assigned at birth,’ rather than a biological reality,” Hayford explained.

“Third, and most importantly, the Mayor’s order completely fails to take into account the negative impact that opposite-sex restroom and locker room use by ‘transgender’ individuals in City facilities would have upon other users of those facilities.”

Family Policy of Washington Executive Director Joseph Backholm was one of the critics questioning de Blasio, suggesting that transgender people aren't the only ones who need to feel safe and whose rights need to be protected.

“All have legal rights to privacy,” Backholm said.  “The problem is governments choosing one person's rights over everybody else.”

“Everybody has an interest here, and we need to behave like adults and make sure that nobody gets to say my rights trump your rights because I say so,” he said.