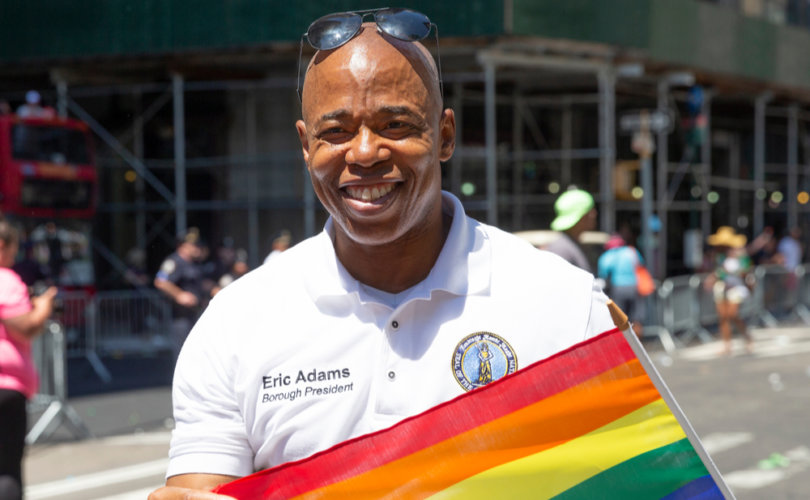 NEW YORK CITY (LifeSiteNews) – New York City Mayor Eric Adams has come under fire after throwing his full support behind drag queen “storytellers,” stating that the adult performers are “advancing a love of diversity” in the schools where they perform.

In a Friday tweet, Adams wrote that the drag performers “and the libraries and schools that support them, are advancing a love of diversity, personal expression, and literacy that is core to what our city embraces.”

Drag storytellers, and the libraries and schools that support them, are advancing a love of diversity, personal expression, and literacy that is core to what our city embraces.

The NYC mayor added that “LGBTQ+ communities are under increased attack across this country” and that “we must use our education system to educate.”

“The goal” of incorporating men in dresses and makeup telling stories to children into the education system, according to Adams, “is not only for our children to be academically smart, but also emotionally intelligent.”

Adams’ remarks drew widespread ridicule, with some commenters pointing out that young children ought not to be exposed to inappropriate and sexually charged adult themes, while others simply called the mayor a “creep.”

In response to the mayor’s tweet, conservative Christian commentator Lauren Chen asked why so many left-wing politicians are “making drag queens for kids their hill to die on” and refusing to state that drag queens are “not family friendly.”

Why are so many on the left making drag queens for kids their hill to die on?

They could literally just say “We stand with the LGBT community, but this form of entertainment is not family-friendly.”

That’s really all it would take.

But they won’t do it. https://t.co/OH3QRHQBgw

Journalist and comedian Pat Dixon argued that the push for drag queen story reading is not about “advancing a love of diversity” but rather is “about destroying traditional values.”

It’s not about “advancing a love of diversity,” it’s about destroying traditional values. https://t.co/JZqgYOALiM

Canadian clinical psychologist Dr. Jordan Peterson simply tweeted that Adams’ comments prove “[we] are out of our minds.”

“Yes, Democrats, this is the hill you should die on. Bring this all the way to the midterms. Great political strategy,” political commentator Matt Walsh tweeted, while his Daily Wire colleague Ben Shapiro wrote that “‘Drag queens for the children’ is one hell of a 2022 slogan.”

Adams’ comments came in response to criticism by New York City Council member Vickie Paladino over the city funding “Drag Queen Story Hour” sessions since 2017 to the tune of $207,000, the New York Post reported June 11. The publication noted that in May alone some $46,000 of taxpayer money had been spent on drag performers from Drag Story Hour NYC.

The group has already delivered 49 programs to children as young as 3 years old in 34 public elementary, middle, and high schools within the city’s five boroughs since the beginning of the year, the Post reported.

Paladino, a Republican, said she is now “considering pulling funding to any school in my district [Queens] that is implementing Drag Queen Story Hour.”

“We are taking hundreds of thousands of dollars out of the pockets of hardworking New York taxpayers … to fund a program teaching little children about their gender fluidity? Not on my watch,” she added.

The councilwoman later doubled down on her comments, tweeting on June 13 that “’drag queen’ degeneracy” has “no business in our schools” as it constitutes “child grooming.”

I am quoted in this article, and I will reiterate: Any school in my district participating in ‘drag queen’ degeneracy risks losing their funding.

Adult drag performers have NO BUSINESS in our schools, and they will not be in my district. Period. https://t.co/rCKuvYNW0K

“NYC is spending taxpayer dollars to bring adult drag queens into elementary schools across the city to perform for small children. This is unacceptable and grotesque, and follows a deeply disturbing national pattern,” she wrote.